Declan Bohan: When Leitrim's dreams turned into a reality in the 1994 Connacht Final

Leitrim PRO Declan Bohan writes of his memories of 1994, what it was like to see Leitrim finally lift the Nestor Cup and the madness that followed 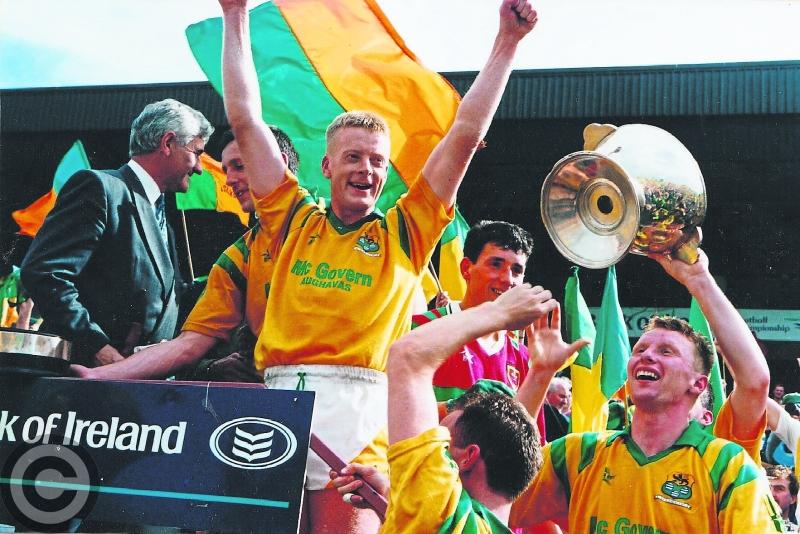 It’s hard to believe that a quarter century has elapsed since the halcyon days that made 1994 such a special year in the annals of Leitrim GAA.
As my late uncle, Tony Hayden, was a member of those great Leitrim teams of the late 1950’s, which contested and should have captured at least one Connacht title in that era, I often wondered if I would ever have the privilege of witnessing my county at that stage of the Connacht Championship, having no memory of the 1967 version of events.
However, in the early years of the 90s, there was a Leitrim storm brewing. Successive improved league campaigns raised hope with each approaching summer. However, the Rossies put paid to our dreams in 4 four successive seasons!
The championship draw of 1994 was as tough as it could get and we headed to the Hyde with renewed hope following a solid Division 2 League campaign that had yielded a very respectable return of four victories and three losses with a comfortable mid table finish.
Proving that five in a row is a hard feat to accomplish, (Dubs be warned!!) the Rossies were outdone as Declan Darcy’s last gasp 45 sailed over the bar to rapturous acclaim and the show was well and truly on the road! One down but the task was only beginning.
Onwards to Páirc Seán and a joust with the Tribesmen four weeks later. Having lowered the maroon flag in Tuam the previous season confidence was high on that July day that we would topple them again at home. However, a stop start encounter saw us gasping for air as the Galway men held the minimum advantage in the closing stages before up stepped Darcy again to sail a free between the Galway uprights and we lived to fight another day.
Could lightening strike twice in Tuam in successive seasons as we headed west a week later for the replay?
You’re right it could and it did as we comfortably accounted for the Galway challenge at the second time of asking and the Connacht Final place was assured. We were in dreamland!
July 24, 1994 was to be deliverance day.
We headed to the Hyde and it seemed as if every Leitrim man, woman and child had descended on the ground to witness history but Mayo stood in our path. The hope, anticipation that accompanied us was splashed with a reality check as Mayo hit the net in the early seconds.
But these lads were made of sterner stuff and recovered quickly. As the game wore on, it became increasingly likely that what seemed an impossible dream for generations of Leitrim was about to become reality.
A late Mayo penalty resulted in a second major and we were left sweating but with Mick Curley’s long whistle unbridled joy broke out and we had reached the Promised Land. 67 years of Leitrim hurt washed away in an instant!
The journey home from the Hyde was a joyous one. From Roscommon, through Ballyleague and onto Scramogue and through Rooskey the people of Roscommon were outside houses and hostelries as they cheered us home. We returned and celebrated well into the night and so we should.
The following day, it appeared that all of Leitrim had taken an unofficial Bank Holiday. We descended on Jimmy’s of Dromod around lunchtime as the word filtered that Jimmy O’Connor was hosting the team in advance of its tour of the county.
This particular day was probably even more enjoyable than the previous one as the reality sunk in and Leitrim was the talk of the entire country. Our sense of achievement was now a living reality.
We looked forward to the All-Ireland semi final and a joust with the mighty Dubs in their own backyard. It was all now about the scramble for tickets and as Bornacoola GAA Club Secretary at that time, I found myself at the coal-face of a frenzied fever.
Panic ordering and double ordering, tickets allocated and reallocated but as the big day approached everybody was eventually satisfied and we headed for the smoke early on Saturday morning to make the most of the weekend.
There were now only three teams in the All-Ireland race, Down, Dublin and Leitrim, it almost seemed unbelievable but it was true!
A friendly club match with a local Dublin team of around Division 10 standard had been arranged and was fulfilled and it was down to the serious business of getting ready for the social aspect of the weekend. It seemed as if the city was awash with green and gold.
The day passed into night and suddenly the morning was on us as we headed to Croker. The anticipation, the hope, the sheer joy of being there to witness our own running out on the hallowed turf.
As Declan Darcy led his team out the roar of the Leitrim people must have reverberated around the city as it seemed like we outnumbered the Dubs among the 55,000 attendance at the now redeveloping stadium. The roar reached crescendo levels as Noel Moran kicked us into the lead.
We were dreaming of an All-Ireland! But gradually the Dubs reeled us in a goal on the stroke of half time put daylight between the teams. We supported them to the final whistle but the All-Ireland dream was over!
Eventually we left the city at some stage on Monday afternoon tired, hoarse but extremely proud to have witnessed and been part of a season that just seemed a mere pipe-dream a few short years previous. Having attended a number of All-Ireland semi finals in the late 80’s and early 90’s, on one of those days I remarked to a friend “What must it like to be supporting your own county in Croke Park on All-Ireland Semi Final Day?”
A quarter century later I say mile buíochas to the Leitrim players and management of 1994 who turned a once young man’s dream into reality and fashioned memories to last a lifetime!