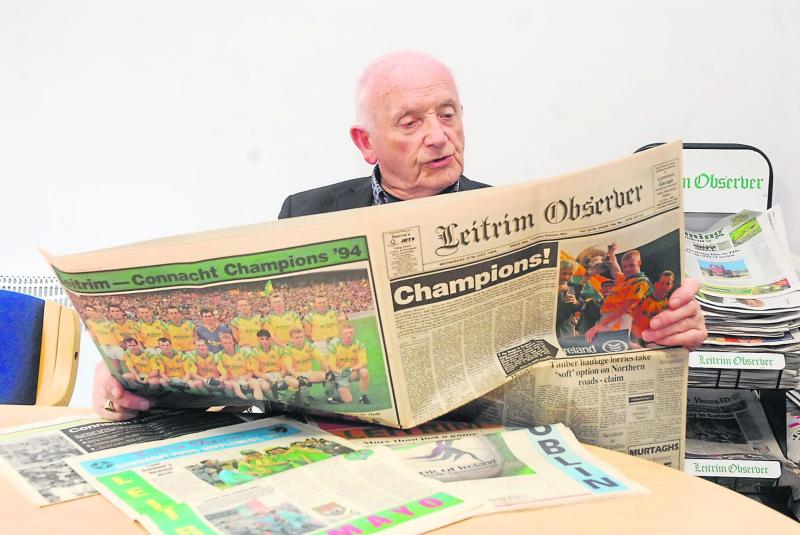 We had the best team in Connacht - it only happens once in a lifetime,” reflects Tommy Moran who was Leitrim GAA County Board Secretary in 1994 and during an era of unprecedented success for Leitrim football.
While the players were training and the management team were strategising, it was left to Leitrim County Board to find the money and push the dream of a Connacht title.

Background
Tommy explains “Four to five years before 1994, things were at an all-time-low, we were doing badly in the National League and being walloped in the Championship.”
County Board Chairman Tony McGowan suggested bringing in PJ Carroll from Cavan to manage the team. “We were not a very attractive proposition at the time … but he agreed.” Moran says PJ Carroll who worked in the Anglo Celt newspaper was a “marvellous motivator, he laid down the law for the boys.”

According to Tommy, PJ Carroll wanted to bring that “winning feeling” to Leitrim, “PJ wanted every Leitrim team; minor, U16s etc to win. It didn't matter if it was a challenge game or the opening of a park. He stressed the importance of winning. He wanted more respect for Leitrim and the players responded to him.
“PJ would always pick a team we could beat. Monaghan weren’t that good back then, he would arrange a game with them, the next week he would have a big report in the Anglo Celt ‘Leitrim hammer Monaghan again’ - it was a great boost for Leitrim.”
Tommy said PJ would tell the players that Kildare called Leitrim “bog men” he would rally them up before a game. And it worked, Leitrim started winning and crowds returned to the games. The County Board started a supporters club, they now needed to organise buses for fans to travel to games, the team started being invited to pitch openings around the region.
PJ Carroll managed Leitrim U21s to a Connacht title in 1991, “A lot of the senior players were on that. Declan Darcy was captain of the Leitrim U21s - he is the only man to captain two Leitrim teams to Connacht glory.”
Leitrim also won the All Ireland B Championship under PJ Carroll: “He handed over a good team to John O’Mahony.”

John O’Mahony
Tommy explains that himself, Eamon Tubman (RIP) and Brendan Gormley went to Boyle for a top secret meeting with John O’Mahony. “John didn’t rush in, he asked about training and facilities first. I did a tour of the county with him to show clubs and pitches. He met some of the players in secret to see about commitment - but we got him.”
“He came in 1993, we were playing Galway in Tuam - Galway had a sign over us, they always had the beating of us. If you got the worse team in Ireland and put Galway jerseys on them, they could beat us.”
John started working on the players' heads. “We knew we had a good team, we just needed them to believe it.”
O'Mahony was very particular, everything needed to be perfect - even the buses.
“Team buses had to be high, he didn't want a low bus. He didn’t want players to be looking up at people, it was important that the players be high up, looking down. He used to check the registration plate, to make sure it was a newer bus, he didn't want us in an old bus. Simply the Best and Nothing is going to stop us now would be blaring through the bus on the way to games,” Tommy remembers with a laugh.

O’Mahony also demanded that the team eat in a secret location before championship games “so people wouldn't be slapping the lads on the back to wish them good luck and annoying them.”
“We bet Galway in Tuam in 1993, we hadn’t beaten Galway since 1949 - the place went mad. It was like we won Connacht, Roscommon beat us in the next game - we came so close in 1993.”
Then O’Mahony brought in Bill Cogan, a motivator. “He had the first mobile phone I was ever conscious of, he told us 99% of football was in your head.” There were group and one to one sessions with all players and everyone in the backroom team, “even we had to put out the right message.”
Tommy said there were a lot of backroom team meetings and he paid tribute to Dr Declan Loftus whose “contribution was never properly acknowledged, he treated them and prevented injuries. He was dedicated.”

All go for 94
New buses, motivators, new tracksuits, secret location dining, training in Kells, physio bills - it all cost money. Tommy says, “The money just had to be found, we knew this was the team, we were all go for 1994.”
As the belief mounted, they started to receive funds, bigger sponsors came on board, donations from support clubs and Leitrim Associations started to help the coffers.
When the championship draw was made “We had to beat Roscommon and Galway and Mayo - all the best teams to win Connacht.”

“With a bit of luck” Leitrim got into the Connacht Final and Tommy said “the national media went mad!”
“We were fielding calls from every national paper, everyone wanted a bit for Leitrim. There was a lot of focus on Tom Gannon, captain of the Leitrim 1927 team to win Connacht, he was in his 90s, but he was articulate.”
Tommy was getting calls from all over the world from Leitrim men and women looking for tickets for the Connacht Final.
Tommy Moran hates the term “north Leitrim” and he says in 1994 the county was truly united as one, “there was green and gold everywhere you turned, flags on silage pits, hay sheds scaffolding - flags all over the place.”
A student summer scheme opened a shop in Ballinamore selling Leitrim flags and banners. “A fellow arrived in Ballinamore from the north, he started printing the back of the jerseys. He was three days in Ballinamore he couldn't get out there were queues through the town, everyone wanted their name on the Leitrim jersey and flag.”
All club games were held back until after the championship, “all the clubs agreed, we were winning they couldn't complain!”
And then Leitrim won the Connacht Title and the whole county stopped to celebrate. Except of course there was a homecoming to arrange and a semi final to prepare for. 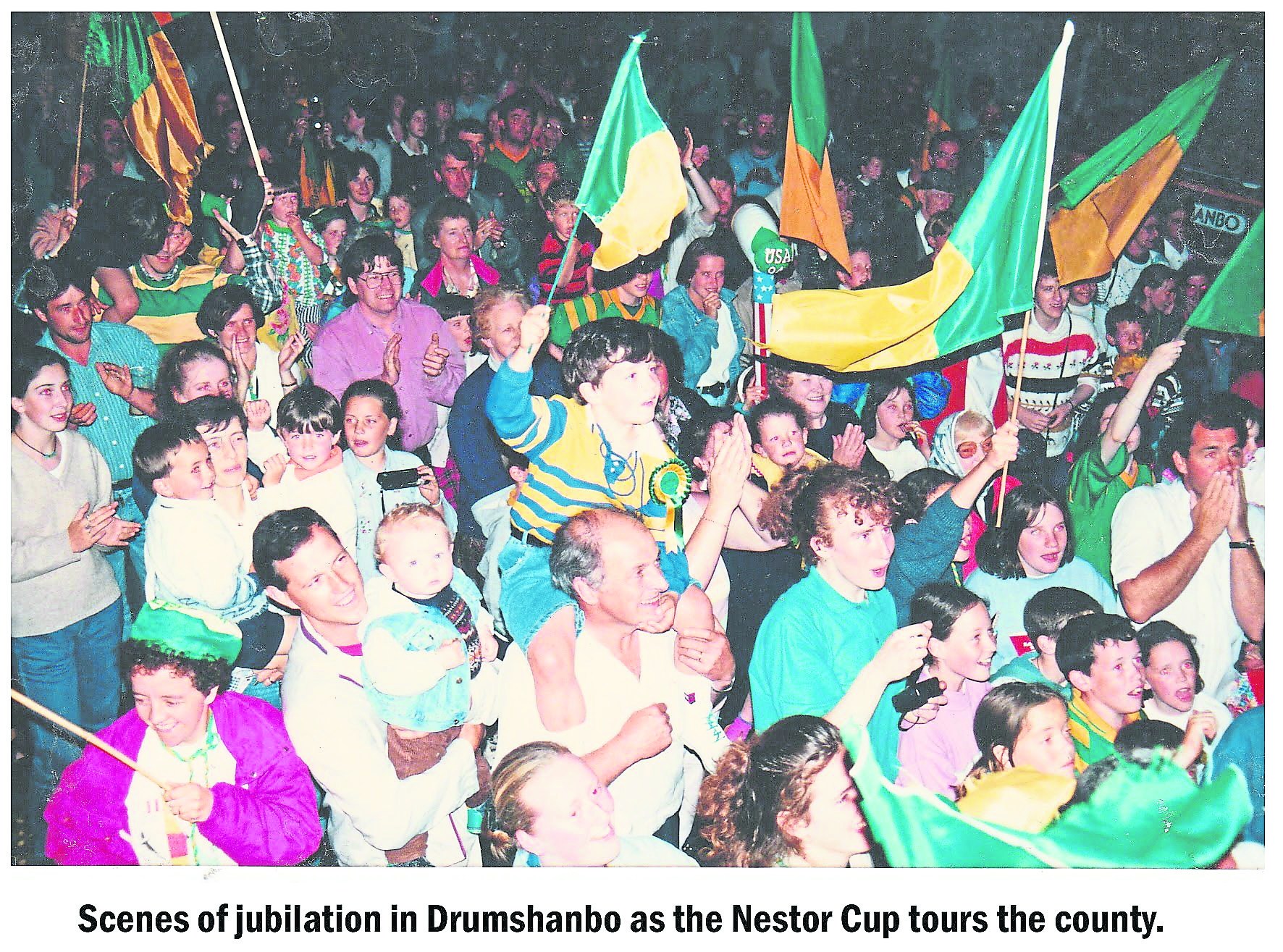 The Homecoming
“We didn't prepare too much for the win, we didn't want to play with fate,” explains the former county secretary. “Louis Quinn from Ballinamore was a school bus Inspector, he got us an open top bus. We hid it around Gings and we arranged for a lorry in front of the Town Clock in Carrick. That was our preparation.”
Leitrim also had two Bishops Cathal Daly and Francis McKiernan on their side, they were almost first in the dressing room to congratulate the boys.

“The thing I remember the most was crossing the bridge, the Shannon with the cup. It was marvellous, we couldn't believe the crowds, we just crawled over.”
They went down Carrick's Main Street to the lorry at the clock and someone noticed that there were only 34 Leitrim team t-shirts instead of a squad of 35.
“I said to Tony McGowan, I bet you it is Paul Kiernan missing - then I saw Paul coming up the street eating a burger. The bus was going so slow crossing the bridge, he got off and ordered a burger and chips. He told me ' I didn't think the people would be so excited.' I told him we haven't won it in 67 years of course they are bloody excited, I kicked him onto the lorry , he was so laid back!”

Tommy thought the homecoming tour of the county should be spread over a number of days, but the excitement was too much for people to wait so on the Monday they met in Dromod, went to Leitrim Village, Drumkeerin, Dromahair, Killargue & Manorhamilton.
“The day was getting on but we kept going north” to Kinlough, Tullaghan, Kiltyclogher and Glenfarne.
After a long stop to eat (and drink) in Drumshanbo, they continued onto Keshcarrigan, Fenagh, Gortletteragh, Mohill, Cloone, Aughavas and Carrigallen.

“We made Drumreilly at 3am, Fr Flynn had the children's band out playing, they were waiting from 12 midnight and we listened to them for 45 minutes! We eventually staggered into Ballinamore at 4am, the town was packed, there was children everywhere! I don't think people went to bed that week at all!”
Tommy said they were disappointed with the All-Ireland Semi-Final performance against Dublin but that didn't stop the celebrations, they were treated like royalty everywhere they went.

Only right and proper!