Liam sets sights on a marathon Christmas with unique event 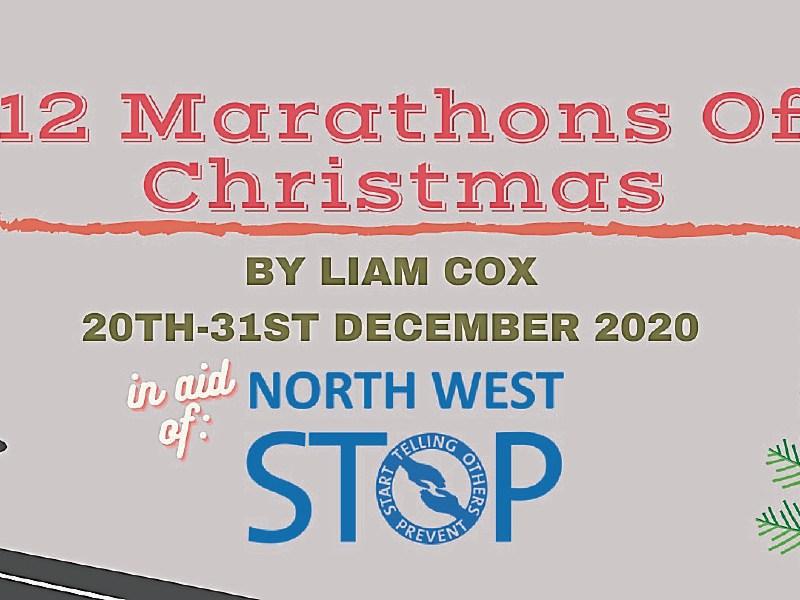 Some people describe the Christmas as a marathon but that might be in terms of the celebrations. But for one Leitrim runner, this Christmas will literally be a marathon as Liam Cox is running 12 full marathons for the 12 days of Christmas!

Frank Kelly's legendary 12 Days of Christmas song will seem like child's play for Liam Cox, who hails from just outside Leitrim Village on the Carrick side, when he tackles 12 full 26.2 marathons on 12 days over the festive season, including one on Christmas Day!

Starting on Sunday December 20, Liam will run a marathon a day for 12 days (including Christmas Day) finishing on New Year’s Eve in Carrick-on-Shannon in an almost unbelievable feat of human endurance and will.

Liam will be running across three or four different routes depending on the latest Covid-19 guidelines. Each day will consist of running 42.2km resulting in over 500km after the 12 days!

One marathon would be taxing for anybody but 12 in a row on 12 successive days in the depths of winter isn't exactly what most of us might consider a Christmas holiday.

So where exactly does one get the idea of trying something as strenuous as this!

Speaking to the Observer, Liam said “I was at a running event in Peru last December and met a Cork lady called Joanne Fearon who had done 12 Marathons of Christmas in 2013, so that's where I got the concept idea from. I thought that would be a cool thing to do one day!

“As 2020 progressed and most races were cancelled, I thought this year was the perfect year to do a challenge like this.”

However, the festive season very definitely get a look in on this incredible venture as Liam will be raising some much-needed funds for North West Stop along the way.

Explaining his motivation, Liam says “More importantly than all of this is however the connection with the charity North West Stop. As you know charities fundraising efforts have been badly effected by COVID this year.

“With NW Stop being a charity that offers counseling services, I feel like 2020 is also a perfect time to raise money for this charity as their services are needed now more than ever. I think everyone I know has struggled at times this year.

“Christmas can also be a time were people struggle so I think its a poignant to do the challenge at this time of year.”

North West Stop have been providing a free & confidential counseling service for anyone in need of support for over 15 years in the North West region. Given event’s of 2020, their services are in as much demand and needed more than ever.

Liam will also be looking for local runners to come out and support his efforts over his Christmas marathon effort so anyone who fancies tackling a marathon over the Christmas or even part of a marathon that would be available as a support runner would be most welcome.

If you would like to kindly donate you can do so via www.idonate.ie/12 MarathonsofChristmas.

Liam would appreciate any support from sponsorship from local businesses.

Liam will also be seeking support runners throughout the event and you can contact at Liamcox13@yahoo.com or on Instagram @Liamcox93.