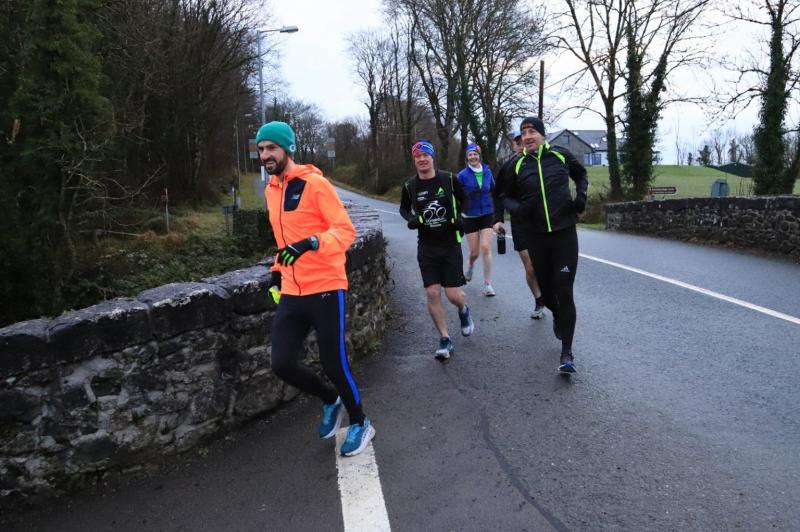 Liam Cox and his team of support runners start off on marathon number 11 in Battlebridge Picture: Mark Kelly

Nobody but nobody who has ever completed a marathon would call it easy but for Liam Cox, the final 26.2 miles of his epic 12 Marathons of Christmas on New Year's Eve will probably feel like a stroll in the park after he completed his 11th marathon today (Wednesday, December 30).

Liam's incredible feat of endurance, all in aid of North West STOP, saw him complete his penultimate outing today alongside the Leitrim to Drumshanbo Blueway in probably the toughest conditions he has faced so far, the cold ensuring that parts of the canal were actually frozen over!

Amazingly, the Leitrim Village former international rower has got faster as the finish line approaches on his, no pun intended, marathon endeavours, Liam clocking a time of 3 hours 56 minutes today, following on a sub four hour outing on Tuesday when he covered the distance in 3 hours 57 minutes. Before that, he had been averaging a time of over four hours.

Liam is due to finish the last of his 12 marathons tomorrow, on New Year's Eve, Thursday, December 31, on the Quays in Carrick-on-Shannon around 1pm and is sure to be greeted by a great crowd of fans and well-wishers.

Liam has raised nearly 14 thousand euro so far for North West STOP and anyone wishing to donate can do so via  https://www.idonate.ie/fundraiser/11390433_liam-cox-s-page.html.