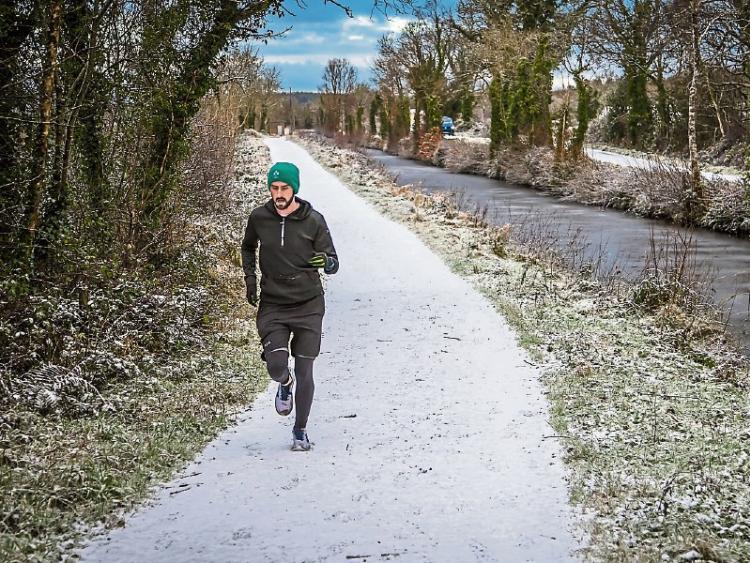 The loneliness of the long distance runner! Liam Cox endures the cold and icy conditions on New Year's Eve as he runs along the Leitrim Village to Drumshanbo Blueway Picture: Mark Kelly

First things first! Having endured rain, hail, sleet and snow to run over 300 miles across 12 days in almost sub zero conditions, would Liam Cox undertake the “12 Marathons of Christmas” again?

A long and hearty laugh from the Leitrim Village man greeted the question when the Observer chatted to Liam on Monday, a few days after his incredible achievement of completing 12 full marathons over 12 days of Christmas and raising an astonishing sum in excess of €33,000 in aid of North West STOP.

“What they will be, I don’t know at this point. It definitely won’t be the last I will do of these types of challenges.”

“I didn’t expect the turnout to be what it was - people I never met came out running with me, sharing stuff on social media or whatever it was. Loads of people just got involved - I think people in the community really became a part of it which is the nice thing about it.

“I got a huge amount out of the entire experience, it goes back to the way I got involved in it and the whole community feel of it, I did enjoy the whole block of starting with a goal, figuring out how to go about it and getting to the start line in good shape, getting through the challenge - that whole process was really enjoyable. And there was a great sense of achievement out of it obviously afterwards.”

It was a challenge that captured the imagination of the greater public with stories of Liam’s exploits featuring in national newspapers and it was something that actually took the former international rower aback!

“I had people every day! There were messages from people in Manorhamilton, Dromahair, Carrick, people who wanted to run with me or whatever. There was only one day at the start where I nearly had no company.”

Such was the response, it almost led to unexpected problems as Liam reveals “Towards the end, there were a couple of days I was nearly trying to get rid of people because I had too many people with Covid and everything like that.”

Liam is at a loss to explain how his 12 Marathons of Christmas challenge captured the imagination of so many! “I think, maybe going out on Christmas Day was a factor in it, people saw that and appreciated it.

“Carrick Rowing Club really got behind me and that struck me, I haven’t been properly involved in the Rowing Club in six or seven years and the support I got was incredible, people from the rowing club out running most of the days, on the bike, supporting me on social media.

“I wasn’t expecting that much support. Family and friends hugely got involved too, sharing stuff on social media, it is dangerous picking out people but the whole thing got a huge amount of support that I wasn’t expecting. It was a really big team effort.” 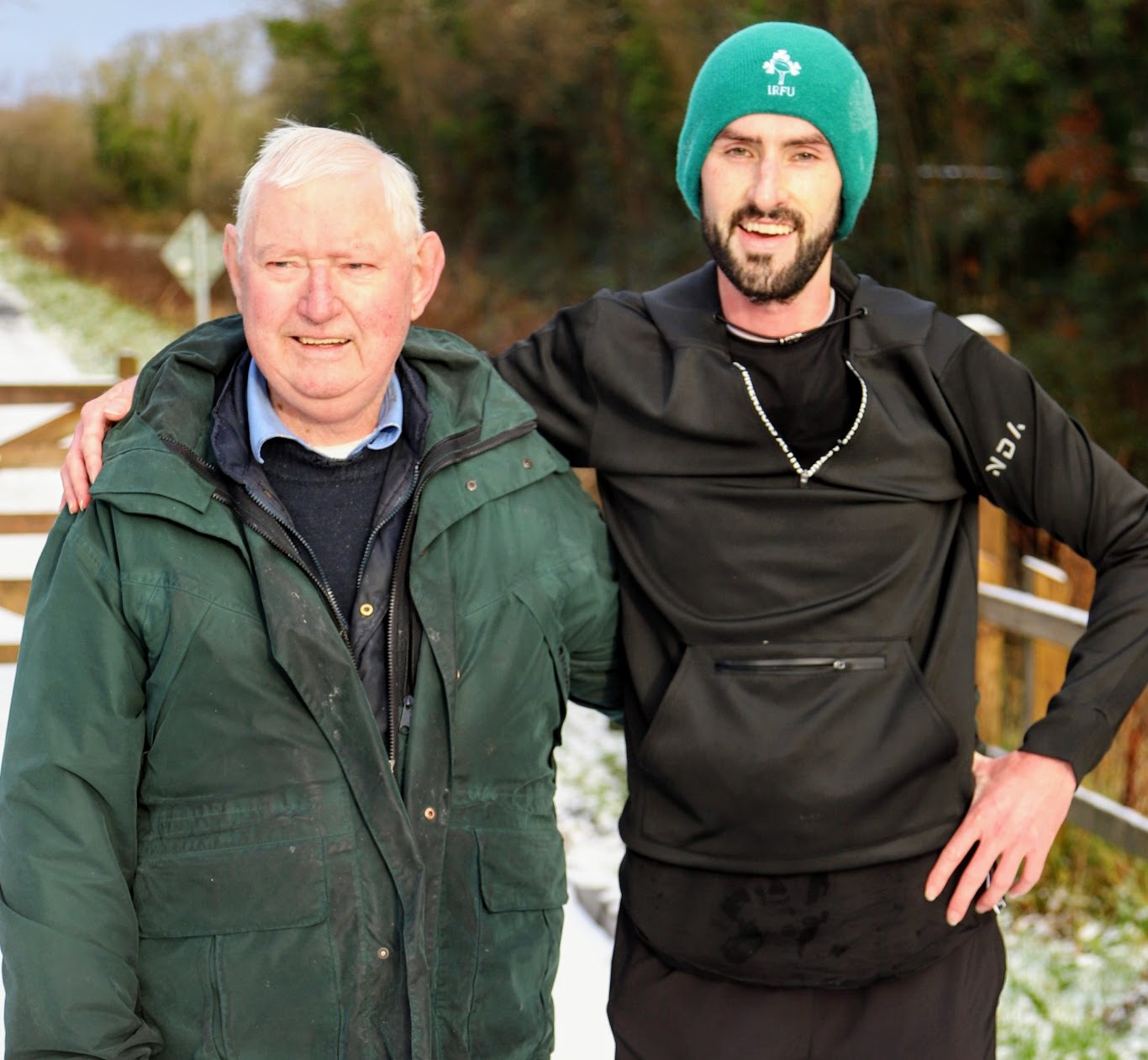 Liam Cox pictured with his father Gabriel after finishing his 12 Marathons of Christmas on New Year's Eve Picture: Mark Kelly

That support made a big difference to Liam’s efforts: “It just made the time go that bit easier, you’re not tending to look at the watch when you have someone to talk to or maybe distract you, you can lose the monotonous of the challenge a little bit when you’re not going the miles as much and the time goes by that much easier, you can have the bit of craic, a bit of a joke and you can lose yourself a bit.”

The challenges of running a marathon a day for 12 consecutive days in some of the worst weather of the year is particularly onerous but physically, Liam never felt under any pressure. Rather the pressure was in the mind!

“It was definitely the mental side of it more than the physical side of it, my body held up fairly well apart from one small issue I had,” recalls Liam, “The mental side of it, it was relentless after a while, I got into a routine of doing the same thing every day which was getting up, doing my routine in the morning, doing the marathon, recovering, eating, going to bed early and maybe doing some work online.

“I got into a routine and, mentally, it was quite tough. I got to day seven or eight and then we started to hit the patch of bad weather, there was sleet and then there was heavy rain and it was rough enough.”

Yet for all the strain mentally the challenge took on him. Liam never doubted his ability to complete what he set out to do: “No, there weren't any serious doubts. I thought going into it, I would have backed myself mentally to get through it but my biggest fear at the start was would I get an injury that would cause me problems but it didn’t happen, that was my biggest worry going into it.”

Neither did the growing public attention affect him too badly, although Liam did admit to putting a bit of pressure on himself: “I did feel the pressure a bit but I suppose a lot of it was pressure I was putting on myself rather than other people putting pressure on me, I put a lot of work into this and a lot of people had been part of that and I really wanted to do it.

“There were times during the build-up, I was thinking of the challenge ahead of me but I’d go back to the reasons I was doing it, to raise some funds for North West STOP which obviously we have but there was never any time that I seriously doubted my commitment or why I was doing it.”

Liam’s words are backed by hard evidence as his four fastest outings of the endeavour came in his last four marathons with his fastest time of 3 hours 44 minutes coming in marathon number 12, something Liam puts down to his preparation.

“I did go faster every day, the last four days, that surprised me a little bit, how well I managed to hold up. Definitely looking back, there were a few things that played into that - the training was bang on, I worked with a guy down in Kerry, Shane Finn, who did a lot of these challenges before, he was my coach and that training was bang on.

“I did a good bit of mobility and strength work as part of the training with the physio to avoid any injuries and then I’d got into Adrian Fitzpatrick there and he was giving me rub downs and they all played into that.”

Despite all his running, Liam massively enjoyed his Christmas holidays: “I didn’t feel as if I missed out, to be honest, it felt like a normal enough Christmas - I got to have the Christmas Dinner, spend Christmas Day with family, all that kind of stuff.

“The only thing that was different was that the social life wasn’t there this Christmas but it wouldn’t have been anyway since I was taking on the challenge. I think people appreciated me taking the time but to me it wasn’t a huge sacrifice.”

It might have been classified as a solo effort but Liam sees his 12 Marathons of Christmas as a team effort from the entire community in Leitrim: “A lot of people played a part in this, shared it, joined in running, collecting money and they all played a part in it, it really was a big group effort that raised the money.

“At the start, it was very much donations from people I knew or friends of the family or I had some connection to but as time went on, it was more and more people I hadn’t a clue who they were or I didn’t recognise their names, people who might have seen it online and wanted to donate.”

The final result, you sense, is what pleases Liam most about how he spent his Christmas holidays with over €33,000 raised for North West STOP: “It went over €33,000 on Monday, the Facebook page closed because there is a 90 day limit but the Idonate page is still open.

“It is mind boggling really - it is a euro for every person in Leitrim if you wanted to put it like that, it is incredible. It was incredible when you think of the difference that money will make to North West STOP, it costs them €40 to pay a counsellor for a counselling session so €32,000 is 800 sessions so that is a huge amount of people that can help.”

If you want to donate to Liam’s 12 Marathons of Christmas, his page at www. idonate.ie/12Marathonsof Christmas is still accepting donations.