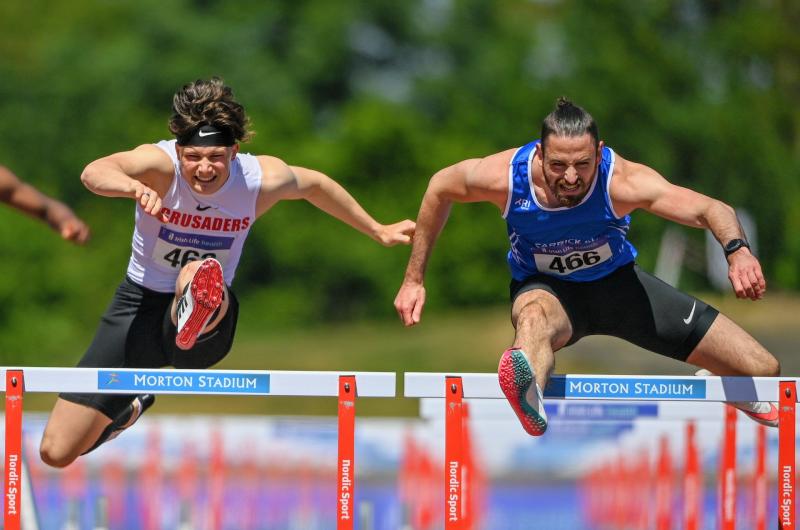 Carrick-on-Shannon AC's Gerard O'Donnell made it a famous five on Sunday when he claimed his fifth 110m Hurdles title in a row at the Irish Life Health Athletics Ireland National Senior Championships in Morton Stadium in Dublin, producing his trademark flying finish to take victory.

Up against long time rival and last year's 400m Hurdles champion Matthew Behan, O'Donnell won his sixth title overall in a time of 14.03 (wind +2.9 m/s) and had to do it in his now traditional style, coming back after Behan's blistering start and running him down over the final four barriers.

O'Donnell got away well and was well in touch with the Crusaders athlete, the pressure perhaps causing Behan to hit one of the barriers hard and almost obstruct the Leitrim's athlete. But the Carrick AC man held his nerve and more importantly his technique as he finished strongest to take the victory.

There was a bittersweet taste to the day for Gerard's training partner and Carrick AC clubmate Eanna Madden who finished fourth in the 200m final, missing out on the medals but showing a great return to form after an injury plagued 18 months. The Mohill man finished fourth in a time of 21.41 (wind +1.8m/s) after running 21.49 (wind +2.3 m/s) in his heat.

Eanna had also competed in the 400m on Friday evening but missed out making the final after finishing third in his heat in a time of 48.68. Carrick AC's Cathal McElunn ran 53.69 in his 400m heats on Friday and 23.65 in the 200m heats on Sunday.

Ballinamore AC's Colin Griffin was also in action in the 10,000m as the double Olympian covered the 6.2 mile distance in 33 mins 40.83 seconds for 13th place.

There was a further Leitrim connection to one new national champion with Kinlough's Olympic marathon runner Breege Connolly advising Sligo AC's Aoife Kilgallon who was an impressive winner of the Women's 5,000m on Saturday in a time of 16:16.85.