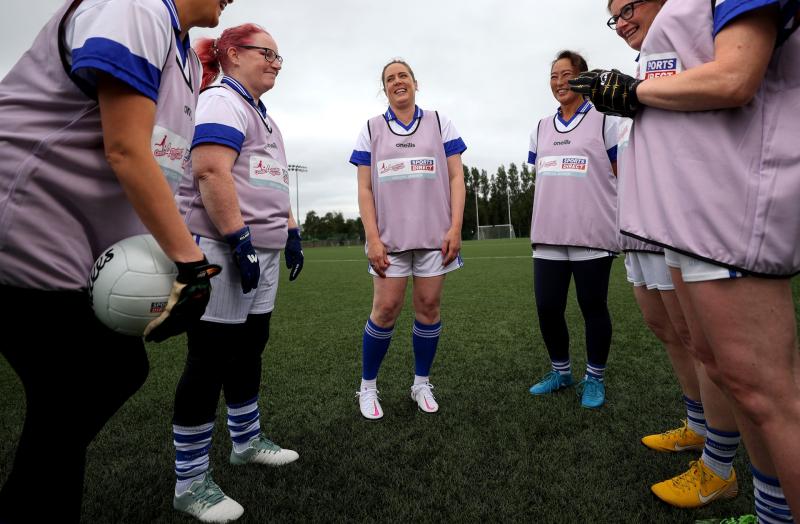 89% agreed that Gaelic4Mothers&Others had empowered them to be a sporting role model within their family. FOC from Inpho

The Gaelic4Mothers&Others initiative is an innovative way to introduce mothers and other women to Ladies Gaelic Football, in a fun, non-competitive and social environment. The initiative has proven immensely popular since its inception, with 220 clubs from all 32 counties currently involved, including six in Leitrim, with the aim to grow this further throughout 2021.

The important role that sport and physical activity plays in our lives has been highlighted even more in the past 18 months by its absence, with many women across Ireland unable to reap the mental and physical rewards associated with partaking in physical activity regularly. Sports Direct believes that now, more than ever, is the time to encourage and celebrate female participation in sport, not just for the sport itself, but for the other benefits it brings.

A survey carried out by Sports Direct and the Ladies Gaelic Football Association with over 1,200 Gaelic4Mothers&Others participants ahead of the launch underlined this importance even further, as it found that 90% of respondents felt that the initiative had improved their mental health, while 89% agreed that Gaelic4Mothers&Others had empowered them to be a sporting role model within their family.

Speaking at today’s announcement, Ciara Murray, Group Marketing Manager at Sports Direct said: “At Sports Direct, we firmly believe in the inclusivity of sport. Our involvement in Gaelic Games at a grassroots and inter-county level has shown first-hand just what sport can do for a person, a family or a community. Gaelic Games is not just for the elite, and what makes it so special is the participation of so many people across the country. At an important time for women’s sport in Ireland, we are especially proud to partner with the Ladies Gaelic Football Association and show our support for a brilliant initiative which allows mothers and other women in every single county across Ireland to play Gaelic Football in a welcoming, playful environment. While Gaelic Games provides many sporting role models for children across the country, programmes such as Gaelic4Mothers&Others ensure that there are plenty closer to home.”

As part of the new partnership, over the coming months, Sports Direct will show women everywhere that while visibility and role modelling may start at home, with Gaelic 4 Mothers and Others and Sports Direct, role modelling has never been so fun. Sports Direct will release a new video series ‘#MyReasonWhy’ to showcase ambassadors across the four provinces of Ireland who will share their reason why – why they’re involved in Gaelic 4 Mothers & Others, and why it means so much to them.

For more information on the Gaelic4Mothers&Others programme, please visit:
https://ladiesgaelic.ie/lgfa-hub/gamesdevelopment/gaelic4mothersothers/