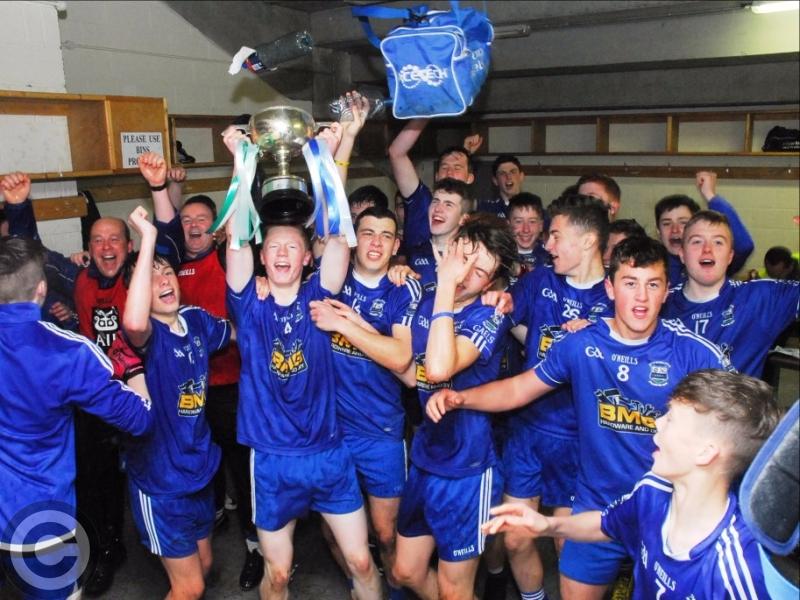 Delighted Melvin Gaels players celebrate in the dressing rooms after their Minor A Final victory. Photo by Willie Donnellan

Led by captain and man of the match Darragh Rooney, Melvin Gaels created history when the famed Kinlough club won their first ever Minor A Championship title after a titanic encounter with St. Manchan’s on Saturday.

After the thrilling draw between the sides in the first game, expectations were high for Sunday’s replay but the game met and surpassed them as Melvin Gaels and St. Manchan’s fought out a tremendous contest, full of top class action.

The Kinlough men surged into an early lead with a thunderbolt goal from Cillian McGloin the highlight of a blistering opening ten minutes but St. Manchan’s fought back and when Ethan Harkin goal after 19 minutes, a six point gap was back to two points.

Melvin Gaels led by four points at the break but St. Manchan’s kept clawing back the gap only for Melvin Gaels to surge clear. But they could do nothing when Fiachra McGuinness drilled home from close range.

Melvin Gaels’ response was the stuff of champions as they literally went straight down the field, won a penalty which Darragh Rooney dispatched with lethal coolness.

It was tit for tat from there until the finish but no matter how much St. Manchan’s put them under pressure, Melvin Gaels were able to respond and claim a historic title for the Kinlough club.

For an in-depth report and reaction, see next week’s Leitrim Observer.