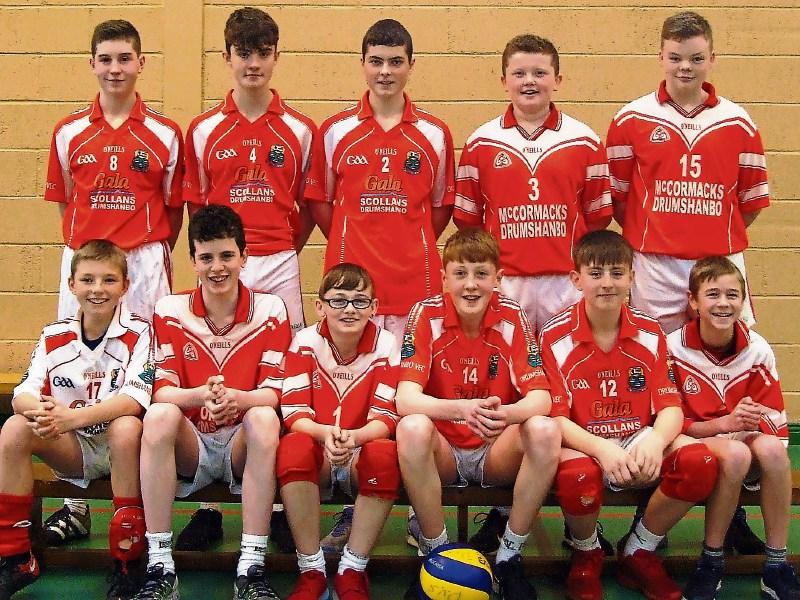 Drumshanbo Junior As scored a very notable win last week when they travelled to Loughrea and beat holders and Junior specialists Loughrea in the All Ireland Junior A quarter -final.

Drumshanbo showed another side of themselves when they came from one set down.

The Junior Bs also reached the semi-final, continuing their Lazarus run, by beating Colaiste íde Tallaght. But their dream run ended with a loss to St. Flannan’s Ennis in the semi-final.

For the first time this decade, Brigid's ended the season in only one A final as Drumshanbo ended their double dreams. Unlike most of their matches, Drumshanbo left their best wine till last as they totally overpowered Brigid's in the final set.

It will stand to them again, but their loss in the first set was almost certainly due to their mistakes. They outplayed St. Brigid's for most of the first set but missed spikes and an incredulous eight serves – gifts you don’t give to the top Junior school! Possibly it was nerves, playing in the lion’s den.

The first set was very tight. Level at 3, Brigid's edged ahead 11-7 as Drumshanbo missed five of their first seven serves! But Drumshanbo then took out the Brigid’s serve five times in a row to edge close at 14-15. But Loughrea were error free and broke to 19-15, a lead they never surrendered.

Faced with their first set loss of the season, Drumshanbo responded as Evan Foley hit three aces in a run of 7 serves. At 6-1 there was a magnificent rally of 43 touches that maybe turned the game. All the team fought hard with spectacular dives from Brendan Gunning to raced to a 19-11 lead.

Back fought Loughrea and suddenly the lead was only 23-21. But with Ronan Moran seamlessly slipping on as setter, Dylan Easterbrook, whose error free play typified Drumshanbo, finally blocked the winner to take the set.

Many a time Drumshanbo have won a middle set against Brigid's and been wiped out in the third. Shawn Meehan had not read the script. Again his size again belied his bullet-like serves and he blitzed Drumshanbo into a 7-0 lead.

Barry McWeeney now came into his own. Hitting six serves, he now got to tower up at the net and smashed down numerous winners and Brigid's faded into history - for this year at least!

This was a very strange match. For the first set it was gripping and very competitive. Tallaght stunned to a 5-0 lead. Drumshanbo, thanks to consistent serving from Carlos González De Luna, won the next seven to lead 7-5 and kept ahead until 12-12. Then, with captain Daniel Curran flicking down a winner and Danny McWeeney sweeping up the gaps, Pablo Martúnez Megina served them 17-12 ahead.

Tallaght immediately broke back to 17-17. With Gary Corcoran playing strong at the net, Drumshanbo edged to 20-17. Still it was close at 21-23 before Drumshanbo squeezed out.

Shane Wynne helped them get a 5-3 in the second set. Jason Beirne hit 11 serves in a row to assure things for the Leitrim school. Adam Houat came on at 20-11 and Mark Reynolds served out the game to confirm Drumshanbo as semi-finalists.

Here the fairy tale come-back run ended. Drumshanbo looked stunned by the sheer size of their tall opponents and froze to fall 1-11 down at the start. Strangely they outplayed their Clare opponents for the rest of the set with De Luna hitting down and Megina hitting five serves. Jake Tobin played well throughout the match and was Drumshanbo’s most consistent player.

The second set will not be remembered for long as Drumshanbo never got going despite the best efforts of Rory O’Donnell late on.

One notable achievement on the day was the fact that five servers had 100% success. It was also marked the first year of student exchange for Drumshanbo with the two Spanish students Megina and De Luna integrating perfectly during the run to the semis.