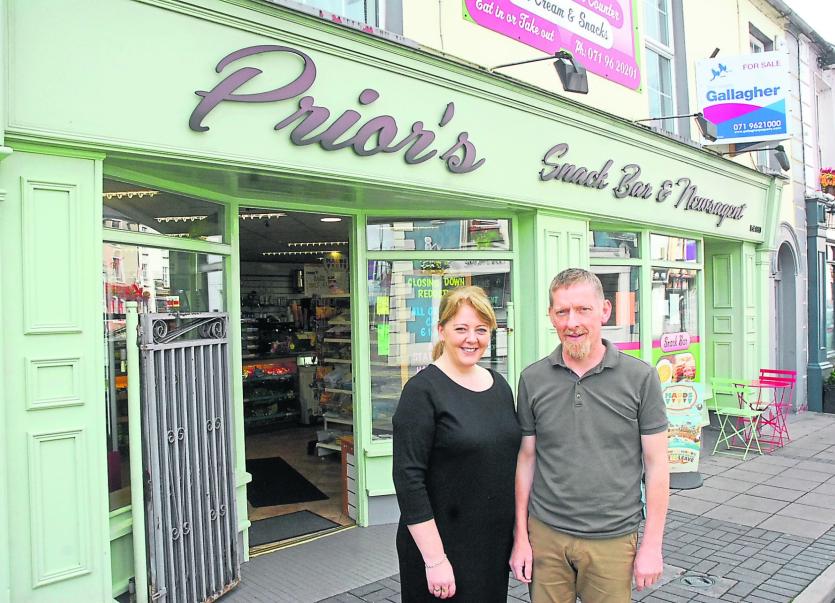 Colm Prior and his partner, Bernadette Keenan, pictured outside Prior's Snack Bar and Newsagent.

Friday, August 31, will mark a bittersweet day for Colm Prior and his partner, Bernadette Keenan, when they close the doors on one of Carrick-on-Shannon’s longest serving businesses.
The iconic Prior’s Snack Bar and Newsagents has served the people of Carrick-on-Shannon for 65 years but Colm and Bernadette have now made the difficult decision to close for good on August 31.
Prior’s is one of the longest serving businesses in the town centre. Colm’s father, Denis, bought the business in 1953 from M.A. Farrell - at that point the business had been operating as a newsagents for at least 35 years - meaning the property has served the community for more than 100 years.
Denis, a native of Ballymagovern, Co Cavan - where he grew up in the family’s pub and grocery business - spent a number of years in New York working in pubs before moving to Carrick-on-Shannon in the late 1940s to work in his uncle-in-law’s pub, located where the present day Swan bar is housed.
When M.A. Farrell’s came up for sale in 1953, Denis, then aged 35, bought it for the substantial sum of £1,850.
He took over the business in September that year and shortly afterwards opened a restaurant at the rear of the premises. 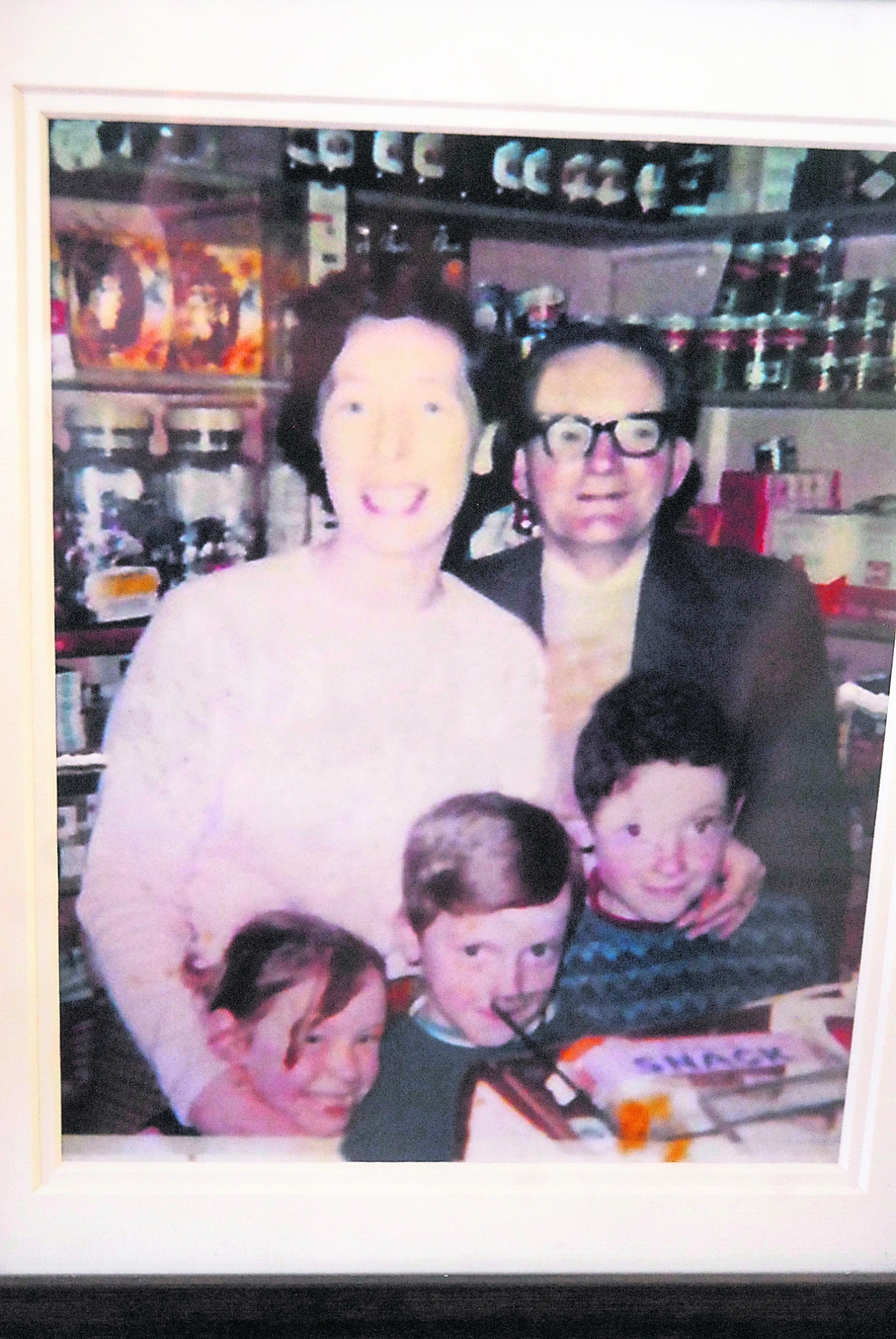 Pictured above is the Prior family in the late 1960s.

In 1958 Denis married Derry native, Rose Conway, who moved from Belfast to Carrick-on-Shannon to help run the business.
They had three children, Joseph, Colm and Valerie who were all brought up above the shop and restaurant.
“The shop was always a part of our lives. We didn’t know any different growing up but there were so many families on the Main Street and down Bridge Street and there were a lot of children who grew up around the town, so it didn't seem strange to grow up like that,” says Colm.
The restaurant closed in 1974 but the newsagency and shop continued
Sadly Denis passed away in 1989 and Colm moved back from Dublin to take over the business.
“At the time I was working for the health service in
Dublin. It was a good job and I loved living in Dublin,” recalls Colm.
“It was a huge change to come back to Carrick-on-Shannon and take over but it is something that I felt I had to do.”

In December 1992 Colm undertook the first major renovation of the property, removing the small shop front and extending it. He extended the property further inside in 2005 and expanded the business to incorporate a snack bar and seating area.
At its peak the business employed four people but in the last 8 years, Colm and Bernadette say business has slowed, especially in the upper Main Street area of the town.

Carrick is a town of two halves

“I am not afraid to say it, since 1990 I believe that Carrick-on-Shannon has become a town of two halves, all the business and investment is centred around Bridge Street and there is really nothing for the upper Main Street area,” says Colm.
He said the rates revaluation process carried out in the county has also had an impact for businesses with some seeing rates increasing regardless of the actual income of the business.
“Of course rates alone isn't the only factor. There is very little footfall this end of town and when the traffic flow was recently changed, stopping vehicles coming from the Leitrim Road from turning right onto Main Street, that had a huge impact on our business. We noticed that straight away.
“That sort of change was brought in with no consultation by the Council and it has had a huge impact. That is hard to understand,” he admits.
His partner, Bernadette, says that the price of parking in the town centre is also an issue.
“People can park out at Tesco for nothing and if they want to shop in the town centre, they have to pay. It's like people are being taxed for supporting local businesses and that isn't fair,” she points out.
Colm acknowledges the challenges facing Carrick-on-Shannon's town centre aren't unique.
“I know other towns are experiencing similar problems but the fact is that something needs to be done if we are going to encourage families to move back into the centre of our towns, if we are going to encourage businesses to invest in our towns,” he said.
“The Government needs to do more to support indigenous businesses. They employ around 300,000 people nationally. Multinationals only employ around 280,000 and yet the Government bends over backwards to encourage them, to offer incentives and to support them, why not invest in our own local businesses instead?” he asks
“Leitrim County Council and Carrick-on-Shannon Chamber has to do more for the town centre and not just focus on Bridge Street, but also upper Main Street. Only for businessmen like Gerry Murtagh, there wouldn't be any huge investment in this area of the town and that is sad,” he adds.
Bernadette agrees that the situation facing many small businesses is grim.
“The costs just keep going up and the margins just keep getting smaller. We are taking hit after hit and businesses can't keep going in those sort of circumstances,” she says.
“That's why we've decided to close. It is very difficult. My family has been here for 65 years. I have invested so much of my life in this business and it will be heartbreaking to close the doors on the shop for the last time on August 31,” admits Colm.
“Here I am now, at 54, and despite running a business for so long, I now have to go out, to start again and look for work. That is very tough.”

Thank you to our loyal customers

But along with the sadness of the closure, Colm and Bernadette say they are walking away with a lifetime of happy memories.
“There are so many customers, so many characters that have been in and out of the shop over the years,” admits Colm.
“People like Vincent 'The Buff' Doherty - who was a wonderful friend, a great character. They were the people who made it worthwhile. We had so many customers down through the years who aren't just customers, they are friends and they have been a wonderful support to us.
“That's what we'll miss most. They have left us with a lifetime of happy memories,” he says.