NCBI Clear Our Paths: Am I Getting Through? 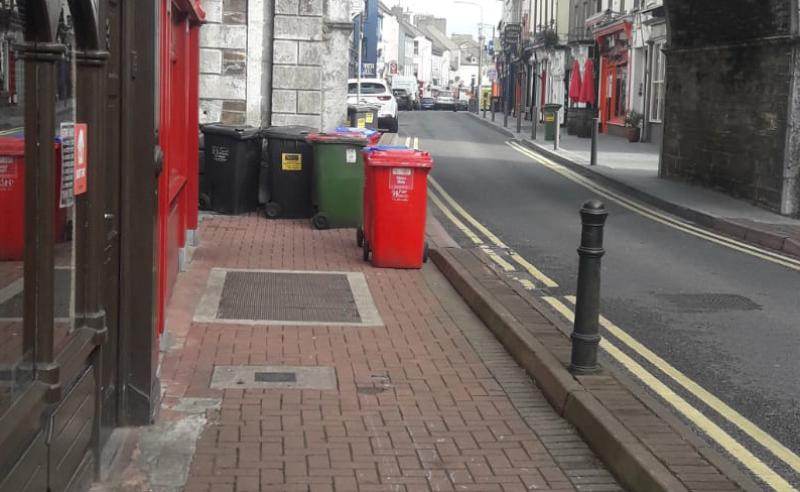 Blocking footpaths causes significant difficulties for those with vision impairment.

As part of NCBI's Clear Our Paths campaign, NCBI service user and advocate Tabitha Kenlon wrote a piece in which she detailed her own experiences of dealing with potentially dangerous obstacles and dog fouling on our footpaths. We would be grateful Tabitha's piece could be considered as a feature piece to support her work and the work of those involved in the campaign.

In nursery school I was taught a song about going on a bear hunt. Finding the bear was not really the point; rather, the song instructed the wee choristers about the way prepositions govern our movements. On our imaginary trek, we encountered a number of obstacles, such as a large hollow log. Then we had to stop and evaluate. Can’t go around it, we chanted. Can’t go over it, can’t go under it. We’ll have to go through it! And so we crawled through an invisible wooden tunnel and continued until the next impediment. I think of this song when my cane bumps against something as I walk around town. I might be able to rely on my remaining vision to figure out how to manoeuvre around this unexpected object, but it’s safer to use my cane to assess whether I can go over, through, around to the left, or around to the right.
Yesterday a friend’s eight-year-old son confessed that he didn’t think he could handle vision loss as well as I was. I told him what I tell everyone who says this sort of thing to me: that some days are harder than others, and that he could deal with it if he had to, because he would learn how. His trepidation is a common sentiment among both children and adults – it is difficult to imagine, in a literal way, what someone else sees, and that uncertainty can be frightening. My dad has suggested that since I’m good at a lot of things (thanks, Dad!), I should also get good at being vision impaired. The phrasing might seem odd, but he makes a strong point. Managing a disability is a skill to be learned, practiced, maintained, and improved. When I arrived in Dublin last year to study, I got training from the NCBI on how to use a cane – how to hold it, how to match my walking pace and the rhythm of the swing of the cane, how to interpret the sounds and tremors communicated by the cane to my ears and body.
Doing this requires a great deal of concentration. I can no longer just stroll around and let my mind wander. For a lot of people, seeing with their eyes can be passive, something done automatically and without conscious thought. When you approach a flight of stairs, chances are you don’t think, ‘Here are stairs. I will go up them now.’ Using a cane, though, I have to tune in to what it’s telling me, and if it encounters a barrier, I might have to stop and figure out what it is, whether it’s stairs going up or a decorative planter. Every step I take is a potential surprise.
Indeed, most of us take our world for granted. We don’t notice how many steps we go up and down in a day until we’re dragging a heavy suitcase, pushing a baby buggy, or using crutches or a wheelchair. We avoid low-hanging tree limbs or sandwich boards with hardly a thought, unless for some reason we don’t see them – whether we’re blind, vision impaired, or staring at our phones – and then we get a mouthful of leaves or a bruised shin. The nondisabled person can often easily make adjustments, looking around for an easier route, or putting away the distracting phone.
But people with disabilities have fewer options. Our paths are frequently strewn with obstacles, and I sometimes feel like I’m in a video game as I dodge protruding bicycles, untidy cafe furniture, and illegally parked cars. A friend once recommended I avoid what he called a ‘minefield’ of dog poo near my apartment building by either taking a different (and longer and less familiar) way home from the bus stop, or by walking in the street. Fortunately I only had to do this a couple times before a good rain took care of the problem, at least temporarily.
People with disabilities are often at the mercy of other people’s willingness to think about the physical world and the way we all move through it. If rubbish bins are haphazardly blocking the path, is there enough space for a wheelchair to pass by? Can a person using a long cane navigate without venturing into the street or feeling like a pinball? Just a few extra seconds arranging the bins to allow passers-by a safe corridor could make all the difference.
I’ve been using some playful metaphors here – the bear hunt nursery rhyme, video games, and pinball machines. But asking for clear paths is a serious request. It’s not just inconvenient to have to stop and spend extra time figuring out how to get around an obstacle; it’s a matter of safety. Walking in the road to avoid a parked delivery van is dangerous for everyone, but especially for people who are blind or vision impaired. Getting smacked in the face by an untrimmed tree branch could cause injury. And sweeping one’s cane through and then stepping in dog poo – well, no one wants that.
So, the next time you’re out in the world, pay attention to what’s in your way, and perhaps move it, clearing the path for the next person. Line up your bins with a bit more care, don’t leave your vehicle blocking the path, clean up after your dog, push the chair under the table when you leave an outdoor seating area, and keep your trees and shrubs well-groomed. But if you do leave your car in my way, at least don’t lock the doors – if I can’t easily go over or around it, I might very well go through it!

Tabitha Kenlon is an Advocate with the NCBI and is supporting the #ClearOurPaths campaign find out more about the campaign on the NCBI Website.