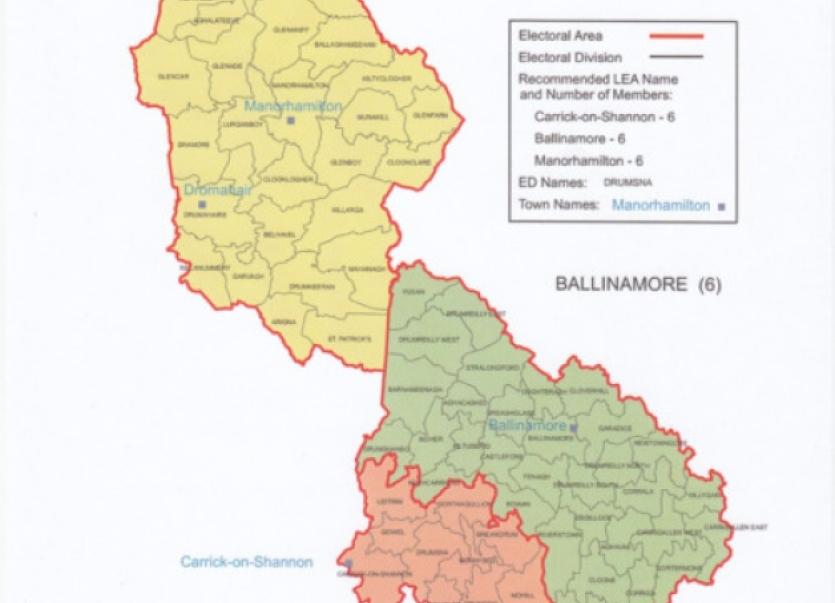 The recommendations of the Boundary Committee report is set to drastically change the Constituency divide for the upcoming local elections in 2014.

The recommendations of the Boundary Committee report is set to drastically change the Constituency divide for the upcoming local elections in 2014.

The recommendations, published last Thursday afternoon, called for the reorganisation of local electoral areas into three distinct divisions: Manorhamilton, Ballinamore and Carrick-on-Shannon. The former Dromahair Electoral Area will now be subsumed into the three remaining areas.

The changes have resulted in the creation of three six seater areas leaving the door open for the election of 18 county councillors next May, four less than currently elected.

While the decision to roll part of the Dromahair electorate into a six seat larger Manorhamilton Area, came as no surprise, the subsequent decision to annex Leitrim Village, incorporating it into the Carrick Area has caused some upset for local representatives.

Likewise the decision to roll Drumshanbo and surrounding areas into Ballinamore, to create a six seater, has also raised some eyebrows.

The Association of Municipal Authoriites of Ireland (AMAI) have already criticised the Boundary Commission report claiming it could result in significant towns and rural areas with no local government representation.

The AMAI has called on the Government to commit to strengthening local democracy by enacting meaningful reforms, not additional local cuts which further centralise power away from local communities.

President of the AMAI, Naas Town Councillor Willie Callaghan, stated: “No one is arguing that reforms are not necessary but it cannot be reform just for Government to say they have ticked a box. Local government works best when decisions are taken at the lowest levels, by those who live, work and understand best the needs of their communities”