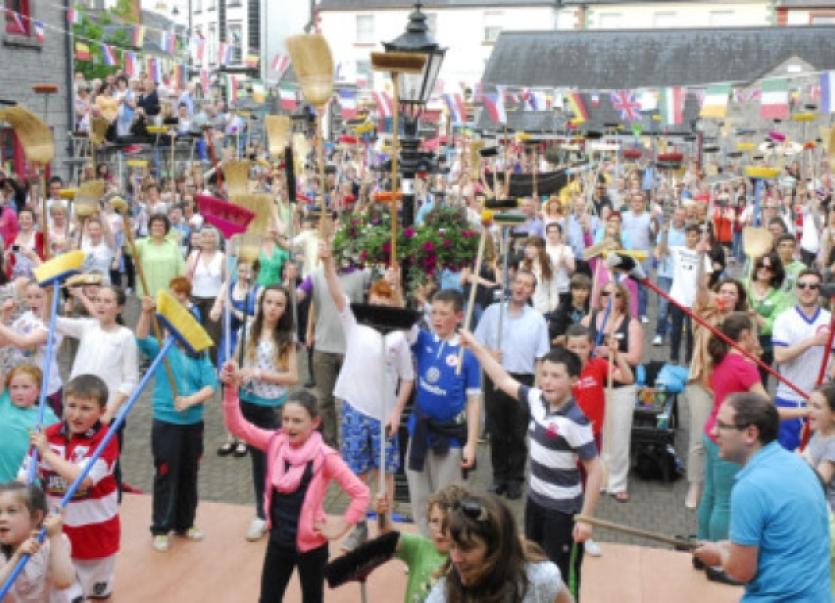 The county town scooped it’s second world record this year after last month taking the title for ‘Rock the Boat.’ Just like the Carrick Carnival, the Hup and Connacht Fleadh could thank the glorious sunshine for helping to attracts visitors from near and far to the town’s celebrations.

Carrick-on-Shannon had put in an early bid to host the Connacht Fleadh this year, during their 400th anniversary celebrations.

From midnight last Thursday, colourful music notes appeared all over the town, on footpaths and on windows showing the way to the various sessions that popped up everywhere at the weekend.

Edwina Guckian told the Leitrim Observer, “We had no idea we could break the brush dancing world record, which was set at 650 from the All Ireland Fleadh in Cavan two years ago.”

She said word of mouth, music and dancing classes and publications helped draw the crowds. The entry fee was just €1 (“but many people gave much more”) with all proceeds going to St. Patrick’s Hospital Patient Comfort Fund, Carrick-on-Shannon.

There was no previous dancing skills necessary, as Edwina lead the way accompanies by the Connacht Champions Moylurg Band, all you needed was a brush!

The Hup Festival and the Connacht Fleadh were two both a huge success over the past week. The town was alive to music, song and dance and the lively atmosphere flowed from every pub, shop and centre.

PRO of the Hup Festival, Edwina Guckian said there are talks that the Hup may become an annual event, such was it’s success. She said after the committee take a break, they will discuss the prospect further.

There were a number of Connacht Fleadh winners from the county and a huge congratulations and best wishes is extended to them.

The winners will go on to compete at the All Ireland Fleadh in Derry from August 11 -18.