The memory of James Gill will live on 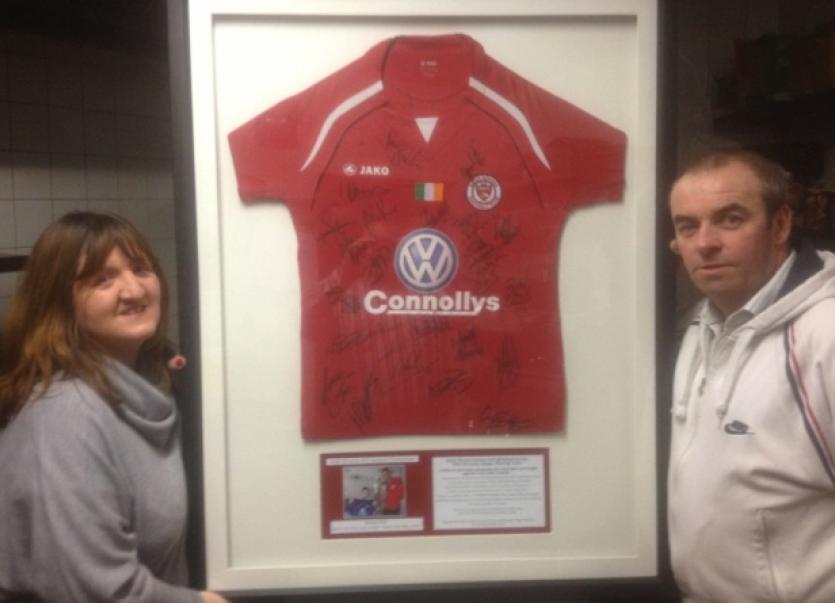 Declan and Geraldine Gill parents of James would like to thank Sligo Rovers, the community of Drumsna and Noel Duignan from Drumsna for making their son dream come true way back in April 2013.

Declan and Geraldine Gill parents of James would like to thank Sligo Rovers, the community of Drumsna and Noel Duignan from Drumsna for making their son dream come true way back in April 2013.

James Gill whose father Declan hails from Drumsna lost his battle with a rare liver cancer on May 18, 2013. Tuesday, February 4 this year he would have celebrated his 21st birthday.

The Gill family had been fundraising in 2013 in the hope of sending James to America for cancer treatment.

According to the Gills, Noel Duignan was at one of the Sligo matches in April last year when he remembered James the sick grandson of PJ and Mary Gill.

He knew James loved sports and that he missed the big game between Sligo Rovers and Shamrock Rovers because he was so ill in hospital at the time.

Noel got talking to the Sligo Rovers mangers and told the story about James in Tallaght Hospital and how they were fundraising for life saving treatment for his cancer. Noel said they would be delighted if some of the team would pay him a visit and to show him the Airtricity League Trophy they won.

Declan Gill said, “True to their word on 19th April 2013 a month before James passed away Seamus Conneely and Paul Hynes came to see James in his Hospital bed in Tallaght Hospital to cheer him up. A big thank you to you both for taking time out to visit James, he was so delighted to be able to hold the cup and not only did you let him hold the cup you also gave James a signed jersey to remind him of his time he had with the boys from Sligo Rovers.”

On the night of James months mind, Noel Duignan wanted to do something special to let people know about James and how brave he was and how he never let his sickness get him down, “so he told us about his idea about framing the Sligo Rovers shirt and putting it up in his pub in memory of James Gill so everyone can keep him in their thoughts and prayers. We both thought it was a lovely thought and gave Noel our blessing.”

“On 3rd January 2014 we went down to view it and myself and Geraldine were blown away when we saw how big the frame was and how well it looked. It was so hard to see your son in a frame with a signed shirt and know in your heart how proud he was that day when they handed him the shirt and wished him well on his travels and hoped he would get well soon. This framed photo would not be hanging today in Duignan’s bar in Drumsna if it wasn’t for the many people who helped get it there,” Declan Gill told the paper.

Under the jersey a piece reads “In memory of a brave young man who never gave up his fight against a rare form of liver cancer.”

On April 5, 2013 Declan and Geraldine presented a lovely trophy to everyone in the Drumsna area on behalf of James. The trophy “is a thank you to everyone who was so kind to him and for all the prayers he received.”