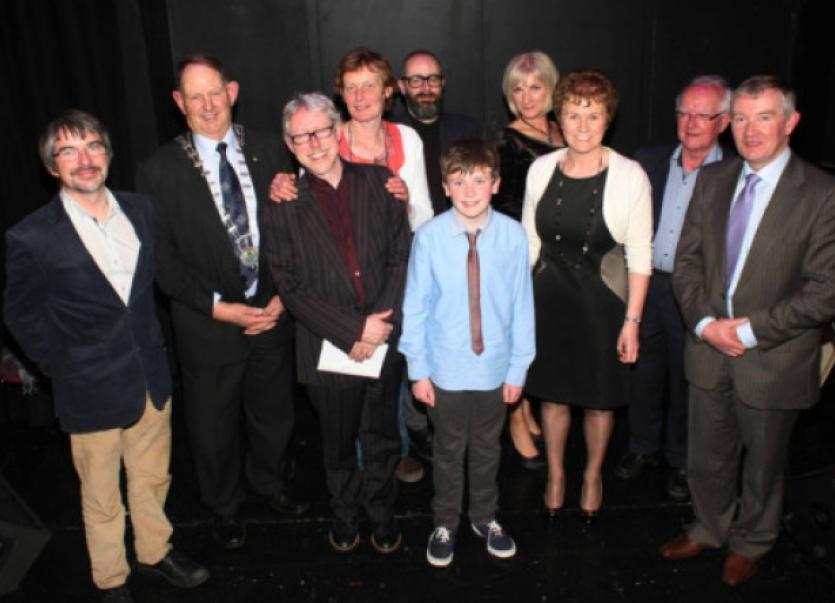 The 2013 Leitrim Arts Awards took place last Friday evening last at a gala event in The Dock, Carrick on Shannon. The awards acknowledge outstanding contribution to and achievement in the arts in Leitrim.

The 2013 Leitrim Arts Awards took place last Friday evening last at a gala event in The Dock, Carrick on Shannon. The awards acknowledge outstanding contribution to and achievement in the arts in Leitrim.

Leitrim County Manager, Jackie Maguire, noted that a “thriving arts scene exists [in Leitrim] because of the hard work, endless talent, and sheer determination of a great number of individuals who work tirelessly at their profession. These are the people who make the exhibitions, the films, the plays and concerts that we go to see. They design the houses we live in. They organise the workshops that our children attend.”

Renowned for her unique interpretation of Irish and Roots songs, Eleanor Shanley is one of Ireland’s foremost singers. Her list of music credits is endless and she has collaborated with Ronnie Drew, Dolores Keane, Sharon Shannon, Eddi Reader and Desi O’ Halloran among others.

At age 10, David Rawle joined Leitrim Youth Theatre Company, through which he had the opportunity to audition for ‘Moone Boy’ and was thrilled to be offered the part of Martin Moone. He has enjoyed every minute of filming and has met some amazing people, including Chris O’ Dowd who has been extremely generous to David, despite slagging him about Leitrim!

Jackie McKenna, is recognised throughout Ireland as a sculptor and is known for her many public commissions in bronze, stone or wood. However, for many years she has also been to the forefront of arts development in Manorhamilton and in particular has played a vital role in establishing the Leitrim Sculpture Centre as a facility of national importance where artists can make work.

Dominic Stevens has pioneered how we think about architecture and the buildings we live in. He has won numerous awards for his architectural work and his publications on design and sustainable living, particularly in a rural context, have been groundbreaking and recognised internationally.

Angus Dunne has been the driving force behind the Breffni Players for over 50 years. A talented director, he has contributed greatly to the group, encouraging members in all roles, the results of which were abundantly apparent this year when they won the All-Ireland One Act Drama Finals in Ballyduff, Co. Waterford.

Introduced by Vincent Woods, the evening also played host to readings by author Brian Leyden who was joined by Jo Holmwood, author of the new book Under the one roof, which she wrote during her Spark residency at The Bush Hotel. Leitrim’s most recently recorded artist Mick Blake was joined by singer Gavin Sweeney and the latter part of the evening was given over to the incomparable Eleanor Shanley who was joined by John McCartin, Padraig McGovern and Sabina McGovern.

The event is a platform to celebrate what Leitrim artists have achieved on a local, national and international level. Leitrim County Council initiated the awards to acknowledge the individuals that have given rise to the vibrancy of the arts in the county and to acknowledge the importance of the arts to County Leitrim. Jackie Maguire concluded by saying that the awards afforded Leitrim County Council “the opportunity to publically thank some of those individuals, and recognise the importance of their contribution to the arts, and to society.”