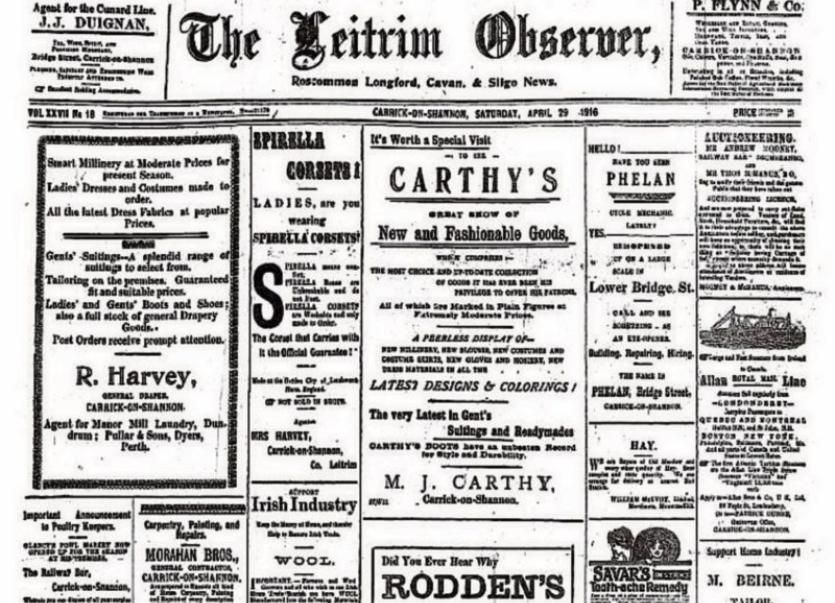 Here are some of the stories which made the news in the Leitrim Observer in times gone by.

Sage words of advice on finding a husband

Much has been written at various times in the way of giving advice to women on the choice of husbands, but the method adopted by one lady is certainly original. "Never decide," she said, "until you have met the father of the man who seeks your hand in marriage. If the father is an old fogey you may be sure that the tendency to bore people which you may have noticed in the son, will develop later into all the features of unredeemed fogeyism. If the father be indolent and irresponsible, be careful to note if the son shows any signs of the same trait, however slight, and, if so, be warned in time!"

Apparently there's nothing worse than a thieving cow

In a trespass case heard before Dowra District Court between two neighbours, the Plaintiff was not only upset at the quality of the fencing between his property and his neighbour, but also about his neighbour's livestock, who apparently were opportunistic thieves:

Plaintiff- "The defendant is under the delusion that I am responsible for the fence, but the portion of the fence I am complaining of is his. This is not the case altogether of a fence, but the defendant has a thieving cow and some goats and they are destroying my crops."

"Unless more male singers joining the Carrick-on-Shannon Musical Society the group may be forced to cancel 'Maritza', the comic operetta which they propose staging in the near future. This group, who have been in existence for a long number of years, in the past have delighted huge audiences with their renderings of some of the better known comic operaettas. What a pity it would be to see the Soicety going out of existence because of the shortage of male singers."

New election candidates criticised for their "enthusiasm and ignorance"

A long standing member of Leitrim County Council criticised new candidates in the 1991 Local Authority elections for being unrealistic in their claims about what they could achieve in office. The comments came in a discussion on allocations within the various districts for pothole repairs.

"Cllr Farrell McElgunn commented: "some candidates that have not gone up for election before are being carried away in their enthusiasm and their ignorance. The fact that money has to be voted at the beginning of the year (in the Budget) prohibits us from promising the sun, the moon and the stars, but reality."