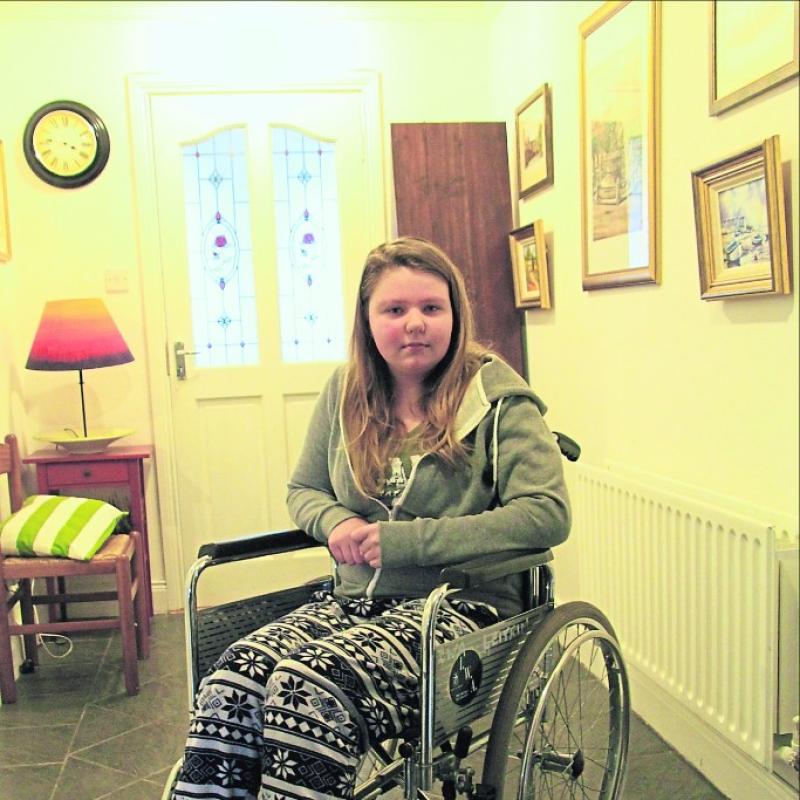 A Leitrim teenager who has been suffering chronic ill health for the past three years has been told she must go abroad for treatment.

Rebecca Hollidge and her family blame the severe medical issues Rebecca has been suffering on the HPV vaccination she received three years ago.
Rebecca suffered chronic pain, muscle weakness and short term memory loss as well as severe exhaustion that meant she slept almost 20 hours each day and had to use a wheelchair to get around.

Parents Yvonne and Peter Hollidge told the paper this week that their daughter who is almost 17-years-old is now receiving treatment abroad. They said “we were told there was no one here who could make her better.”

The Hollidges said they have the support of Rebecca’s specialists in Ireland who told them they could do no more for Rebecca.
The Annaduff girl has spent 3 weeks in a residential clinic abroad and is receiving treatment at home with frequent assessments at the clinic. Rebecca is being treated by doctors who the family say have “experience with her symptoms.” The family have noticed “some improvements” and are hopeful they are on the right road. They said the doctors in the clinic are “convinced of a link with the HPV vaccination.”

Rebecca’s improvement is slow, and while she still has some very bad days her parents say she is using the wheelchair less and less and is also not sleeping as much. “We are happy there are promising signs” with the treatment abroad said Yvonne, but they also understand there is “no guarantee” she will fully recover.

Rebecca is one of the first girls from REGRET (Reactions and Effects of Gardasil Resulting in Extreme Trauma) support group to undergo treatment abroad, others are now following in Rebecca’s footsteps as they seek out help. Yvonne told the paper families feel very lost as they are left alone to deal with some of these symptoms.

The Hollidge family said they have been “humbled” by the generosity of local people to the fundraising for Rebecca’s medical fund. Without the money they would not be able to seek this treatment abroad.
Following recent fundraising events held in Aid of The Rebecca Hollidge Medical Fund the family would like to thank all committee and support members Des Guckian, Collette McGown, Annette McWeeney, Tricia Notley, Fiona O'Driscoil, Frank Cadam and Hazel Tuthill.

For the recent auction, special thanks goes to The Bush Hotel for the venue, Sean Mahon on music, auctioneers, all sponsors for their generous donations, private donations, Stripe Marketing for design and printing, advertisers of the event, the raffle monkeys and all those that volunteered on the night.
For their amazing production of ‘Moll’ in The Hunt Hall, and their donation to Rebecca’s fund, the family would also like to thank the Sliabh an Iarainn Players.

For the church gate collection, a huge thank you goes to everyone who organised and helped out with the church gate collections over the past two months, the priests across South Leitrim and to Rev Linda Frost.
“The most important thanks go to all the people who generously gave their hard-earned money to support Rebecca’s medical treatment. The good will of the people around us has meant a lot and has already made a positive difference to Rebecca’s life,” they stated.

In Ireland, all the recommended childhood vaccines given in the schools immunisation programme are free, HPV is part of that programme.

HPV Vaccination Informaction from the HSE

The programme aims to vaccinate on an annual basis all 12 to 13 year old girls with HPV by targeting girls in first year in second level schools and age equivalent (for 2016/2017 academic year girls born between 01/09/2004 and 31/08/2005) in special schools and home schooled students.

According to the HSE, “Since HPV vaccine was licensed in 2006 research has been conducted all over the world that demonstrates that the vaccine is safe and prevents cancer.
“The evidence has been steadily growing since 2006 and now a large bank of research exists which proves the safety and effectiveness of this vaccine. Studies have been conducted worldwide which confirm that HPV vaccination is the right way to protect girls from cervical cancer.”

The vaccine is recommended by the World Health Organization, International Federation of Obstetricians and Gynaecologists and National Immunisation Advisory Committee.
According to the HSE each year in Ireland, over 6,500 women need hospital treatment for pre cancer of the cervix, 300 women get cervical cancer, and 90 women die from it. Cervical Cancer is caused by HPV. It says the HPV vaccine protects against 7 out of 10 cervical cancers.

The HSE says the vaccine can cause some short term side effects. These may include pain, redness or swelling in the arm where the vaccine was given; as well as headaches, dizziness, nausea; and/or a mild fever. These can be treated with paracetamol or ibuprofen.
The HSE state on their website “Occasionally girls faint after getting an injection. The girls will be advised to sit down for 15 minutes after the vaccination. This helps prevent fainting. Rarer side effects include wheezing (bronchospasm) or an itchy rash or hives. Like most vaccines, severe allergic reactions are extremely rare. If you are worried about any of these talk to your doctor or a member of the school team.”
In January 2017 all 69 US National Cancer Institute NCI-designated Cancer Centers Endorsed HPV Vaccination.