Wishes of the people are being "consistently ignored" 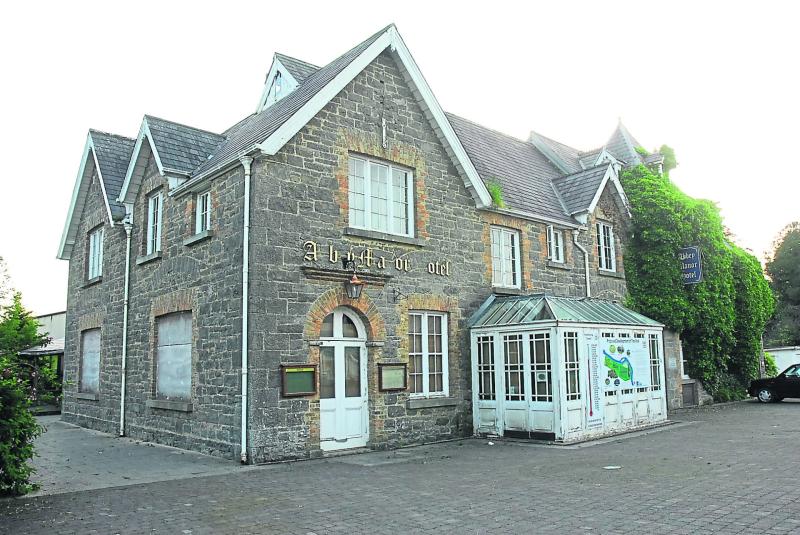 A north Leitrim councillor has called out the owners of the now derelict Abbey Manor Hotel, saying “if they have any bit of moral decency, of moral courage, and any bit of respect for the people of Dromahair,” they will address the ongoing decay impacting the listed structure.

At the June Manorhamilton Municipal District Meeting, Cllr Mary Bohan said she was “fed up” putting down motions calling for the Abbey Manor Hotel site to be properly secured and essential works to be completed by the owners.

She said the owners had “consistently ignored the wishes of the people of Dromahair and Leitrim County Council.”

It is nearly 12 months since Leitrim County Council served a Section 59 confirmation notice (endangerment of a Protected Structure) on the two surviving part owners of the Abbey Manor Hotel, Dromahair.

No appeal was lodged by the owners and it came into effect on July 12, 2016. The completed works were required to be finished within 16 weeks but no works ever commenced.

Last November, the present owners notified the Council that they were at “an advanced stage” of transferring the hotel to new owners. Leitrim County Council subsequently held talks with two prospective purchasers of the hotel earlier this year.

A spokesperson for the local authority confirmed “to date it would not appear that the hotel has been sold/disposed of.”

Cllr Bohan said that the whole situation was “unbelieveable.”

“The notice was served and then no works were done in the 16 weeks and then we were told that the hotel is being transferred to new owners, well that hasn’t been done either,” she pointed out.

“I don’t know what kind of laws we have but somebody must be held accountable.

“This is an eyesore and it is dangerous as well. It is very unfair to the people of Dromahair and the wider community, to see such a structure, a listed building, left to fall apart,” she continued.

“They (the owners) came in and got the support of the community for their work on the hotel and now they are gone and what’s left behind is an appalling eyesore. The owners need to face up to their responsibilities.

“Something has to be done. It is not fair for people to come in, build and then close up and walk away and leave a derelict building behind them in the centre of a community.

“I would ask the Council to pursue with all vigour every possible opportunity to see what can be done legally to bring legal action against the owners and ensure they carry out the works.”

Cathaoirleach, Cllr Frank Dolan backed her motion adding it was “unbelievable” the length of time this matter had dragged on.

A spokesperson for the Council said that if they sought a prosecution through the courts for non-compliance with the Section 59 Notice against the current owners it still wouldn’t, even if successful, compel the owners to undertake the works required to stop the hotel structure from continuing to degrade.

“If you were someone who had an unauthorised extension or if, like we have seen in the media in other counties, an unauthorised building, you would be pursued and made to address that, and yet here we have a structure which is dangerous, which is open to people to enter and we can’t get the owners to do anything,” added Cllr Bohan.

“The Planning Authority will once again contact the current owners of the hotel and separately seek legal opinion of the most effective course of action to be pursued,” outlined the Leitrim County Council spokesperson in conclusion.