Taoiseach asked to intervene on HSE case of Cloone mother 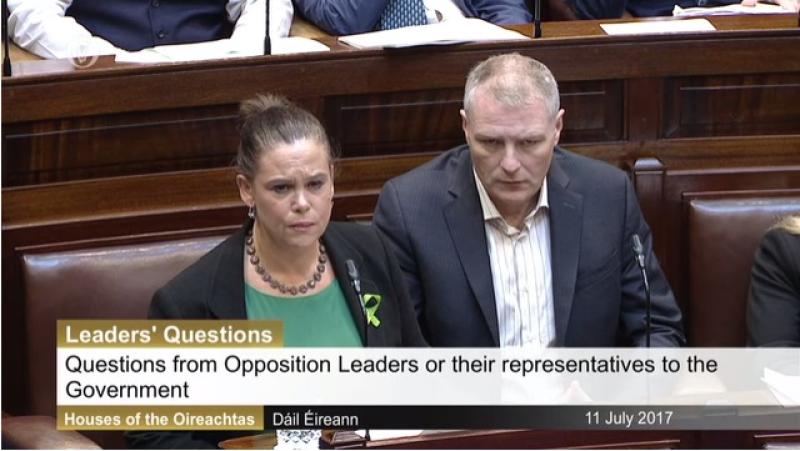 Taoiseach Leo Varadkar has been asked to intervene and help with the case of a  41 year Cloone mother seeking a HSE care package.

Olivia Harte from Cloone suffers a rare parkinson disease that affects her lungs and breathing. She has been lying in the ICU unit in Cavan Hospital for the past six months awaiting a care package to allow her to return home.

Sinn Féin Deputy Martin Kenny said he has been dealing with issue for months and they have “tried every avenue” to get the HSE to put in place a 24hour nursing care package along with ventilation equipment.

He said their final option wato ask Taoiseach Leo Varadkar to intervene. Deputy Mary Lou McDonald raised the issue in Dail Eireann this afternoon, Tuesday July 11  and called on the Taoiseach to intervene as a “last resort for the family.”

Deputy Kenny explained to the Leitrim Observer that Olivia was admitted to Cavan Hospital last December, but the hospital were willing to discharge her in early January “pending a care plan.” He said Mrs Harte currently  takes up one third of the ICU in the hospital. She has two young children aged 7 and 6 years who attend Cloone NS and the family are eager for her return home.

Speaking in the Dáil, Deputy McDonald said Olivia Harte was one name paying the consequence of the “chaos within the health service.” She described the scene where her two small children aged  7 and 6 year old  have to play by her bedside in the hospital a few days a week.

McDonald said Olivia has been refused a HSE grant twice, she has celebrated her birthday, the birthdays of her two children and her 10 year wedding anniversary in hospital. “Olivia Harte wants to go home to her family.” She asked for the government to give the Harte family some “dignity.” She said Olivia is one of 4,500 people waiting on home care packages.

Taoiseach Leo Varadkar said he did not have the specific details and would not discuss individual cases in the Dáil but pledged to follow up the case with the Minister of Health and would ask the HSE to give the case it’s “full consideration.” He noted from his experience as a GP that providing ventilation at home is “very difficult and not straight forward.” He said the number of delayed discharges have fallen over the last two years, he also said there has been an increase in home care and home help packages.

In responding Deputy McDonald said the HSE are refusing to fund the care package “despite medical advice.” She stated “she can go home - the single barrier is the HSE.” She asked the Taoiseach to release the funds.

Taoiseach Varadkar said he would not direct the HSE to make a decision as "resources must be allocated by professionals."