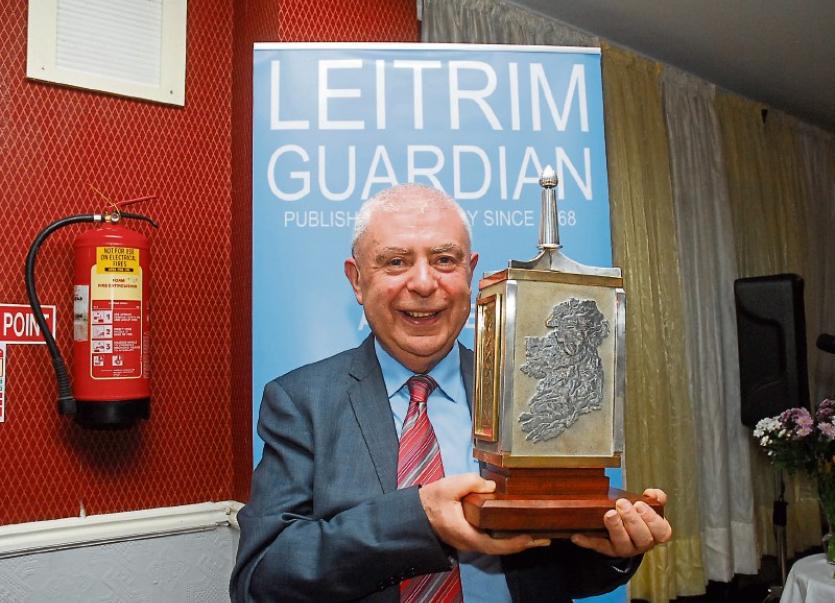 I was indeed very honoured when I got the news that I was the 2017 Leitrim Guardian Person of the Year.  I knew I was following in the footsteps of very influential Leitrim men and women, who had been honoured with this award and many of those people are here tonight. I knew they had a major influence in shaping Leitrim in many ways both locally nationally and indeed internationally. It was the most wonderful night of my life and I accepted the award on the basis that it was an award that belonged more to my family, my friends, my work colleague and the hundreds of acquaintances that I have met throughout the years.

I have been working in the Mental Health Services for the last 42 years and I regard this as a great privilege and honour.  I get up for work every morning with a spring in my step.  I have visited thousands of homes and talked to many people who despite struggling with various problems in their lives are always courteous and accommodating.  I always regarded them as friends, friends who have taught me so much about life and to have been able to help them in some small way over the years has made me a much better person.

On the night I became Leitrim Person of the year I spoke about the importance of instilling in our young people the importance of volunteering.  We live in a world where we can communicate with one another like never before and yet we live in a world where people are lonely and disconnected from one another. I had it as my principle aim for the year, to try and engage the young generation of Leitrim. I wanted to get them to think that there is a life beyond technology. I wanted to urge all our young people to take time, if only for one hour a day and to talk to them about the values of conversation and helping others without any financial reward. That for me would be a great days work. Through my work the one common denominator that causes the most problems in loneliness and the feeling of isolation.  Talk costs nothing, helping others cost even less and the satisfaction they would get from doing that one good deed would encourage them to do more.  If that happens I am confident we will be living in a much better place.

While chatting with my colleague Valerie Cogan, the idea of promoting the theme of volunteering and better communication among young people was born.  We decided to run a seminar in the Bush Hotel in Carrick on Shannon called ‘Leitrim’s Health is Wealth’.  The event took place on the 3rd of May and I was overwhelmed when four hundred people filled the main ballroom in the Bush Hotel.  I would without doubt say that this was the highlight for me as Leitrim Person of the Year. The event was fully supported by the Leitrim G.A.A. County Board and all the clubs throughout Leitrim were represented on the night. We were also delighted to have all the Leitrim Primary and Secondary schools involved.

I was invited to the Leitrim Peoples Association Dance in London and it was a great honour for me to speak to the many Leitrim people who had immigrated from Ireland over the last fifty years.  I spoke on the night about how happy I was to celebrate with them - the many members of our global Irish family who make us proud and represent us so well in countries around the world. I was also invited to lead the Leitrim Peoples Association at the New York St Patricks Day Parade. I flew to New York but unfortunately due to a family bereavement I had to return home sadly two days later.

Myself and my work colleague Valerie have been busy in the last few months organising a charity event in aid of North West Hospice and the Irish Kidney Association which took place on the 28th of October here in the Bush Hotel in Carrick on Shannon.  Mick Flavin who is 30 years on the road was joined by Paddy O Brien, Louise Morrissey, Susan Mc Cann and T.R. Dallas. We had a wonderful night with a full house all wanting to dance!  We were delighted to be able to hand over €4000 to both charities.

I would like to thank the committee of the Leitrim Guardian for all the work they put into organising and continuing this event for so many years. It’s a very proud accomplishment that Leitrim has produced the longest running county magazine in the country and I hope that this is something that continues long into the future. Being awarded the accolade of the Leitrim Person of the Year is very special and it would be wonderful if this aspect of the Leitrim Guardian could be continued even if the magazine was no longer a viable option to continue with. Whoever has the privilege of being awarded the title of Leitrim Person of the Year has a platform to promote and celebrate all the wonderful aspects of our great county. I feel that it is something that could be run as an event in its own right with the proceeds each year going towards the many worthy charities within our community.

On the 6th of October I celebrated 40 years of marriage to Christina and I want to thank her for the huge amount of support she has given me over these forty years.  She has always been my rock and has always been there to support me in everything I do.  I want to thank my daughters Deirdre and Grainne for making me the proudest father in the world. I also want to thank my sons in law Martin and Danny and my five grandchildren, Conor, Chloe, Shaun and Aaron and Killian. I want to thank them for lighting up our lives. To my sister Mary, your love, advice and support is so much appreciated.  To my work colleagues past and present thank you for helping me in so many ways over the past forty two years but in particular I want to mention my fellow community mental health nurse Valerie Cogan, a true professional and a great friend who has given me such help and support since she joined the team in 2010.  I want to thank her for all the wonderful help she has given me in organising the many events that I undertook as Leitrim Person of the Year.  I am now in the autumn of my career but I hope to be around for another few years! I am so happy that there is a nurse of the calibre of Valerie working in South Leitrim who is so professional so caring and such a good listener who will carry on the good work in Leitrim for many years to come.

Thank you for a wonderful year.