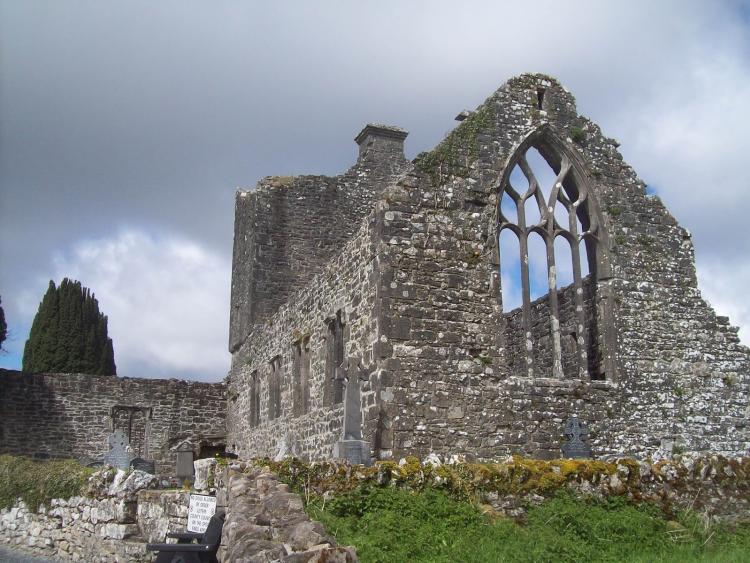 Ireland in the fifth century had no roads or railways. The topography was rugged. There were vast stretches of primeval forest, bogs and marshland near rivers and lakes. Some narrow streams might be crossed gingerly on felled tree trunks placed side-by-side across them.

Wider rivers near human settlement had shallows created by the mounting of boulders and stepping stones (fords, or atha in
Gaelic placenames) where walkers could tread slowly across, getting their feet wet.

Footpaths through thick forests were flat and winding in places, but swung their way sharply uphill and along wavy contours on ridges and higher hills. The ground could be stony in places, which must have tested the simply clad feet of walkers. The footwear may have been animal skin wrapped around the feet, with rough wool lining. Then travellers had to tread their way cautiously through marshland and bogs, trying to avoid sinking into concealed puddles and bogholes. Rain was common and heavy, making the slow going more miserable.

The forests were teeming with wild animals. The dangerous ones included hairy tusked hogs, wolves, bears, foxes and untamed wild cats. Feral dogs could be dangerous disease carriers. Small bands of two-legged human raiders and plunderers were also to be feared in the forests – they ambushed and bludgeoned their victims. In the forests, the law of the jungle prevailed.

The Brehon laws had a Christian ethos and only came a few centuries later after Celtic christianity had been firmly established with widespread monastic communities. We don’t know if the Druids gave much thought to the promulgation of ethical principles.

In the 1930s the poet T.S. Eliot wrote a poem about the Journey of the Three Magi through hot and cold deserts on their way to Bethlehem. Eliot’s poem has a narrator, one of the caravan entourage that accompanied the three wise kings. He tells the story from a simple physical point of view, unaware of the spiritual dimension:

“A cold coming we had of it,
Just the worst time of the year
For a journey, and such a long journey:
The ways deep and the weather sharp,
The very dead of winter.”

In a different topography, in a cold raindrenched, tree-canopied and boggy Ireland, Patrick and his accompanying fellow evangelisers trudged slowly on prolonged missionary travels. The Romans found Ireland cold and named it with a Latin word, Hibernia, meaning winter.

TRAVELLING IN GROUPS FOR SAFETY
Priests, nuns and assistants made up the groups. Some members of the party would have local knowledge and a grasp of the dialect of Gaelic, so their job was to trek ahead and alert communities about the peaceful purpose of the groups about to visit them. Where were these communities? Small numbers of fishing families lived in stone and timber crannógs on lake islands.

Some communities lived along the banks of rivers like the Shannon. Many forest communities lived in clusters of raths or
so-called fairy forts on hills (for drainage and safety) beside cleared patches where primitive animal husbandry and gardening supplemented the still important hunting and gathering opportunities provided by the forests. One such rath community was found at the hilly Drumlease area near the modern village of Dromahair.

When evangelising groups arrived at a settlement they sought comforting boiled water to wash their weary feet with. Some group members would have killed wild deer and other animals with spears.

Others might have caught salmon or trout in the rivers with nets made of bark and rushes. Such food was offered to the host communities to cook and serve up in the evening. Host communities would have offered cooked vegetables and collected fruits and water cresses. Wild geese and ducks trapped or killed with spears were sometimes cooked to vary the menu. Archaeologists know that butter and cheese were part of the Celtic diet, and that grain such as oats and barley were milled into rough flour with grindstones. Warm porridge was cooked often. A caky bread was baked, sometimes on heated
flat stones, and served up with honey garnered from beehives in forest trees. Archaeologists have surmised that an opaque beer made from fermented cereals was drunk. The milk of cows and tamed goats was abundant.

If the people in a designated catchment area numbered several hundred, Patrick and his party had lots of teaching, preaching and baptising to do. They spent weeks at some spots. Church buildings were started. Nuns founded simple community houses made of wood and stone. Drumlease in Leitrim was such an area and is mentioned in the Book of Armagh.

Once Patrick was satisfied that a Christian community was soundly established he left a few members of his entourage in charge to build further on what had been established. Then his party, possibly joined by newly-converted members of the rath community, headed off on foot further into the forests and marshes.

The pre-Christian Celts had 400 gods, many of them believed to dwell on hills, in groves, near sacred wells and in the vicinity of lakes. (Halloween is nowadays a reimagining of these deities being disturbed by the change from autumn to winter.) Patrick, and Declan of the Deise, and Palladius lived at about the same period in the early fifth century. Each of them toured in groups around different parts of Ireland. They endured difficult journeys in efforts to change the world view of what the bemused narrator in Eliot’s above mentioned poem calls “an alien people clutching their gods.” They transformed a pagan civilization into something radically new.

* Garreth Byrne is a member of Dromahair Heritage Group.