Series finale of Choir of Ages to be aired tonight 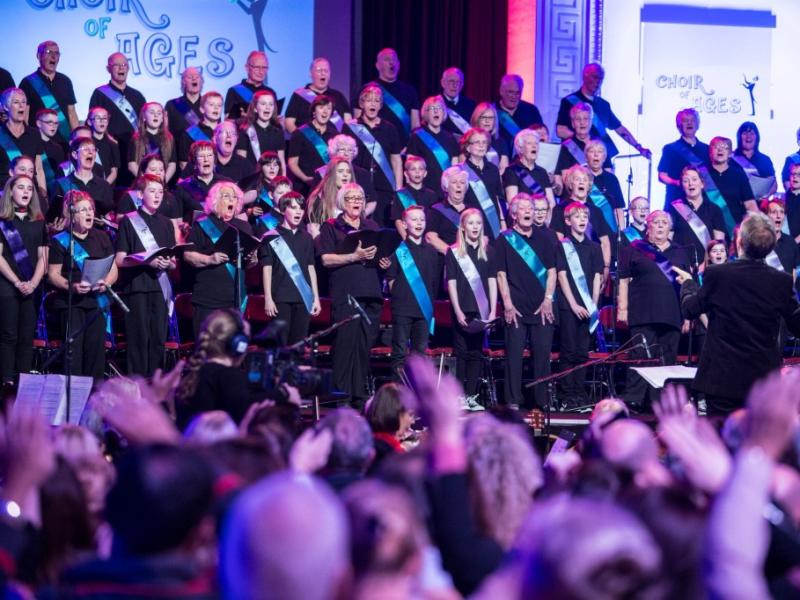 The finale of the acclaimed RTE series, 'Choir of Ages' will be aired tonight (Thursday) on RTE 1 at 10.15pm.

Ireland’s world-renowned concert orchestra conductor and choirmaster, David Brophy is back with a new vision. After his transformational experience with the High Hopes Choir where he proved that music could bring hope and positivity to the lives of men and women affected by homelessness, he is now on a mission to empower our youngest and oldest citizens, tackle loneliness and digital isolation, and to bridge the gap that exists between them through music.

Never one to shy away from a challenge, David Brophy is taking on the daunting task of assembling an inter-generational choir with school children from 7 – 12 years old and senior citizens from 65 – 90 year olds, from both North Leitrim and the Crumlin/ Walkinstown area of Dublin.

David Brophy’s Choir of Ages for RTÉ ONE is a heart-warming and joyful series, where the OAPS prove that they are still young at heart by belting out pop songs alongside their younger counterparts! Our kids too, learn a thing or two from the older generation, as they embrace the songs from the past. Friendships blossom between young and old as they face the nerve-wracking prospect of several live performances and learn more about the other generation than they ever thought possible. This inspirational series brings two generations together in a unique way never before seen on Irish television, proving once again, that music is a universal unifier no matter what your age.

Friendships are deepening and voices are soaring as the grand finale approaches – David Brophy’s Choir of Ages concludes tonight on #RTEOne at 10.15 #ChoirofAges #DavidBrophy @tyronetv_irl pic.twitter.com/OEbh1a8F8X

Throughout the series the choir will sing at the iconic Rainbow Ballroom of Romance in Leitrim (where everyone from Dickie Rock to Big Tom has played). They also record their own music video, which goes viral with over 50,000 hits on Youtube and Facebook combined www.facebook.com/ChoirofAges

The choir are a little nervous ahead of the finale but all of their anxiety melts away as they hit the stage with musical icons, @coughlanmary @paulbradysongs @UnaHealy and @JohnSheahan. Tonight, @RTEOne at 10.15pm repeated on Sunday 17th at 4.40pm. #DavidBrophy #ChoirofAges. pic.twitter.com/bdkwmJsIDb

They are visited in rehearsals by a few famous faces including Katherine Lynch and Charlie McGettigan  and the grand finale takes place at the RDS Concert Hall featuring very special guests Una Healy, John Sheahan (the Dubliners), Mary Coughlan & Paul Brady.  In addition to this, on the night, the choir also receive a surprise ‘Good Luck’ video message from an array of celebrities including Jeremy Irons, Nathan Carter, Shane Filan to name but a few.