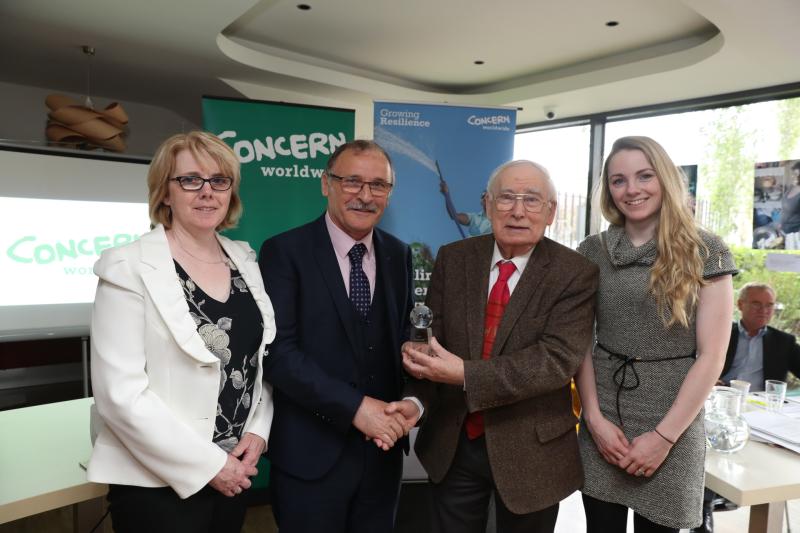 A Manorhamilton man who has helped raise tens of thousands of euro for the world’s poorest people has been honoured by Ireland’s largest aid agency Concern Worldwide.

George Hewitt (59) from Manorhamilton, Co. Leitrim, received an Outstanding Commitment Award at the 2018 Concern Volunteer Awards in Dublin for the fundraising work he and his family have done.

The father of five, who has seven grandchildren, began collecting for Concern about 30 years ago and took over the coordination of collections for the aid agency in Manorhamilton from his mother-in-law Rose McPadden.

George, who works for car parts manufacturer, MCI, said his family and friends help with collections for the annual Fast fundraising campaign and for other collections throughout the year, which has resulted in them raising close to €50,000.

The Concern volunteer said the suffering of millions of people around the world due to hunger, displacement and other major problems keeps Manorhamilton’s volunteers focused on raising as much funds as possible.

“You watch the news and you see what is going on in other parts of the world and it really gets to me,” he said.

“Reading and seeing what is going on drives me to want to do something to help.”

George was highly praised by Concern’s Chief Executive, Dominic MacSorley at the award ceremony, which he attended with his wife Margaret and daughter Mellissa.

“George supports Concern with a very positive attitude and hopes his children will take over in years to come to continue the Concern tradition in his family,” said Mr MacSorley.

Concern’s Volunteer Awards was created five years ago to celebrate the vital contribution made by the aid agency’s volunteers in Ireland – which helps fund the organisation’s overseas work that last year alone saw 27 million of the world’s poorest people reached in 27 countries.

Concern was formed by volunteers 50 years ago in 1968 as part of a major humanitarian response to the Biafran famine in Nigeria caused by civil war – a milestone that is being marked this year by the organisation at a number of events around the country.

More information about Concern, its history, its work and how to donate can be found on its website www.concern.net.