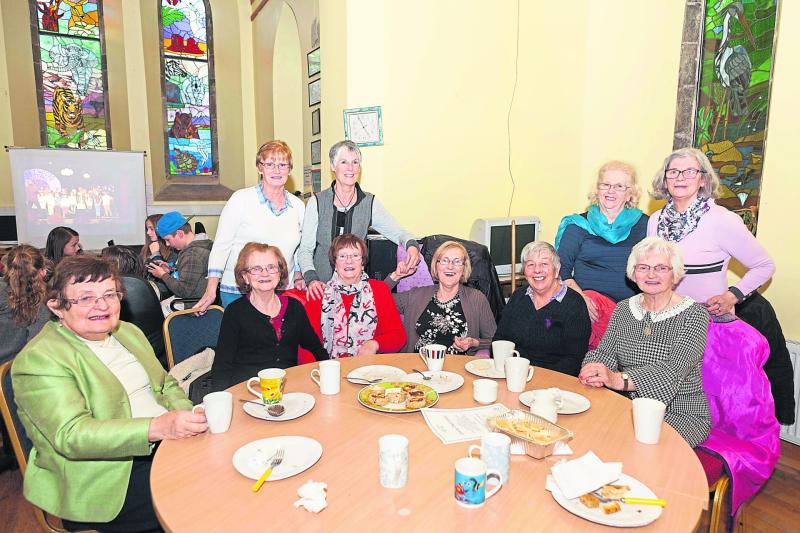 Members of the Choir of Ages pictured at the wrap party following the television series last year.

Rossinver’s New Ballagh Centre based Choir of Ages will be teaming up with several well known artists and other highly rated performers when they sing for Pope Francis I on Saturday afternoon, August 25 in Croke Park.

This weekend Pope Francis I will make an historic thirty-six hour visit to Ireland to officiate at the World Festival of Families events in Dublin; while he will also touch down at Knock Shrine during the visit, as well as attending a number of other official engagements in Dublin.

The Choir of Ages members are drawn from many parts of North Leitrim, West Fermanagh, West Cavan and South Donegal. Meantime the Choir of Ages gained national acclaim last year after they featured in a number programmes that were screened by RTE One television.

Last summer TV Company, Tyrone Productions were involved with the Choir of Ages in the making of a number of RTE television programmes in the New Ballagh Centre, in Kiltyclogher Community Centre, in the Rainbow Ballroom Glenfarne and in Dublin.

RTE Concert Orchestra Conductor, David Brophy was in charge of the baton for the Choir of Ages television performances. The Choir of Ages have been carefully rehearsing for this Saturday’s Papal Croke date over the past few months in the New Ballagh Centre under Choir Director, Dave Flynn.

Meantime Tyrone Productions are spearheading all the entertainment aspects of Saturday’s Papal visit Croke Park programme. The Choir of Ages will travel by coach to Dublin from the New Ballagh Centre on early Saturday morning and return afterwards late on Saturday night.

Commenting on the unique primary school and pensioners membership of the Choir of Ages an Irish Times report last November noted “it draws together older and younger voices, wavering and weathered on one side, tentative and unruly on the other, with a mission to perform together.”

The humble and gentile Pope Francis I will no doubt be impressed when he sees the unique New Ballagh Centre based Choir of Ages performing for him on Saturday.

Leitrim children to dance for Pope Francis in Croke Park