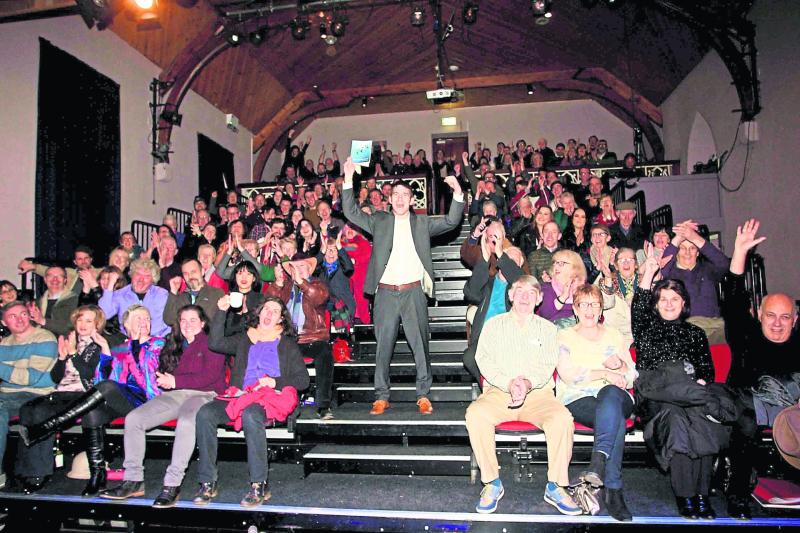 Triumphant homecoming: An ecstatic Stephen Murphy in a packed Glens Centre on Friday night last as he launched his debut collection of poetry PICTURE: JAMES MOLLOY

Those lucky enough to be present in The Glens Centre, Manorhamilton last Friday, February 1 were treated to a night that will go down in folklore, as a star-studded line-up gathered for the launch of the People’s Poet Stephen Murphy’s first book of poetry, From the Sea Hound.

The title is taken from two of Stephen’s great non-human loves (dogs and water) and it’s also a translation of his Irish surname. His poetry focuses on everything from the myths and legends of ancient Ireland to the current state of the country.

Mental health, family, politics and dogs are just some of the topics he touches upon in his spellbinding work.
“There are a lot of personal experiences. I write when ideas won't leave me alone,” says Stephen, when we speak ahead of the book launch.

Praise has been heaped upon him from all quarters, most notably by President Michael D Higgins, who described him as “a splendid, courageous, young poet”.

Online, his work has gone viral more than once, although he struggles to comprehend what that actually means. Talking about his relationship with the world wide web he says: “You give it all away to the internet and then you are left with that void. You spend months on something, only to give it all away.

“The idea of the internet as a vampire; it took me years to get my head around it. Stop feeding it. I haven’t put anything out there [recently] but I’m still writing away.”

Stephen recognises the potential of the internet, but he’s also well aware of its pitfalls. “It’s a double-edged sword. If it wasn’t for the internet I’d be still be up at the barn [where he filmed many YouTube videos] talking to myself. It’s got so much going good for it, but it has got so much darkness that we really need to know and learn and teach ourselves.”

Elaborating on the downside to focusing solely on life in the online bubble he says: “You are seeking that validation — so what? So you can go viral? People say ‘Congratulations on your success’ and I’m thinking ‘Success?!’ Viral sounds like something you should probably get a cream for in the chemist!”

Although he is wary about what online exposure can mean, his incredibly powerful poem, Before You Push The Chair, has generated huge reaction. While proud that his work has had such an impact, Stephen admits it is “with difficulty” that he copes with people telling him he saved their lives.

“It’s quite a lot to take on board. Some of the messages I have got from people are deeply harrowing and I’m not a trained psychologist. I’m just a poet who spends quite a lot of time thinking about and writing about things that concern me. When people get in touch and say ‘Your poem saved my life’, I don't know if you do cope with that, or if you can really process that.”

Although now living in Limerick with his wife Chelsea [who lovingly designed the book] and their young son, he was determined the book launch would take place at home.

There’s no doubting just how much his native county means to him: “I miss Leitrim because it is home. I miss going for a 20-minute walk in the forest. You bump into people for a chat and you come back two hours later. People have time to stop and talk to you. Limerick has been very good to us and it’s lovely but I think ... it’s where the heart is. My heart is in Leitrim.”

The book launch saw the likes of Maurice Lennon, David Keenan, Noel O'Grady and Claire Maguire take to the stage for an eclectic night of music, song and poetry. The volume was launched by Seamus Hosey, who described Stephen's poetry as “unusual and alluring”.

The rousing standing ovation that followed Stephen’s performance at the night’s end was a perfect illustration of just how powerful his poetry is.

From The Sea Hound is available from by clicking here