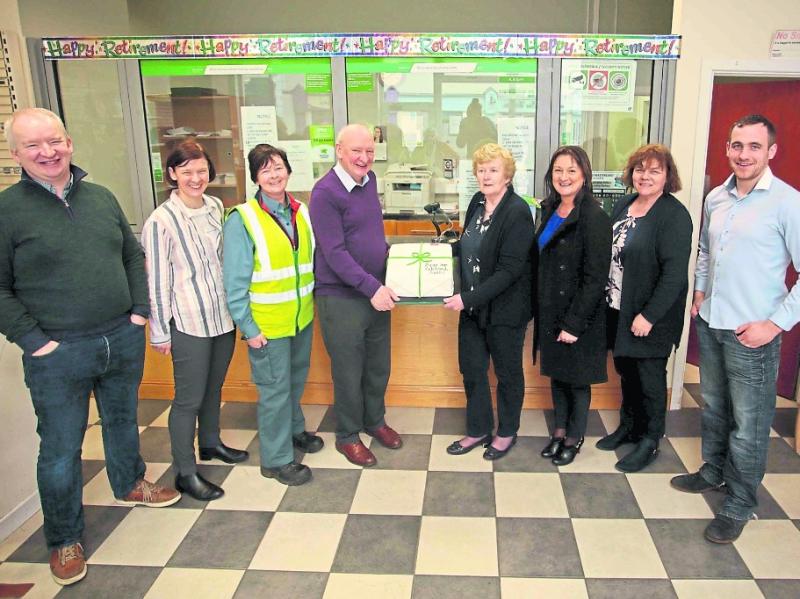 Retiring post master Aodh Flynn and his wife, Ann (centre) are pictured holding a cake to mark the closure of Manorhamilton Post Office.

Manorhamilton Post Office, which had run very successfully in Upper Main Street since the late Nora Flynn took over as Post Mistress in 1964 and which continued in business under Nora’s son, Aodh as Post Master from 1972, sadly ceased operating on Saturday last.

The new Manorhamilton Post Office commenced business in its SuperValu location off Upper Main Street on Monday morning, April 1. Aodh Flynn reflected on the hearing of a major news item from his early days in the former post office.

He said he remembered listening to RTE Radio News and hearing on March 8 “in 1966 on the morning Nelson Pillar was blown up,” which happened in the centre of O’Connell Street in Dublin, just outside the General Post Office.

The former Post Master recalled the Manorhamilton telephone exchange was located in the post office in the pre-automatic telephone era and when the service was provided on 24 hour 365 days-a-year basis by telephonists.

Aodh Flynn remarked how the telephonists that worked in the telephone exchange were not paid a penny extra for working on occasions like Christmas Day under the rules of the Department of Posts and Telegraphs that governed their employment then.

After Ireland joined the EU (EEC) in 1973 Aodh stated things began to improve for telephonists regarding working conditions and pay – as they did for many others postal service workers and indeed for public service workers; plus all workers in general.

Aodh accepts that being Post Master was an advantage for him when he was a member of Leitrim County Council for many years. “It was a major help to me as a councillor” he said.

During his time over the past half a century in Manorhamilton post office Aodh stated he seen massive changes occur in the way the postal services operated – from almost no technology in the early years to the coming on stream in recent years of the most advanced systems of information technology.

Many people in Manorhamilton and its surrounds have paid warm tributes to Aodh and his late mother, Nora for the exceptional services they provided for the public for so many years.

In Manorhamilton’s former post office both Aodh and Nora often worked well above and beyond the call of duty in assisting many people with the completion of forms, etc., and in several other ways and situations besides.

Aodh and his wife Ann are wished many happy years of retirement with good health to enjoy them.