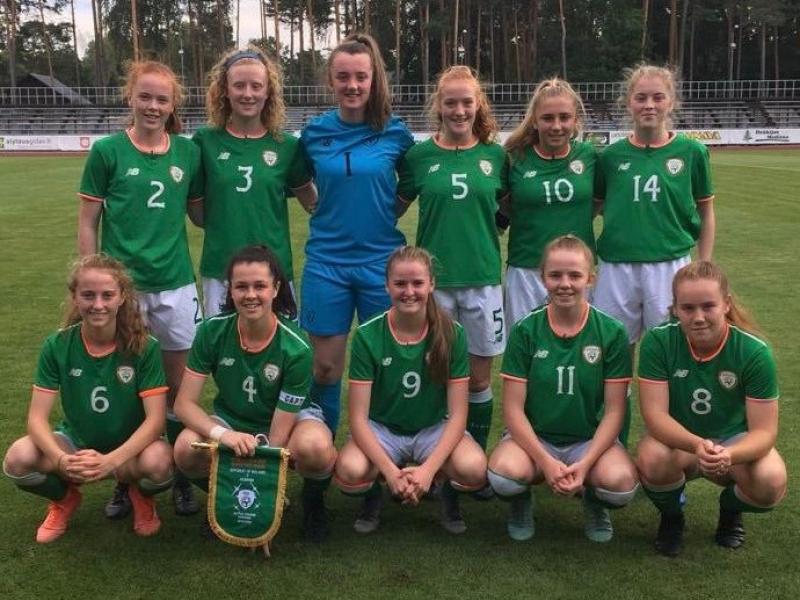 Manorhamilton's Muireann Devaney and her Sligo Rovers team mate Kate O’Dowd are currently in Lithuania as part of the Ireland U17 squad for three European Championship qualifiers which began yesterday (Tuesday) with an emphatic victory.

James Scott's Girls in Green began the three game series on Tuesday when they took on Albania, recording a very impressive 10-0 victory. Muireann was named in the starting 11 but wasn't on target.

She did however provide a number of assists and went close on a number of occasions including a late shot that hit the crossbar.

Ireland were 5-0 up by half-time with Emma McLaughlin hitting a first-half hat-trick and Kerryanne Brown netting a brace.

Goals in the second period by Laura Shine, Aoife Horgan, Aoibheann Clancy, Kate Slevin and Rebecca Watkins completed the scoring to give James Scott’s side a stunning victory in their first step to Sweden 2020.

The Girls in Green opened the scoring on 12 minutes through McLaughlin’s finish inside the 18-yard box. Nine minutes later Brown cut in from the right wing and slid her finish past Antigona Hyska in the Albania goal.

Ireland then hit three goals in four minutes. First, McLaughin hit her second of the game after controlling the ball on her chest and smashing it past the keeper. Then Brown rounded the goalkeeper for a tap in and two minutes later Sea Rovers’ McLaughlin completed her hat-trick with another finish inside the box.

At half-time, McLaughlin and goalkeeper Leah Hayes Coen were switched for Shine and Emma Ring.

Clancy made it 8-0 with great strike from 30 yards but Slevin out did her team-mate with a 40-yard effort following a poor clearance from the Albanian defence.

Watkins’ overhead kick finished the scoring on 89 minutes to make it a perfect 10 for Scott’s team and the Women’s Under-17s.

Head Coach James Scott was thrilled with his side’s performance. He said: “It was a really good performance and more importantly a great win for the team. We know that these games can come down to goal difference so that was very much in the players’ mind when they went out in the second half.

“You often see performances drop off in the second half when you’ve such a lead at half-time but the players stuck at it and got the win they deserved.”

Scott said that he anticipates Friday’s game against the hosts Lithuania to be a much tougher test.

He added: “We can enjoy our win but attention now goes to Lithuania. They lost their game against Greece and are the hosts so they will be looking to prove a point. The staff and the players are full focused and we look forward to another challenge.”

Yesterday's game will be followed by qualifiers against Lithuania (Friday, September 13) and Greece (Monday, September 16) as part of the first round of qualifying as they look to take a step closer to next year’s tournament in Sweden.