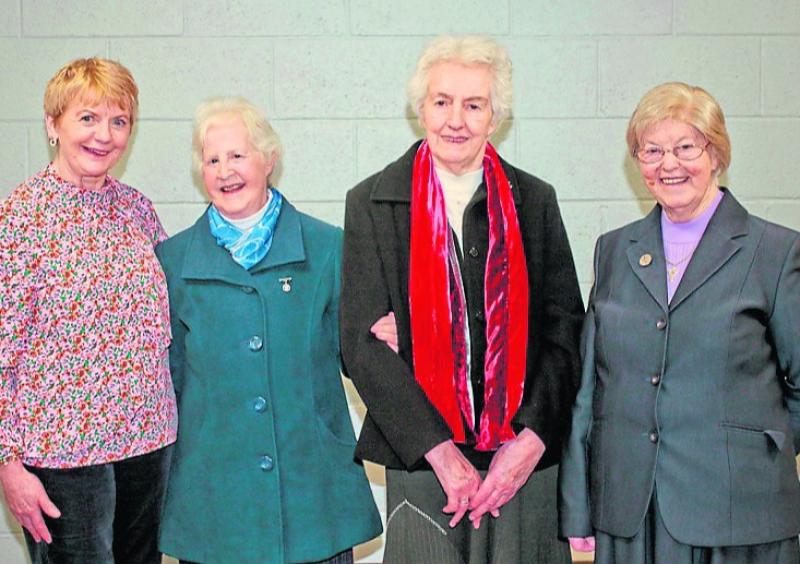 Cáit Ferguson, left who worked with Sisters Jacinta, Catherine and Dolores in Our Lady's Hospital, is pictured with the nuns at the farewell function in the Bee Park Community Centre

There was a large attendance at the Mercy Sisters Farewell Mass in St Clare’s Church on Saturday morning and afterwards in the Bee Park Community Centre where the Sisters valuable contributions to many aspects life in Manorhamilton over several generations was marked by a number of presentations and other tributes.

Monsignor Liam Kelly, the Kilmore Diocesan Administrator who was assisted by a number of priests, presided over the Sisters Farewell Mass in St Clare’s Church. The Mercy Sisters had worked in Our Lady’s Hospital for many decades prior to their retirement a number of years ago as nurses.

Gerard Gilgunn and Margaret McDermott made presentations on behalf of the Cloonclare-Killasnett Parish to the Mercy Sisters at their Farewell function in the Bee Park Community Centre.

Prior to that Paddy Croal, who was representing the Cloonclare-Killasnett Pastoral Council, welcomed the three Sisters – Sr Jacinta Marron, Sister Catherine McMorrow and Sister Dolores Kilbane – and the large attendance to the Farewell function.

Maureen Keaney gave a very interesting talk at the Farewell function on the coming of the Mercy Sisters to Manorhamilton over 130 years ago in 1890 and on their work as nurses in Our Lady’s Hospital and originally in Manorhamilton Fever Hospital Infirmary.

Prior to their retirement a few years ago the Sisters of Mercy worked in Our Lady’s Hospital in the noble and caring profession of nursing.