A Leitrim's man Journey into Dusk

Des Keaney was born and raised in Manorhamilton, but spent his working life in and around Dublin. He returned to live on the Barr Road in Rossinver but soon began losing his sight. This is his story. 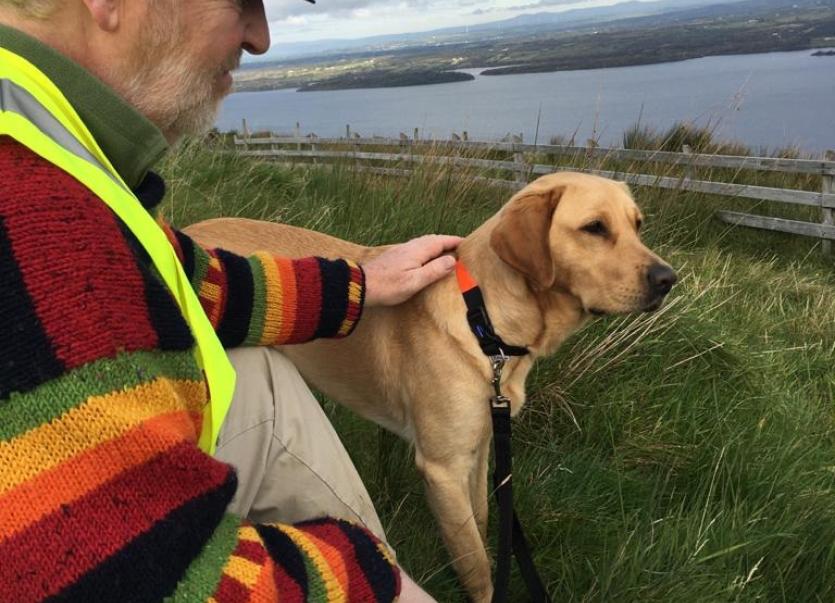 He was too polite to ask. I could sense that a friend I hadn’t spoken to in a long time was interested in what my eyes could see. So this is my story.
Everyone whose eyes stop working has a different story. Some have no light perception at all. Some can only dimly perceive light and shade. Some have ‘tunnel’ vision where a little central vision remains but the peripheral is gone.
For others, it’s the opposite - they have some peripheral vision but no central. Yet others have very blurred vision that no glasses can correct. Some people have to put up with extreme light sensitivity even though they can’t see much at all. Some people go blind instantly, some over years.
I’m one of those losing sight slowly, although it doesn’t always seem like that. It’s an inherited condition called Late Onset Retinal Degeneration. The ‘late onset’ means it only started in my early fifties. My grandmother, mother and all her brothers were affected.
I first noticed a problem with my night vision in 2010 on a foggy predawn drive over small roads in north west Donegal to Carrickfinn airport. I had trouble sorting out the edges of the road. It was a new kind of scary and I was glad to get there in one piece.
I stopped night driving altogether on moving home to the country roads of Leitrim in 2013. I was ok during daylight until I noticed blank spots around my central vision. It took me a while to understand what was happening as none of the previous generation had mentioned this and I wasn’t expecting it.
I went for an eye test in 2016, failed and stopped driving there and then. It broke my heart. In an hour, I went from an independent traveller to a dependent one. It was the first of many changes.
There was a circle around my central vision in which I couldn’t see. But it was deceptive in that it wasn’t black or grey. My mind merged all the colours -so if I were looking at three dogs on a beach, say 100m away, I could see the middle one but not the other two. They just vanished until I scanned and found them. 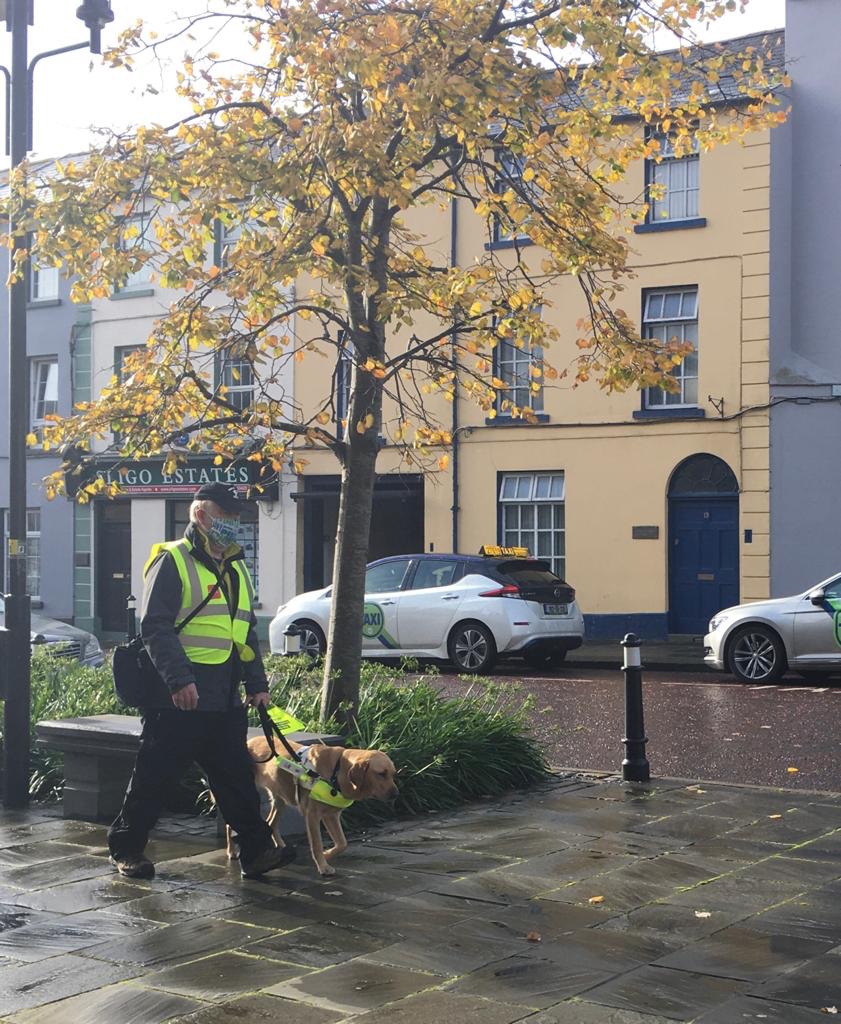 In 2017, I had the wonderful opportunity to go kayaking with whales off Vancouver Island in Canada. Thankfully I was with three people with really sharp eyes as I could hear the blows but only found them occasionally. I had no problem seeing a pod of young Orca powering straight towards me, diving under the kayak at the last moment and surfacing behind.
There was a wonder to listening to a midnight chorus of humpbacks blowing just off the little island on which we were camped. I had a lot to relearn about camping. like, never put anything down. Everything had it’s place and had to go back there or into a pocket, otherwise it was lost. Three years later, this is how I operate everywhere.
A low point at the end of the trip was when we got to a whale museum. I was really looking forward to it. After two weeks on the water, I couldn’t read the signs or see the exhibits. It was utterly disheartening. I sat down and I cried. However, the trip was a lifetime highlight and I’m so glad I got to go when I did.
I can’t imagine what it must be like to lose one’s sight instantly. The good thing about losing it gradually is that I can take it one step at a time. When a new problem presents itself, I have to drop the frustration and find a workaround.

Sitting on dogs and cats

Sometimes that happens quickly and easily, sometimes not. It is important that the workaround will be ok when all sight is gone, otherwise it’s only temporary. In the last two days, I have sat on one large dog and one small cat! We all survived. But with four dogs and two cats, I now have to check the chair every time I sit down. It’s not as easy as it seems. It takes time and concentration to establish a new habit. Since I made the resolution, I’ve sat on the other cat! She also survived.
Have a think about how you might pour a cup of tea without spilling or scalding, go shopping, brush your hair, walk over rough ground or recognise someone. The people who train guide dogs use a blindfold in their own training and learn a lot from it.
Losing one’s sight is like the death of a very close family member. A sudden loss is like a sudden death. There is huge shock, anger grief and an instant, massive change to one’s life. A slow loss of sight is like a long, lingering illness. The difficulty is that there’s never a day off, no down time. The problems come in waves.
In my current wave, my remaining pinpoint vision in my left eye has been enveloped in a dark mist so I can no longer see any detail. A week ago, I could see one icon on my phone and just read my laptop if the light was right. Now that’s gone. Everything on my phone is done using Voiceover, a screen reader built into Apple phones. It works brilliantly but takes a lot of learning. This piece is written on an iPhone and a Bluetooth keyboard with the screen turned off. My laptop will remain dormant until I learn a similar screen reader for Windows.
This assistive technology is liberating. I can do anything from reading a food packet to navigating using my phone. Forty years ago, my mother was limited to a talking book machine which needed a wheelbarrow to move it around. Now it’s all in my pocket. 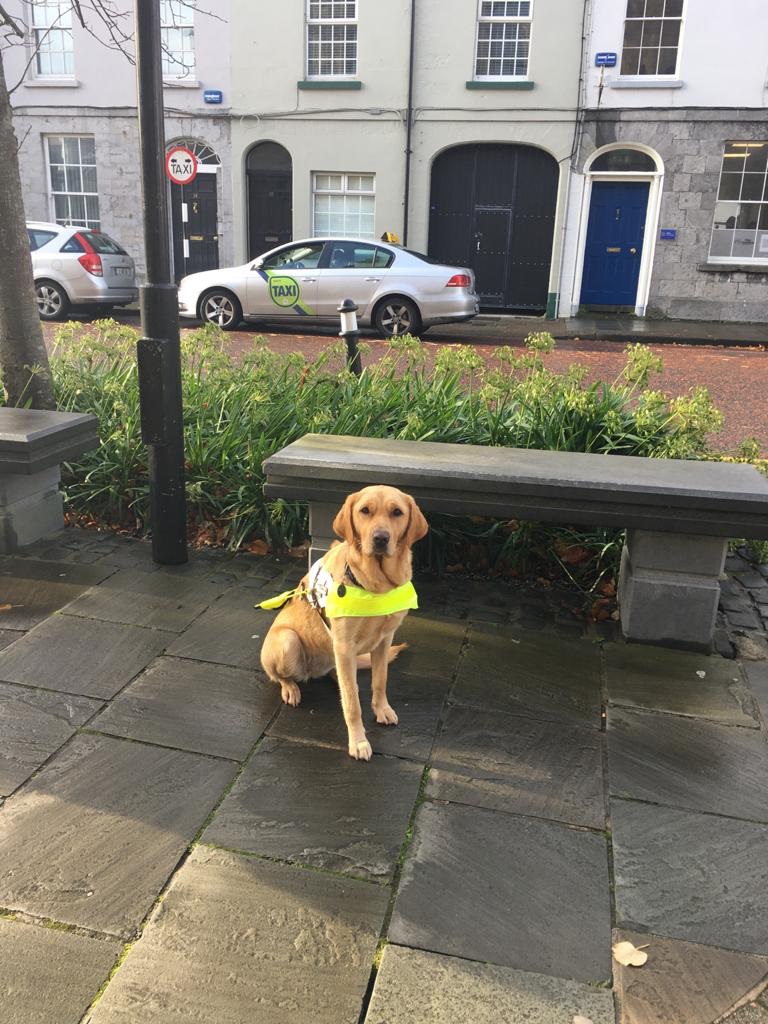 One of the fantastic things is becoming part of the blind community. And lockdown has been a massive benefit as I can now ‘zoom’ weekly groups in Cork, Dublin, Sligo and Donegal, covering anything from tech support to counselling. It makes a massive difference in reducing isolation and helps problem solving. I’ve met some lovely people.
The National Council for the Blind (NCBI), Fighting Blindness and Irish Guide Dogs for the Blind (IGDB) facilitate these groups and give great support to those with sight problems.
I was really excited last October when guide dog Paige arrived. She’s a lovable, bright two-year-old Labrador golden retriever cross. She can lead me safely around town, learns new routes quickly and knows where the to find the dentist and the pharmacist. She has a special love for a deli in Sligo. I can say ‘find Cosgrove’s’ from 400m and she’ll take off at a gallop as she gets a piece of ham there! Even in lockdown, she has transformed my ability to get around independently. It’ll be even better when public transport is back.
All the learning has been essential, challenging and frustrating, interesting and I’ve a long way to go yet. It’s been similarly difficult for my wife Sonja. Being the partner of someone with sight loss is all of those things and she’s been brilliant. I can be a right pain when I get frustrated and it can be very difficult for her to know when to help and when to let me find my own way. She’s also got very good at describing what’s happening around us. Another job is to tell me who we’re meeting in the street.
Not being able to see faces, expressions or body language makes it much harder to communicate, especially if I’m not quite sure whom I’m talking to! However, it’s amazing how many strangers will have a chat because I’ve got Paige with me. Lots of people will say ‘Hi Paige’ and they haven’t a clue of my name! It’s great.
The amount of goodwill I come across in shops, on the street and the roads is heartwarming.
Sight loss is a major trauma but is not going to kill me unless I stray under the Donegal bus.
There is great hope for the future for both prevention and cure thanks to work being done in medical research and genetics.
There are some things you can do to help partially sighted or blind people.
Say your name on meeting.
Leave the dog alone when she’s in harness. She’s working. Paige is a super friendly girl and wants to say hello to everyone but she has a job to do and needs to concentrate on that. Also, some people don’t like dogs and I don’t want her scaring someone by accident.

Avoid the use of words like ‘here’, ‘there’, ‘this’ or ‘that’. They don’t make sense to a blind person.
Try not to point or beckon.
Neither visually impaired humans or guide dogs are very good at social distancing so verbal help is very welcome.
If you see a visually impaired person looking lost, ask them if they need help. Don’t assume you know what’s best for them.
Someone who is losing their sight and lives alone may become very isolated and virtual prisoners in their own home, particularly during Covid. A call or a visit to check if they need anything may make the world of a difference.

In aid of the wonderful Irish Guide Dogs, I’ll be walking 100km in May alongside Sonja and Paige. Our local walk, while only being about 3km, does have a hill of 80m. That’s about 2500m over the month which should shift some of the lockdown weight! If you’d like to make a donation, no matter how small, please see our fundraising page at https://guide-dog-day-2021. raisely.com/sonja-keaney
I hope this gives you a better understanding of sight loss.

Thanks for your interest.