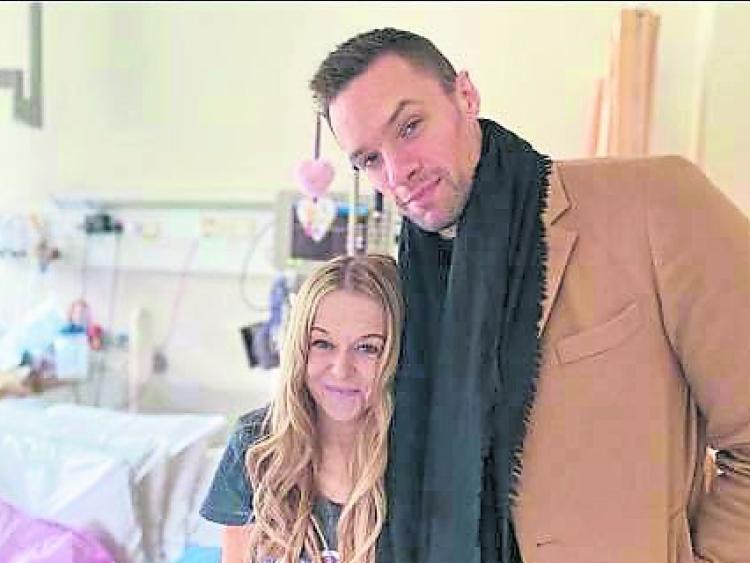 A beaming Jillian with Niall ‘Bressie’ Breslin, who visited her in hospital

It may have been a rough Christmas season for Longford’s cystic fibrosis warrior, Jillian McNulty, but Jillian is nothing if not resilient, a fighter, and determined to get back on her feet.
After weeks of updates from her brother, Fran, the Longford lady finally took to her own social media recently to post her first video of the year, updating her followers on her recovery and the progress she has made since coming out of the ICU.
“When I came out of ICU, I was very confused. I didn’t know whether I was awake or asleep. I didn’t know where I was. Some of the most bizarre things were going through my mind.
“I thought the nurses were drugging me. I thought they were trying to kill me, so I had to see a psychiatrist who had to put me on tablets because apparently this is all normal after being in ICU, especially for the length of time that I was in it,” Jillian explained, adding that she had finished the tablets that day.
“I’d wake up in the morning and I’d be screaming. I wouldn’t know where I was. It would take them ages to calm me down. That stopped last week but they left me on the tablets just in case it might linger, but it hasn’t.”
Jillian also had a test with the occupational therapist last week and, as she said herself, she “blitzed it”.
“It’s a memory test. Last week I didn’t do too well, but this week I got 98 out of a hundred and she said that that’s actually the highest that anybody has ever scored, so I was like ‘yeah, make sure you tell everybody that’,” Jillian laughed.
Jillian has had to learn to walk again to retrain her brain so that she can get back on her feet properly. One of her proudest moments so far was when she managed to stand up for the first time.
“There’s a test I have to do because I’m very unsteady on my feet,” she said.
“I can walk but I’m like bambi, literally shaking. My legs are jelly and if I turn around, I go to fall over. But I did a test with the physio and the total score is 24.”
Physiotherapists thought Jillian would get 16, 17 or maybe 18 out of 24 but the inspirational Longford woman clocked up a score of 21, losing points only for needing to hold a railing when going up steps, or getting wobbly when looking up or down while walking.
Jillian spent a lot of time on IVs over the past several weeks but those were stopped last week. She’s back on dialysis at night and she says everything is “going the right way”.
In fact, going home is on the cards for Longford’s CF champion, with doctors considering letting her home sooner rather than later.
“I’m kind of keen to get out and get going. I really want to get home. I know I’m going to struggle at home for the first couple of days because obviously it’s completely different to being in hospital. And I want to give myself a couple of days rest before the ball,” she said. Because, yes, she’s still planning her annual Valentine’s Ball to raise money and awareness for Cystic Fibrosis Ireland and St Vincent’s Hospital, Dublin.
“I’m really looking forward to the ball. Literally, this is going to be a celebration of my second chance at life and I have been given a second chance at life and I’m so, so grateful,” said Jillian.
“And the ball is going to be my comeback party, so please buy tickets. Numbers are down but I’m trying not to worry because it’s obviously going to be different this year. I was hoping to have videos and collages there but obviously I’m just not up to it this year, so it’s going to be slightly different.
“And I kind of think back to the video I posted just before I got sick saying that I wasn’t going to hold another ball until I got my kidney. Clearly, the IVs were affecting my brain because already I’m thinking about next year’s ball and my mother is going ‘oh my god, stop it Jillian’.
“I just knew there was something not right with me and I did say that I felt like I was dying and I was actually right. So I’m glad it wasn’t just in my head,” Jillian added.

“But yeah, the ball is going ahead. The ball is going ahead next year, 2021, 2022, 2023. It ain’t stopping. I’ve always said my aim is to create awareness and funds for cystic fibrosis and I’m going to continue to do that, regardless.”
She’s certainly done that from her hospital bed and while in ICU. Her brother, Fran, posted regular updates to Facebook to let Jillian’s large number of supporters know just how well she was progressing.
Speaking to the Longford Leader last week, Jillian explained that it was “touch and go” for a while.
“They didn’t think I’d survive the first ten days. It was touch and go but on the eleventh day, I moved my finger or nodded my head or something and it just went from there. They are amazed at how quickly I’m progressing. They didn’t expect such a quick recovery. Thankfully I’m still here to tell the tale,” Jillian told the Leader.
Now she’s just eager to get out of hospital so that she can go to Dundrum and buy a pair of shoes to match the dress she plans to wear to the ball.
“If you know anyone that wants a brilliant night out, a fantastic meal in gorgeous surroundings, then please let them know about the ball,” Jillian said in her video to the masses.
The ball will take place on Saturday, February 15 at Lough Rynn Castle, Mohill, Co Leitrim. Tickets are €65 and include a prosecco punch reception at 7.30pm sharp, a delicious four-course meal, music by harpist, Aine McLaughlin, followed by Gobsmacked, and a raffle on the night.
Jillian’s parting message to all her well wishers was one of gratitude.
“Thank you for all your well wishes… I’m so glad I’m back. Woohoo!”

For more information on the ball, or to purchase tickets, see Valentine’s Ball for Cystic Fibrosis on Facebook and send a message to get your tickets booked.