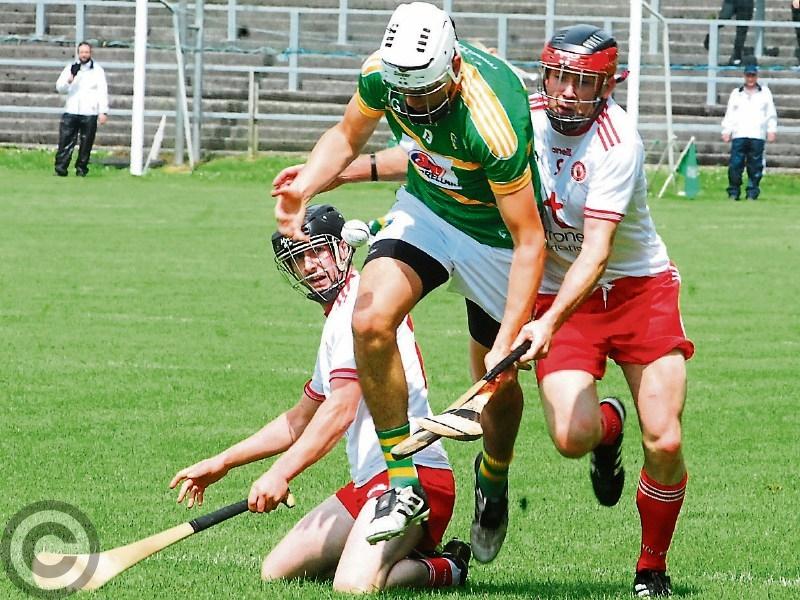 Leitrim, who battled gamely throughout, still fell to their second Nicky Rackard Cup defeat in a row on Saturday afternoon in Páirc Seán where Tyrone proved to be much the superior team.

Despite a promising start Leitrim was unable to curtail the scoring power an Ulster side that shot points consistently to keep the scoreboard ticking over while the home side struggled noticeably in this regard.

Leading by seven points at the break Tyrone was even more in command of the outcome at that stage than even the margin of their advantage might suggest. Tyrone also killed of any possibility of a Leitrim comeback in the opening four minutes of the second half when they added an unanswered 1-3.

In this period Tyrone’s best player Damien Casey shot a goal and a point while Pierse O’Kelly and Bryan McGurk hit over a point each for the visitors. At this stage the Tyrone management could afford the luxury of withdrawing Casey, who had taken a slight first half knock, from the fray.

For Leitrim to survive in the Nicky Rackard hurling championship a victory over Louth in the competition’s relegation play-off game is required this weekend. It will be a difficult challenge for Leitrim since Louth drew with neighbours and Nicky Rackard Cup semi-finalists Monaghan on Saturday in Dundalk.

Leitrim made a bright start to the game on Saturday and matched Tyrone stride to stride in the in the opening exchanges. Cathal O’Donovan put Leitrim ahead when he shot the contest’s opening score, a 4th minute point from play.

Unfortunately for the home side their lead was shot lived as Damien Casey levelled for Tyrone in the space of a minute with a point from play. Leitrim’s Colm Moreton and Enda Moreton received yellow cards in 9th and 11th minutes.

Tyrone took a lead in the 13th minute they never subsequently relinquished it after Damien Casey converted a free. Over the next three minutes Tyrone increased their advantage with points from play by Aidan Kelly, Damien Casey and Chris Kearns.

Zak Moradi reduced the Tyrone lead when he fired over a 16th point. Shortly afterwards Tyrone ‘keeper, Conor McElhatton made a smart save that denied a Leitrim goal chance that fell to Cathal O’Donovan.

Clement Cunniffe cut Tyrone’s advantage to 0 – 2 when he tapped over a 19th minute close-in free. Over the next two minutes points were exchanged at opposite ends by Tyrone’s Justin Kelly, from play, and Leitrim’s Clement Cunniffe, from a free.

Tyrone edged further ahead the 25th minute after Pierse O’Kelly, Justin Kelly and Ryan McKernan slotted over point each from play. In reply for Leitrim Clement Cunniffe added a point from a 28th minute free.

Over the next five minutes Tyrone stretched their lead to 0 – 7 after Damien Casey, Pierse O’Kelly and Justin Kelly hit over a point each without reply from Leitrim.

Before the interval Leitrim’s Clement Cunniffe from a ‘65’ and Tyrone’s Chris Kearns from play traded a point at opposite ends to send the O’Neill county in leading by 0-13 to 0-6 at halftime.

In the opening four minutes of the second half Tyrone increased their lead to thirteen points after Damien Casey added a goal and a point while Pierse O’Kelly and Bryan McGurk shot a point each.

Clement Cunniffe opened Leitrim’s second half account in the 41st minute when pointed his fifth placed ball of the game. Over the next six minutes Tyrone again stretched their lead with Dermot Begley and sub Tiarnan Morgan hitting over a point apiece from play.

A Leitrim surge in the 50th and 51st minutes saw the home side reduce the deficit with Tyrone to ten points after Colm Moreton hammered home a well-taken goal and Zak Moradi added a point.

Pierse O’Kelly hit back with a 53rd minute Tyrone point. James Glancy narrowed the gap with the O’Neill county men to eight points when he fired home Leitrim’s second goal within five minutes.

But Tyrone decisively asserted control once more in the contest when adding three unanswered points by the 62nd minute after Pierse O’Kelly, Liam Armstrong and sub Josh Ferguson shot over in turn.

Points were swapped at opposite ends during the next two minutes after Cathal O’Donovan, along with sub Alan Duffy, for Leitrim and Josh Ferguson, along with Tiarnan Morgan, for Tyrone all hit the target in this period.

A rally between the 68th and 70th minutes saw Leitrim reduce the gap with Tyrone to eight points after sub James McNabola, Cunniffe (free) and Cathal O’Donovan shot a point each.

But after that Tyrone’s Aidan Kelly hammered home a goal and Pierse O’Kelly shot a point to ensure a Nicky Rackard Cup semi-final while Leitrim’s Cathal O’Donovan shot his side’s last score in the contest, a point from play.

Main Man: Even though he only played for 42 minutes of Saturday’s game, Tyrone’s Damien Casey dictated maters decisively for the O’Neill County to ensure their comfortable win at the end.

Talking Point: Leitrim was badly hit from the outset when three leading team members, Conor Byrne, Liam Moreton and Ben Murray, could not field for the showdown with Tyrone. Their loss made the possibility of a win over Tyrone very unlikely and now Leitrim face a relegation final.

Ref Watch: In what was a quite a non contentious contest Aidan Ferguson operated as even handed man-in-the middle. Perhaps he could have kept closer to the play at times.

Highlight: Tyrone keeper Conor McElhatton’s alert and quick reaction save from a 16th minute goal bound Cathal O’Donovan shot was impressive. It certainly thwarted Leitrim’s hopes of getting back into contention at that stage.

Lowlight: After suffering a twenty-four points drubbing by Donegal and a clear cut 11 points defeat by Tyrone, Leitrim has had two bad Nicky Rackard Cup experiences so far.