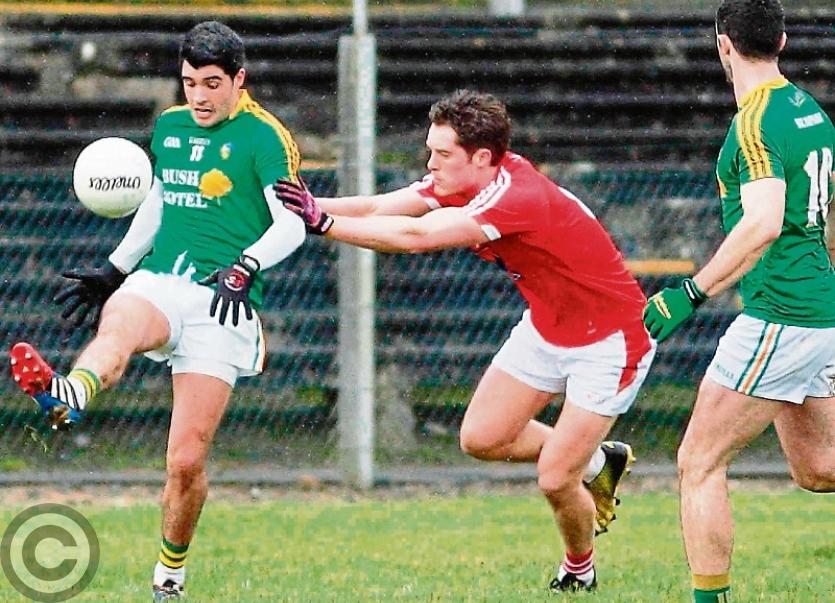 Emlyn Mulligan gets his shot away during Leitrim's last meeting with Louth in Carrick-on-Shannon, a 0-16 to 2-9 victory for Leitrim in the 2016 Allianz NFL

It was the draw that everyone wanted but Leitrim’s hopes for next Saturday’s All-Ireland Senior Championship Qualifier has been badly hit by an exodus of players from the County Senior panel.

The Leitrim Observer understands that up to six players who were members of the squad for the New York and Roscommon matches in May are no longer involved with the County Senior team ahead of next Saturday’s Qualifier.

Pairc Sean Mac Diarmada host Louth in the second round tie (7pm throw-in) looking for their third ever victory in the competition but the loss of fifth of the Senior panel cannot have helped preparations for Saturday’s crunch tie.

Mohill's Oisin Madden and Aughawillan's Mark Plunkett departed for the US shortly after the loss to Roscommon while it is believed that 2018 Leitrim top scorer Keith Beirne has also departed from the squad in recent weeks.

Leitrim manager Brendan Guckian confirmed to the Observer on Monday afternoon that some players had left the squad - “There is a few gone off the panel, there are a few lads in on the panel. Look, it is always disappointing when people leave the panel for whatever reason.”

However Guckian stressed that Leitrim have to focus on what was in front of them rather than who is not available - “We are focussed completely on the group that is there and that is the way it has to be. Ideally, you want to finish the year off with the same panel that you started it with but that is not always the case.”

Leitrim's manager would not reveal who had left the panel and Guckian insisted that he and the team were fully focussed on producing what they show on the training field against Louth on Saturday.

Both Plunkett and Beirne started against Roscommon but were substituted while Madden came on as a sub after starting in New York. The Observer understands that Ronan Kennedy and Keith Keegan from Mohill and Colm Moreton of Leitrim Gaels may have also left the squad in recent weeks.

The loss of so many first choice is a big blow that Leitrim simply can't afford to suffer while Louth, in contrast, are able to call on Ryan Burns (suspended for their win over London), Jim McEneaney (back from injury) and members of their U20 team who were defeated by Offaly at the weekend.

Leitrim's Qualifier game against Louth on Saturday will be preceded by the Connacht U17 Championship meeting of Leitrim and Roscommon (5 pm throw-in).

l See this week's Observer for preview and interviews of Saturday's match and see www.leitrimobserver.ie for updates, news and reports from Leitrim's Qualifier game.