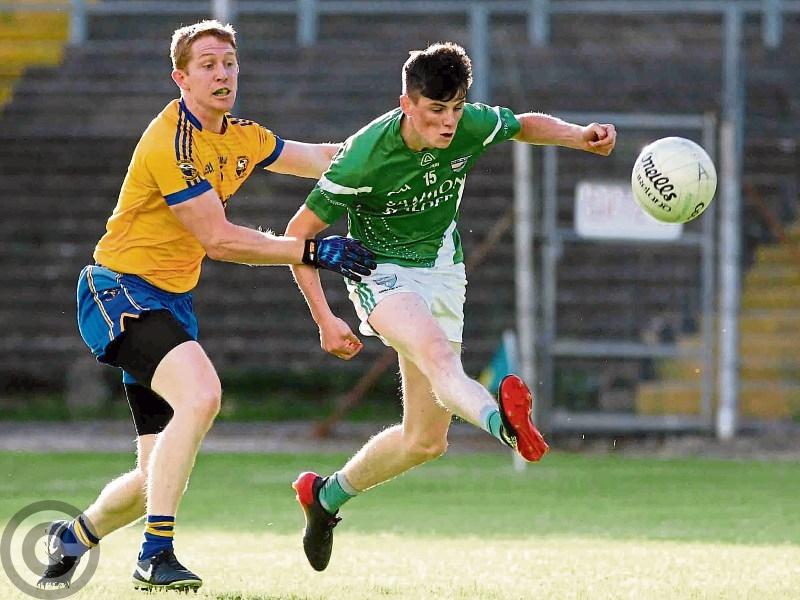 Goals at the start of each half enabled Glencar/Manor to chalk up a facile win over Aughnasheelin in Saturday’s quite one-sided Senior championship clash in Páirc Seán Mac Diarmada.

The gods were certainly not smiling on Aughnasheelin when they conceded these somewhat fortuitous goals that paved the way for the north Leitrim outfit’s victory.

Aughnasheelin also finished the game with 14 players after Paddy McWeeney 45th minute second yellow card dismissal. Due a big number of player injuries it was a very seriously understrength Aughnasheelin side that took the field for their clash.

Despite this Aughnasheelin did manage to match Glencar/Manor in the opening 24 minutes of the action when the north Leitrim men only led by two points.

After that Glencar/Manor upped their game a gear and Aughnasheelin had no answer to it for the remainder of the game. Because Glencar/Manor was so dominant in the exchanges for the last thirty-six minutes of the action, it is perhaps a little difficult to access their real worth from this massive win.

The Manor men were very wasteful during the course of the game when registering 16 wides; 11 in the first half and five in the second half.

It was a dream start situation for Glencar/Manor in the game’s opening minute when Seamus Ryder finished a dropping ball to the Aughnasheelin net that was sent into the goalmouth by Conor Dolan.

Glencar/Manor increased their lead when Conor Dolan put over a free a minute later. Shortly afterwards at the other end Glencar/Manor had a let off when their goalkeeper Garry Hickey denied a Ciarán Cullen goal chance.

Brendan Mulvey and Evan Sweeney swapped points and Conor Dolan kept the scoreboard ticking over for Manor when he shot a tenth minute point. Two minutes later Barry McWeeney answered with a free. Evan Sweeney stretched Manor’s advantage when he shot a point at the end of the first quarter.

Aughnasheelin cut the deficit over the next eight minutes thanks to Ciarán Cullen who blasted a goal chance narrowly over the crossbar and then followed up with another point.

After this Aughnasheelin surge, they somewhat faded from the fray and Glencar/Manor powered ahead with five unanswered points, Fermanagh native, Seamus Ryder added two while Conor Dolan, James Glancy and Darren Sweeney chipped it with a point each.

Glencar/Manor led by 1-10 to 0-6 at the break but within two minutes of the restart, the Aughnasheelin challenge in the game was more or less ended when James Glancy sent in a speculative shot from the 45 metre line that slipped into to the net through the fingers of goalkeeper Gavin McWeeney.

With Glencar/Manor now very much in the driving seat, Conor Dolan (free), Darren Sweeney, Seamus Ryder and James Glancy added a point each.

Aughnasheelin woes were added to when Paddy McWeeney received a second yellow card in the 45th minute.

Fintan Fitzpatrick opened Aughnasheelin’s second half account when he put over a 47th minute point. Three minutes later Gavin McWeeney pulled off a super save to deny a Seamus Ryder goal chance.

Glencar/Manor increased their lead when Brian McDonald and Conor Dolan shot a point apiece. Before the end Barry McWeeney shot a consolation point for Aughnasheelin.

Main Man: Seamus Ryder, Glencar/Manor’s top scorer, was perhaps his side’s leading light since he posed a major and continuous threat for Aughnasheelin at the edge of the ‘square.’

Talking Point: The fact that Aughnasheelin put it up to Glencar/Manor for the opening twenty-four minutes of the game is something that the North Leitrim side’s opponents will note for their forthcoming championship clashes

Turning Point: When James Glancy struck a somewhat fortuitous goal right after the restart, he put the game way out of Aughnasheelin’s reach.

Ref Watch: Michael McGirl was effective and fair in his handling of this game and neither side could have any complaint with his decisions over the sixty minutes.

Highlight: James Glancy’s 27th minute long range point was a score that will probably rank in the top bracket of such details for this year’s Leitrim senior football championship campaign.

Lowlight: The outcome this game was foregone conclusion probably from as early as the first minute of the second half. It was very disappointing for all Aughnasheelin supporters, as well as for all the neutrals, in the small attendance.