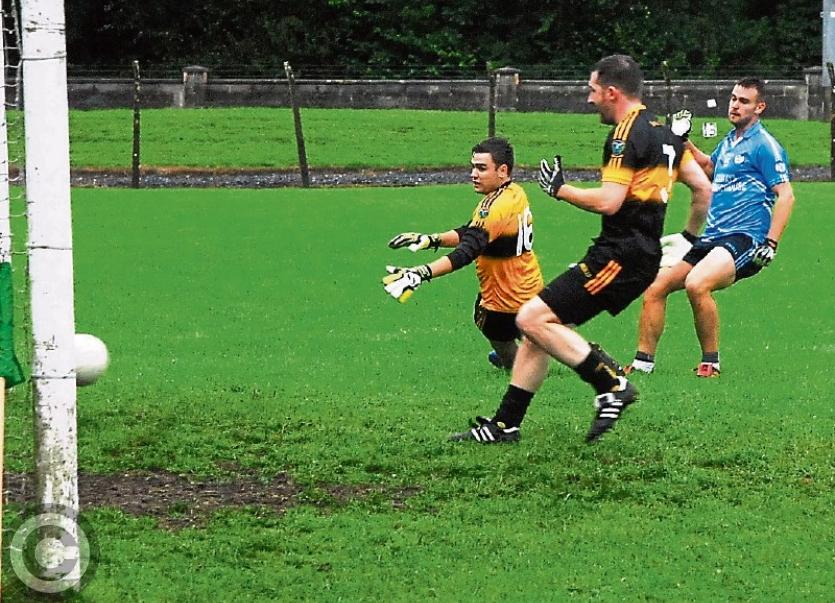 Martin Beirne drives the ball to the net for Allen Gaels second goal against Bornacoola. Photo by Willie Donnellan

An impressive Allen Gaels sent out a message that they will be a serious force in this year's Championship with the destruction of Bornacoola last Friday.

The opening game of this year's Connacht Gold Senior championship proved to be a damp squib as the Gaels were in complete control before a small crowd in a damp and wet Cloone.

The Drumshanbo outfit overcame an admittedly poor and lacklustre Bornacoola but the manner in which they went about their business suggests a new beginning for the Gaels.

It took a while for Friday’s game to get going on the scoreboard with Allen Gaels missing three chances to one for Bornacoola before Martin Beirne tapped over a sixth minute free for over-carrying.

But less than a minute later, Allen Gaels had gained control of the contest when a long ball found David Wynne who was fouled and Ciaran Walsh drilled the penalty to the net. Caleb Duffy then hooked the ball over the bar after good work from Wynne.

Bornacoola opened their account when Damien Moran put over a free but the game was effectively over as a contest on 12 minutes when a poor clearance went straight to an Allen Gaels player and three passes later, Martin Beirne drove the ball to net.

It could have gotten worse for Bornacoola as Caleb Duffy blasted a shot off the crossbar and although Damien Moran pulled back a point, the Gaels continued to dominate with Kyle Flynn scoring a lovely point from a tight angle.

It got worse for the Bors as Philip Howard was black carded for a rash trip before Sean McKeon converted a free. Ciaran Walsh fisted the ball over the Bors bar after some patient play back and across the goal before Diarmuid McKiernan left his goal to thump a 50 yard free over.

Damian Moran converted a free just before the break, all of the Bors scores coming from frees in the first half to leave the halftime score at 2-5 to 0-4 but that was the high point for the Bors as Allen Gaels would go on to completely dominate the second half.

Again the Drumshanbo men were slow off the mark but when they did get scoring, it came in an avalanche with 1-4 in a four minute spell. Bryan Beirne fisted over a good point on four minutes before Martin Beirne put over two excellent points while David Wynne added a fourth.

To add the icing to the cake, Thomas Mulvey was clipped as he advanced on goal and, after a yellow card for Conor McCauley, Ciaran Walsh drove his second penalty to the net on eight minutes.

Cian Mallon got Bornacoola’s first score 14 minutes into the second half but the Gaels continued to pile on the scores with Bryan Beirne, Thomas Mulvey, sub Shane Walsh and Martin Beirne (free) all pointing.

Colm Farrell drove a goal chance wide for the Bors as the final ten minutes petered out with substitutes galore from both sides while the game was held up for an unfortunate injury to Brian Duffy who was spun in a collision and landed very heavily on the ground before being taken to hospital in an ambulance.

Bornacoola did finish with a mini-flourish as Damian Moran put over a free while they grabbed a consolation goal when Damian Moran’s free was saved. Brian Conroy’s first effort from the rebound was brilliantly blocked but the Bornacoola man got to the second and drove it to the net.

Caleb Duffy replied with a late point for the Gaels but the last score fell to Ronan Mulligan for the Bors.

Main Man: Rather than one or two outstanding performances, this was a great all round display from the Gaels - Caleb Duffy, Ciaran Walsh, Martin Beirne, Alan Wynne, Diarmuid McKiernan all stood out while for Bornacoola, Gary McCloskey, Jason Conroy, Brian Duffy and Liam Mulligan did their best.

Talking Point: It's early days and they will meet much better opposition but Allen Gaels look a formidable outfit under Sean Pierson. They are fit, they work hard and are well organised and nobody doubts the talent that is in their ranks. Bornacoola were poor but the Gaels never let them be a factor - nobody will get an easy game from the Drumshanbo men.

Turning Point: Martin Beirne's goal for Allen Gaels was their second three pointer and put the Drumshanbo men well in control, they were never in trouble after this.

Ref Watch: Michael McGirl didn't have a lot of tough decisions to make and did a good job.

Highlight: The teamwork and slick moves for Allen Gaels second goal illustrated the difference between the teams.

Lowlight: Bornacoola's challenge never got off the ground and for the opening game of the championship, it was something of a damp squib.