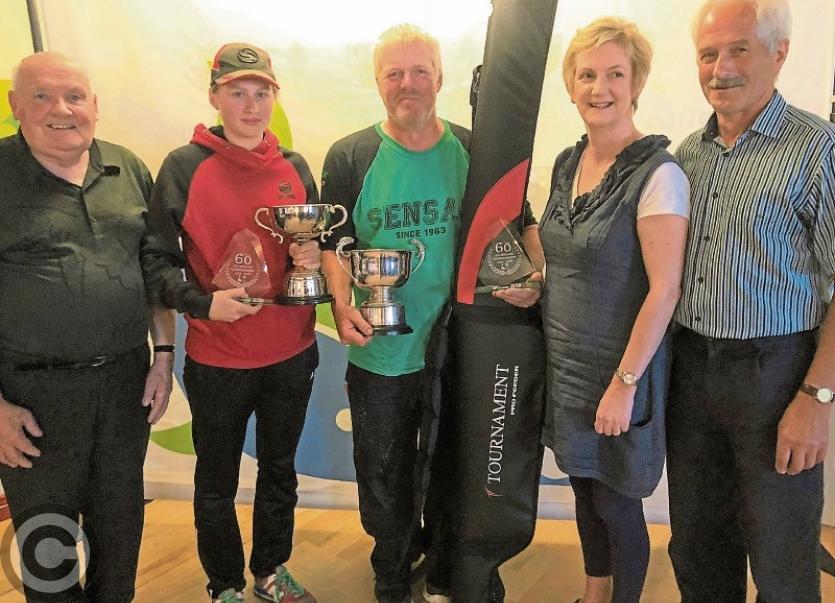 Sensas angler Julian Kendrick wins the anniversary edition of the All-Ireland with a 25kilo bream catch from the Shannon Erne Waterway. A well-deserved title for one of Ireland’s top rods who has been on form all year.

The 60th edition of the All-Ireland Championships which took place on Sunday in County Leitrim saw 116 anglers representing the four provinces check in at the 1st Leitrim Scouts Den ahead of the five-hour match.

The anniversary of the event saw it return to Ballinamore where the championships were formed sixty years ago when four times as many anglers fished the competition in the area synonymous with coarse angling in Ireland.

Back then the match held on Lough Garadice also included the opportunity to fish for pike. Lough Garadice still featured heavily in the 2018 competition with Church, Cully and Connolly’s shores included along with several other venues to include Lough Scur, Kiltybarden and County Cavan venues Brackley lake and Town Lake, Killeshandra.

Conditions were perfect for Julian who with the wind blowing into his face seized the opportunity to fish for bream from Cully’s Shore, Lough Garadice.

His tactics played off and after an hour fishing at 40metres using corn, maggot and worm the small fish went away and he hooked bream, in groups of 3 or 4 for the duration of the match finishing with 58 fish including small hybrids and perch.

For his win Julian received a Tournament rod bag from Daiwa UK who are also celebrating sixty years in the tackle industry along with his trophy from Leitrim Crystal and Sensas Ireland ground bait.

Terry Shortt Chair of Ballinamore Angling & Tourism proudly presented Julian with the silver perpetual cup which was originally donated to the federation by the people of Ballinamore back in 1959.

Julian said “I am delighted to have won this prestigious title on this special occasion and honoured to be the 60th engraving on the cup alongside the list of champions over the years. Thank you to the NCFFI for the organisation of the event and to the sponsors.”

Ed Rogers from Belturbet also took the opportunity fishing the next peg to Julian to finish second in the competition with 14.800kg and receive a selection of items from Preston Innovations and Sonubaits to include items from the world championship luggage range.

In third place was Nigel Spencer over from Scotland with his top weight of 12.800 from Brackley Lake earning him a €50 voucher from Irish Bait and Tackle Limited and Sensas ground baits, particularly useful as he spends the next week fishing festivals in the region.

Enniskillen angler Jordan Hall a former Irish Youth International and winner of the Classic fished the rocks on Lough Scur for 11.800kg earning him 4th place followed by Dungannon angler Romauldas Irzikevicius and his 11.550kg catch from Brackley Lake.

Both Jordan and Romauldas received an Evoke Reel and Magnetic Hook Box among other items from Tubertini UK.

Four ladies turned out for the event to fish alongside the men for their own title. 19 year old Deimante Deima from Mullingar fished a great match at Town Lake in Killeshandra to take the Ladies Champion title of 2018.

Deimante fished a 9m pole for around 100 small fish on single maggot, feeding Sensas ground bait and a lot of casters. Along with trophy Deimante received a £50 from Fishing Tackle & Bait in Enniskillen and Sensas ground bait.

In second place was Drumshanbo angler Mary Tigwell whose catch of 1.680kg from Church Shore earned her a selection of tackle items from Tubertini UK LTD

Deimante says “Fishing is my favourite hobby and I fish as much as I can. I am therefore excited to have won this competition and would like to express my thanks to my dad who got me angling in the first place and has taught me many valuable lessons.”

A full pay-out of all entry with 5 peg sections and the top five followed the match at Terry Shortt’s Heritage Bar in Ballinamore where all the competitors received an engraved paperweight to commemorate the 60th edition event from Leitrim Crystal.

The NCFFI’s Tommy Lawton presenting to the prize-winners thanked the members of Ballinamore Angling & Tourism for their contribution to coarse angling and all those for travelling long distances to take part in the championships.

The NCFFI would like to congratulate the winners and all those who attended. Special thanks go to the Lakelands Angling Ballinamore for their assistance on the ground, Waterways Ireland and Inland Fisheries Ireland for their sponsorship and the tackle sponsors.

To Ballinamore Angling & Tourism and the 1st Leitrim Scouts whose fine den facilitated the anglers draw, a perfect indoor venue with catering along with plenty of room for parking, on-site net-dip and bait sales from Irish Bait & Tackle Ltd.