If you don’t set goals, how can you hope to achieve anything?

So where to fall on the Dublin debate? Somewhere in the nuanced middle 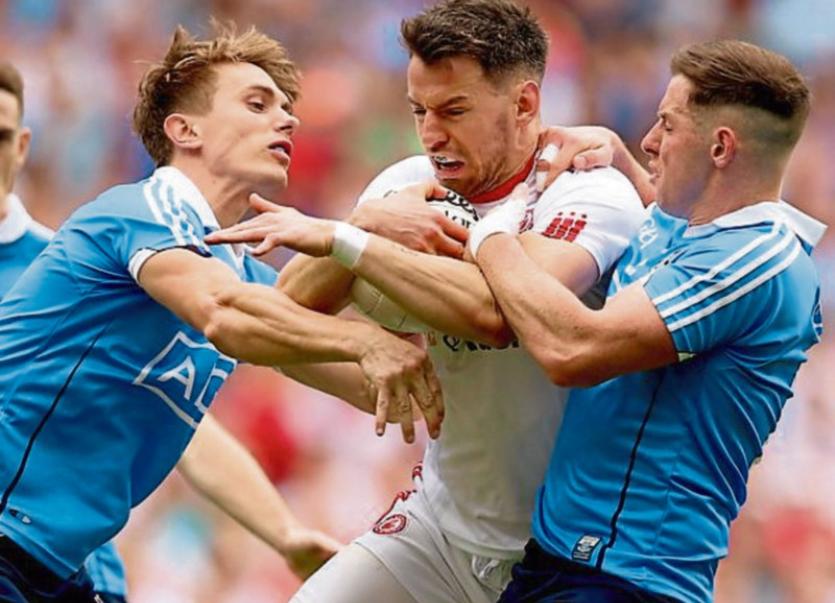 A cloud of inevitability fell over Croke Park when Dublin netted their first goal via the penalty spot (for the record, it was a stone wall penalty, no question).

The cloud replaced the air of inevitability that followed the 2018 championship.

This is a truly exceptional Dublin team, but what has made them exceptional hasn’t been properly discussed. It has been argued in black and white instead of exploring the full nuances that make up the truth.

On one side of the debate you have those that argue that their dominance is solely down to the exceptional funding of coaching and games in Dublin over the past ten years.

On the other side, you have the (mainly Dublin contingent) that dismiss this argument as sours grapes and claim this team is the coming together of a group of exceptional players and their success is down to the fact that they work harder than any other team in the country.

Does money matter? Of course it does.

It supports every club in Dublin in employing at least one games development administrators (GDAs). Some have more (the additional personnel funded by the clubs). Some clubs pull from population bases larger than Leitrim and are engaging thousands of players.

Many people believe that the greatest influence such GDAs have is in the direct provision of coaching and skills development to players. That’s a misconception.

Their primary role is to ensure that their club is utilising optimal coaching structures while assisting the volunteer coaches in the club in accessing and engaging with the best coach education possible. The GDAs also work with the clubs’ feeder schools, and here they are more hands on with the youngsters.

Over the course of ten years, such a systematic approach will ensure a steady flow of players through all ranks, from underage to adult, and from club to inter-county. Dublin could have thrown money at the issue. Instead they built a strategy first and funnelled the money into people and structures that were designed to achieve a certain outcome.

Dublin GAA is reaping the rewards of their 2011 Blue Wave strategic plan, one so farsighted and ambitious many dismissed it as unrealistic.

It had the audacity of setting a target of winning Sam Maguire every three years. Now, becoming the first senior team to win five in a row seems more realistic than any team stopping them in 2019.

So yes, money talks. Once it is used wisely.

But that also dismisses the incredible job done by Jim Gavin and his backroom team including our own Declan Darcy. As many Premiership managers have proven, you can pull together some of greatest players of a generation and fail to them to gel as a team.

Gavin & Co. have developed a team based on values, unity, and submission of the ego/individual, and as a result a talented group of players have become even greater than the sum of their exceptional parts.

Take Ciaran Kilkenny as an example. Most teams have a Ciaran Kilkenny in their midst. He is a talented player with phenomenal conditioning who makes the right decision most of the time. In most teams, they are considered work horses and rarely get the recognition they deserve.

This was Kilkenny’s lot during his first few years on the Dublin team – his contribution was questioned. He wasn’t in the same calibre as Diarmuid Connelly, Paul Flynn. What makes Kilkenny stand alone in this role in the modern era is the equally unselfish work of his Dublin team mates.

Whereas similar players on opposition teams may run out of options while trying to retain possession, Kilkenny always has a couple of options open to him. And he invariably takes the right one.

Were Kilkenny playing for Down, or Sligo, or Laois, or Clare, he’d be considered a good footballer, a Trojan workhorse who pops up with a couple of scores in most games. Because he plays with and contributes to one of the greatest teams in history, he is finally getting the recognition he deserves and could well be named Player of the Year 2018.

So where to fall on the Dublin debate?

Somewhere in the nuanced middle. We could all use additional resources to help implement and realise lofty ambitions. But we must prove ourselves capable of using such resources wisely and well.

And we can all take lessons from Dublin’s approach – both the county board in terms of strategic vision and structures, and Jim Gavin & co. in terms of individual and team development and the submission of the ego for the betterment of the collective.