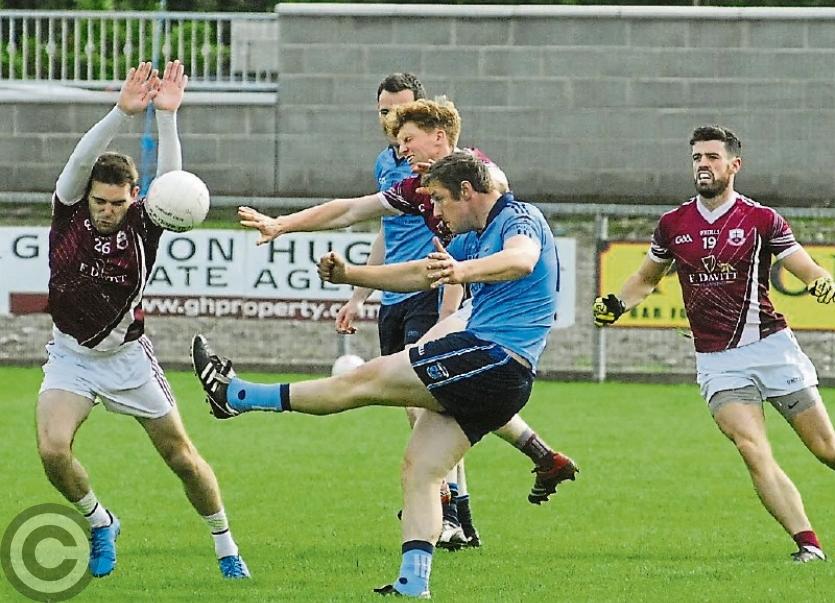 Conor Beirne shoots for a point against Drumkeerin - the Eslin man will have a big say on Sunday's game. Photo by Willie Donnellan

Eslin may really want to be underdogs for next Sunday's Smith Monumentals Intermediate Championship Semi-Final but everybody's favourite underdogs are definitely the favourites for their derby semi-final against Annaduff in Pairc Sean Mac Diarmada.

First and foremost, Eslin have already smashed three goals past Annaduff in the group stages, a 3-5 to 0-11 victory that underlined their credentials as championship contenders. It appears that Eslin took umbrage to the fact that it was pointed out that they had virtually qualified for the knockout stages by beating two second teams.

If that lit a fire under them, then well and good and while it is fair to say they are not a one-man show, players like Shane Beirne, Ronan Reynolds, Jamie Stenson, Brian Higgins, James McNabola all impressing, it's equally fair to say that without Tomas & Conor Beirne, they wouldn't be where they are today.

Teams can get lulled into concentrating on the brothers, leaving lots of room for their teammates to exploit but as Conor showed against Drumkeerin in the quarter-final, he might have not shot the lights out, he did provide the bullets for everyone else.

Will Annaduff be tricked into concentrating on the duo? Hard to know and even harder to avoid the pressure of concentrating on Conor & Mossy but Annaduff will have to come up with some way of nullifying their impact while also producing their best - not an easy task.

Annaduff are at their best when they move the ball quickly and accurately and they showed against Ballinaglera that they can withstand the pressure of a team coming at them, something that was a problem in recent years.

Alan Glancy, Kenny Cox, Conor Reynolds and Sean McNabola can get the scores that can propel Annaduff into the final but it will need discipline at both ends of the field.

In a way, Annaduff are in the perfect position - Eslin are favourites with the general public so Annaduff have nothing to lose. If they were looking closely at Eslin's win over Drumkeerin, they will have seen the north Leitrim men had more than enough chances to win it.

But again it comes back to stopping the immense influence of the Beirnes, it is far easier said than done. Conor looks motivated and fit and if he gets enough supply, you have to reckon he can do enough damage to Annaduff to send Eslin into the Final.