The Grenade from Glenade delighted with massive reception in Manorhamilton on her return home to Leitrim after Youth Olympic Silver medal in Buenos Aires, Argentina 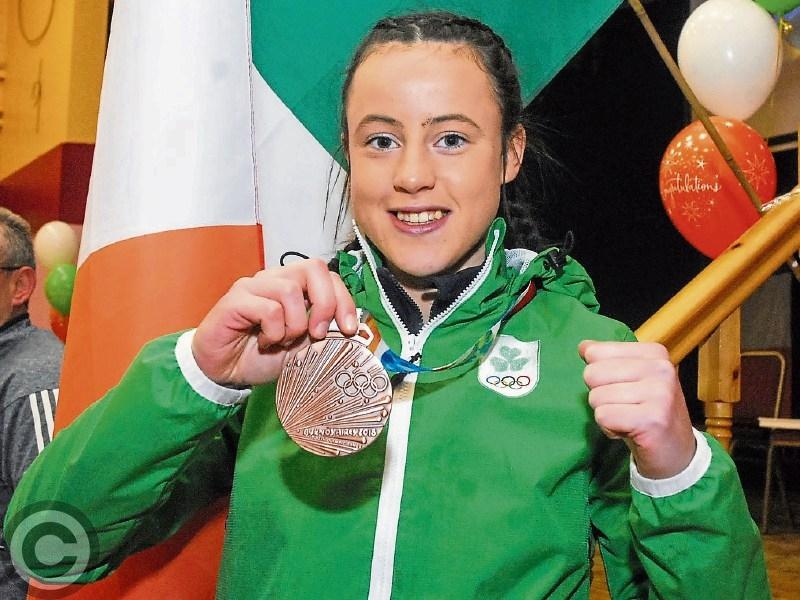 As Manorhamilton and Leitrim turned out in droves last Sunday evening to welcome home Ireland’s newest boxing hero, Déarbhla Rooney was already looking to the future!

Stunned by the reception that greeted her on the roads of Manorhamilton and in the Bee Park Resource Centre, Déarbhla commented “I’m absolutely delighted, it is fantastic to come home to such an amazing reception.”

And while all the talk was of her superb performance in bringing home a bronze medal from the Youth Olympics in Buenos Aires in Argentina last Wednesday, Déarbhla is setting her sights on the real thing in the years ahead.

Asked how it felt to come so close to a gold medal, having lost on a split decision to Thailand's Panpatchara Somnuek who went on to lift gold, Déarbhla showed the resilience and self-belief that is so vital to top class sport - “It is a good positive in my mind and good looking forward to the future that I was so close.

“It was inches and that I’m up there with the best. Hopefully in another few years I might get another chance at the big games and hopefully third time lucky.”

A rematch with the Thai boxer may be long term but the young Glenade woman doesn’t envisage taking much of a break after her heroics in Argentina - “I have the Intermediate Championships coming up in another few weeks so I might take maybe a week or two off and then get stuck in again.”

Motivation is a recurring theme for the Sean McDermott Boxing Club fighter and it was never better demonstrated by her reaction to losing the semi-final bout - “Initially I was very disappointed after losing out to the Thailand girl for a second time this year on another split decision.

“But to re-motivate myself and realise that I’m still in the Olympics and boxing for a bronze, I wasn’t going to come home without it. I came out of the ring, it was very disappointing but the first thing my coach Dimitry said to me was a big part of performing tomorrow is that you have to get your mental strength back and be focussed for your fight.”

Analysing her comprehensive victory over New Zealand's Te Mania Rzeka Tai Shelford-Edmonds in the bronze medal match, Déarbhla was hoping for a quick finish to the contest - “I was hoping to get the stoppage.

“I felt comfortable in the fight but you can never underestimate anyone or get too comfortable. For example in the third round I got docked a point and in boxing that can have a big impact but fortunately enough.”

It was Déarbhla reaction to that point deduction that really struck this writer as a clear demonstration of the Manorhamilton boxer’s true class as instead of letting it threaten her victory, Déarbhla actually forced the Kiwi fighter into two standing eight counts.

Not that it didn’t cause Déarbhla a heart in the mouth moment - “It was for a second but I said I’d pick it up another gear. Just to be on the safe side.”

Dealing with that pressure was also indicative of the way the Glenade youngster dealt with the profound pressure of keeping Irish Boxing’s incredible record of success going. Not since 2010 has an Irish Boxing team come away from a Championships without a medal and it was something she was aware of.

“I did realise that, it was actually the first thing Dean (Clancy) said in the airport going over to add on that bit of pressure but all I could do was worry about my own performance.”

Buenos Aires was also Déarbhla’s first experience of a multi-sport championships and it was something she enjoyed - “It was really interesting, this was my first time competing in a multi-sport event.

“It was really interesting to see how the other athletes trained and how they focused before their event and how professional they were. It was a really relaxed atmosphere and great support and that helped with my performance as well.”

Of course Déarbhla’s bronze medal attracted the attention of the nation with a back page photo in the Irish Independent, interviews with Des Cahill on Morning Ireland and even congratulations from the President.

But it was something unexpected for Déarbhla - “Definitely, it is surreal, I never thought it would get that much coverage at home. I was trying to avoid going on my phone as much as possible just to focus more on my performances. But just the reaction, it was all over social media, it was crazy, the President of Ireland even tweeted about it.”

One aspect of that coverage that got huge attention was the dancing celebrations of her parents in the stands after her bronze medal bout - “That went viral. It was great having them out there. I didn’t get to see them out in the hotel until after my fights but knowing they were there and hearing them in the crowd, it was great support.”