Adrian's January Swim Challenge for Glencar/Manor GAA Club has raised almost €3,000 so far and there are still 14 days to go 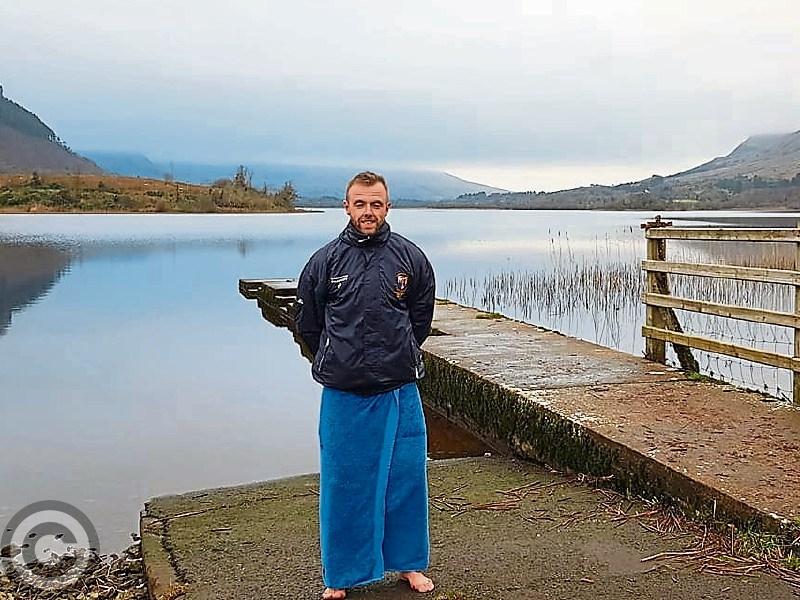 Hard to know whether to describe this as crazy or brave but former Leitrim player Adrian O'Flynn really is putting himself through the ringer in a bid to raise funds for Glencar/Manorhamilton's new pitch.

A former Leitrim footballer and four time Senior Championship winner with Glencar/ Manorhamilton, Adrian is really testing himself by swimming every day for the month of January - in either the sea or a lake!

Now consider that for a moment - we might have an unseasonably mild January but the water temperatures are considerably lower and Adrian is travelling all over Ireland to find different lakes, famous bathing spots and beaches to undertake his unique challenge.

Adrian has promised to undertake an open water swim, in lake or sea, for a minute every day for the month of January but what makes the challenge unique is that for every one euro donated, Adrian will spend an extra second in the water on the next day's swim!

That means for the more generous, or perhaps sadistic, out there, a €20 donation will see Adrian endure 20 seconds extra in the freezing waters and it gets tougher as a load of donations will mean even longer in the water.

Day one on January 1, saw Adrian spend 60 seconds in Glenade Lake and he has since swam at Seapoint, Half Moon Club and Sandymount and even persuaded his poor brother Kieran to join him on one of the days - a fact that saw the donations fly in and push his daily swim to 12 minutes!

And before you think it is all fun and games, have a look at Adrian's facebook page detailing his exploits, a shivering Adrian recounting how he is still freezing despite spending 20 minutes in the car with the heater on full blast and wearing hats and gloves! You can watch his reaction here

Appealing for donations, Adrian says “After 30 seconds blood starts to leave your fingers/toes and the cold gets nasty (scientifically-speaking). For every €1 donated, I will do an extra second in the water the next day.

Despite the self imposed torture, Adrian believes all the funds raised with have a lasting impact for Glencar/Manorhamilton GAA Club - “The €20 you donate today will have a lasting, positive impact. Much more so than any round of drinks or dinner you could order.

“So go on... give a few Euros to this fundraiser and take some enjoyment from the shivering and suffering that I will endure as a result!”

You can donate to Adrian's unique fundraising campaign on his facebook page: Adrian's January Swim Challenge for Glencar/Manor GAA Club. And remember, every euro counts for a second so be generous, or cruel, if you can!