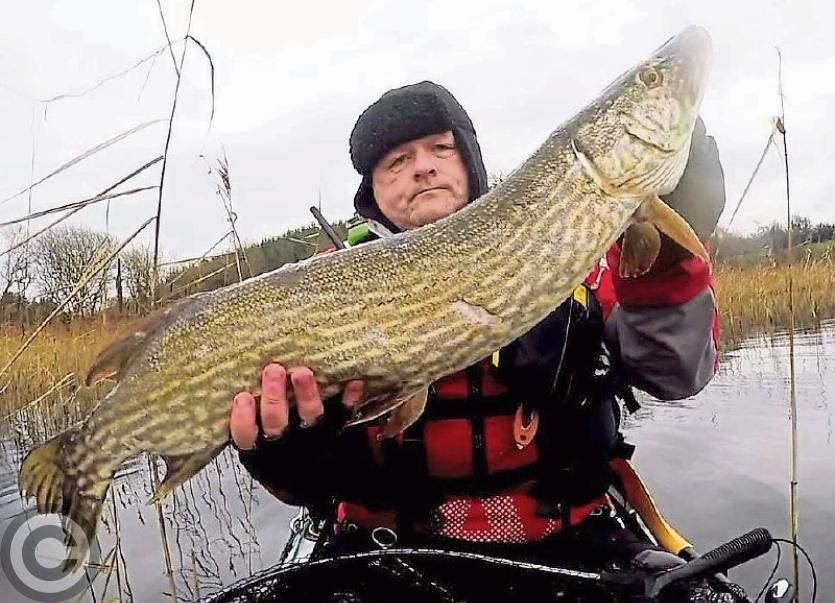 To all readers of this column, I would like to wish you all a very happy 2019. After all the fuss and rush of the Christmas period, things have quietened and slowly but surely anglers are starting to emerge to test their skills.

It was a very nice surprise to open my emails last week and discover the letter, which I have illustrated below. It is so rewarding to receive this letter and get such positive feedback.

“Dear Rinn Shannon and District Angling Club, particularly Paul Beck and those who manage Rowan Lough just outside Mohill. On behalf of six Irish Kayak Angling members a quick note to say thank you for permitting us to bring our 14 foot plastic vessels that sit about 8 inches above the water for a very enjoyable day fishing recently.

Firstly the area is spotlessly clean and credit must go to those who look after this rainbow Trout fishery, but also to fellow anglers who appreciate the time and effort that has gone into such a water and its surrounds.

Last weekend there was an international feel to our venture into the crystal clear waters! Five Irish lads and a German Angler originally from Nuremberg tried our hardest to land a winter rainbow trout or as for myself a nice pike to start 2019 off on a positive!

The lake itself was very calm with no wind at all, in fact it may have been too calm as for the first 5 hours none of us had any takes and only seeing space shoals of small fish on our fish-finders, we knew it would be a tough day.

Andy Watters (Cavan) managed to hover over a small ball of bait-fish and by means of the unusual freshwater method of jigging a lure in amongst the bait-ball managed a pike around 4lbs in pristine condition. All our Kayak anglers follow a catch photo release policy and today was no different as the young fish made its way back to the depths to get bigger and perhaps provide another angler with some sport.

I have a favourite spot on the lake where I've turned many a fish and after trolling for quite a while, decided to head to that special place to lure fish for a while in only about 2 metres of water. About 10 casts in and the unmistakable smack of an Esox and I was in for the fight!

The fish put up a strong fight and I could see almost every second of it, given the gin clear water and the shallow depth of the take! After a tussle, the fish was landed and weighed in at just over the 17lb mark.

Delighted with saving the blank, my hands and feet were perished with the damp cold (thank god it wasn't windy) and I decided to call it a day. Despite no rainbows being caught, two pike were landed and on a day like it was being very quiet for everyone else, I'll certainly take a pike or tw like this time after time. Thanking you RSDAC, we shall return.” David O’Donnovan, Irish Kayak Anglers, Dublin.

l I would also like to take this opportunity to inform you that this column shall be undergoing some changes in the next few weeks, there is a possibility that it shall become a monthly feature rather than every fortnight.

This will probably be an easier task for myself and shall give me time to gather more local angling news and photographs. I would be delighted to include any articles, competition results, photographs that you may have.

Obviously all submitted articles etc. shall be credited to the sender. This column is the only angling column in the county so any help or assistance that can be given would be much appreciated.

Until next time….. stay safe on the water and always wear a lifejacket.