Two from two for Moffett in Longford 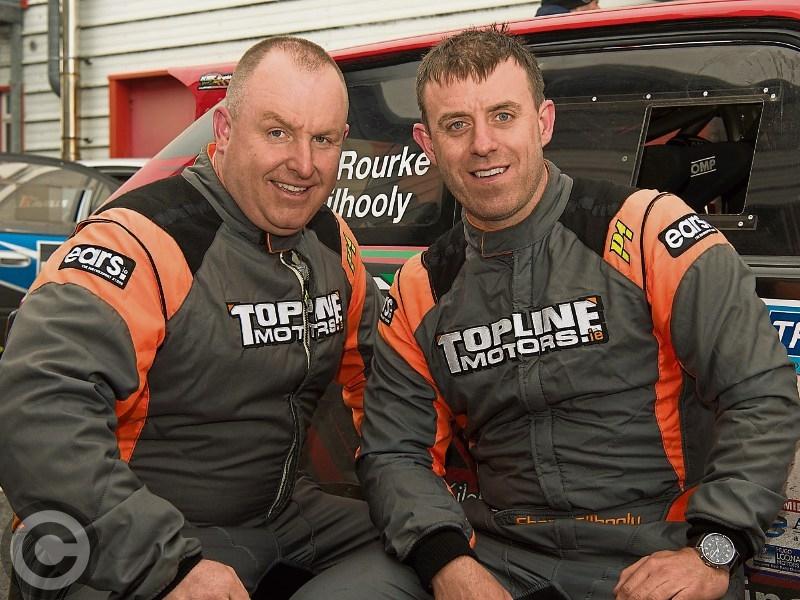 Monaghan’s Josh Moffett (Ford Fiesta WRC) and his Wexford co-driver Andy Hayes took a start to finish victory in the Admore Air Conditioning Corp Midland Moto Rally, the second round of the Triton Showers National Rally Championship that was based at the Longford Arms Hotel. The nine-stage rally was organised by the Midland Motor Club with Jeremy O’Connor as clerk of the course.

Moffett/Hayes finished a minute and twelve seconds ahead of former champions Clonmel’s Roy White and his Cork co-driver James O’Brien, also in a Ford Fiesta WRC.  Warrenpoint’s Peadar Hurson and his Monaghan co-driver Damien Connolly in yet another Fiesta WRC were 48.9 seconds further behind in third.

Carrick on Shannon’s Gavin Gallagher and co-driver Fintan Monaghan in a Mitsubishi took victory in Class 15 while Drumkerrin’s Shane O'Rourke and co-driver Alan McGovern (Mitsubishi) were fourth in Class 4.  Another Drumkeerin duo, Keelan and Dylan Griogan (Skoda Fabia) were second in Class 2.

Moffett was quickest on the opening stage by 1.4 seconds with Boyle next and a tremendous drive by Wexford’s James Stafford (Darrian T90), who revelled in the dry conditions, saw him occupy third - 8.7 seconds further behind.  The Fiesta WRC’s of Roy White and Peadar Hurson were next with Clare’s Padraig Egan in the McKinstry hired Subaru S14 WRC completing the top six.

Punching in the best time on the second stage Moffett extended his lead over Boyle to 5.1 seconds as White slotted into third, 14.6 seconds adrift of second place and eight seconds ahead of Stafford.  On the third stage, by far the longest of the event at almost 19 kilometres, Moffett was only a tenth of a second better than Boyle and arrived at the Longford service 5.2 seconds ahead of the Donegal driver.  The rally leader reckoned he had no great rhythm through S.S. 3 while his tyres showed extreme wear.

Boyle in second also had tyre troubles, he softened the suspension for the third stage while on the previous stage he claimed he was braking far too early.  White was untroubled some 24 seconds further behind but admitted he needed to be quicker.

Stafford in fourth stated that his Darrian lacked grip on part of third stage, he was 4.9 seconds ahead of Donegal’s Joe McGonigle (Mini WRC), who opined that he made a good tyre choice.  Egan completed the top six but lost a few seconds when he stalled at the start of the second stage. Meanwhile, Armagh’s Darren Gass, a late entry as he debuted a Skoda Fabia R5, occupied seventh as he acclimatised to his new surroundings.

Former national champion Peadar Hurson (Fiesta WRC) was a lowly eighth overall having overshot twice on the second stage and admitted his tyre selection was totally wrong.  Donegal’s Kevin Eves (Toyota Corolla) held second in the two-wheel drive category 26.3 seconds behind Stafford, the former had brake troubles during the opening stage. Welsh driver Hugh Hunter, on his first Irish outing in some five years (aside from a brief encounter in the ALMC Rally) completed the top ten.

Boyle was the first major casualty when he retired on the fourth stage when his Fiesta WRC clipped a bale, spun and collided with another bale that damaged a front wheel.  Without undue pressure and given that White spun on S.S. 6, Moffett arrived at the final service with a lead of a minute and one second. Stafford moved up to third but was a little worried about second gear as Hurson, with the correct tyres, gave a much better display to move into fourth.

Fifth placed McGonigle was concerned about the head gasket of his Mini WRC with Gass sixth.  The top ten also included Eves, Egan, Armstrong and JF Shovelin. Egan spun and stalled on S.S. 6.  Armstrong was also in trouble on the same stage when his Escort glanced off the tyre chicane and dented its left side.

Moffett went on to claim his second victory in as many rounds and also netted the additional Triton point for posting the fastest time on the Power Stage.  White was second and Hurson, eleventh after the second stage, made a fine recovery to secure third. Stafford won the two-wheel drive category and Devine (Mitsubishi) won the Motorsport Safety Team Group N category - 19.1 seconds ahead of Monaghan’s Shane Maguire, also in a Mitsubishi.  Garry Jennings, Niall Maguire and Gary Kiernan were amongst the non-starters.