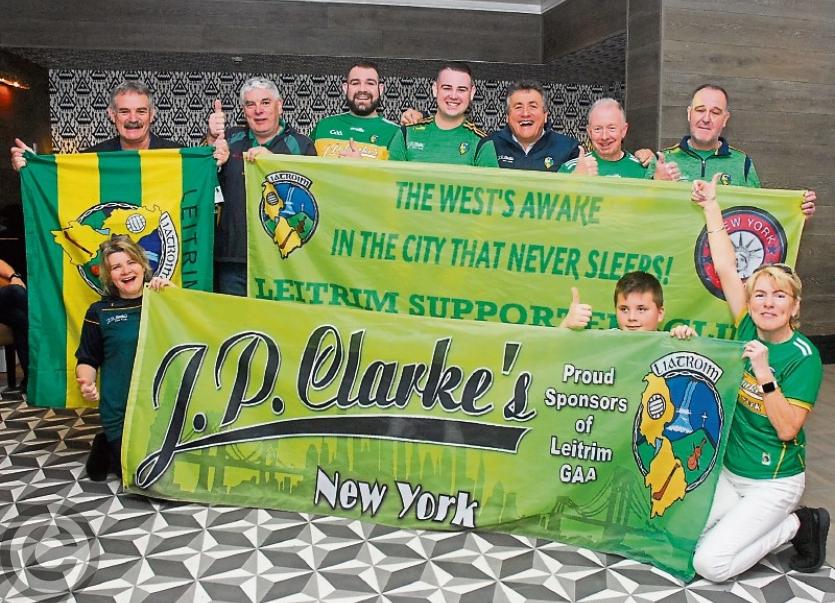 Seamus & Caitriona Clarke of J.P. Clarke's Saloon Yonkers New York pictured with some of the group that made the trip back to Ireland for the Allianz League Division 4 Final. Photo: Willie Donnellan

They came from England, they came from Dubai, New York, all over Europe to cheer on Leitrim in Croke Park last Saturday but few could have been as proud as team sponsors Seamus & Caitriona Clarke.

Seamus, a native of Gortletteragh, and Caitriona, who hails from Drumshanbo, are Leitrim’s main team sponsor with J.P. Clarke’s of Yonkers and if you really want to know what Leitrim’s run to the division 4 final meant to Leitrim exiles the world over, Seamus perfectly captured the emotion.

“I think it is probably the proudest day of my life this afternoon when Leitrim run out onto Croke Park,” Seamus told the Observer, “To see the J.P. Clarke’s jersey and to know that we played a small part in today’s occasion.

“It is a great honour for my family and Caitriona’s family, I have to pinch myself to believe that after five months of sponsorship, we’re here this afternoon and that the team will be running out wearing our jerseys.

“I think for both of us, it is one of the happiest days of our lives. Our families are so proud, it is great for everybody and apart from the sponsorship, it is just a wonderful occasion. It doesn’t happen that often and to meet everybody.

“I was here 25 years ago in 1994 when Caitriona’s brother Padraig played in that match and I haven’t been back in Croke Park since then - look there will be tears in my eyes when the team runs out.”

Seamus fittingly remembered previous sponsors on the big occasion: “I just wanted to add that we’re very proud but I think it is only fair for me to say that during the down years, when things weren’t going so well, the Bush Hotel and anybody else that was involved in sponsorship, stood with the team.

“We certainly know that we are the luckiest sponsors of any team in Ireland because five months ago, we took on the sponsorship and here we are in Croke Park.”

For a home based sponsor, there can be a tangible return on investment in sponsorship but sponsoring a team on the other side of the Atlantic, you’d have to imagine the return is minimal: “That’s a very good question - to be honest with you, it never crossed our mind that the sponsorship would increase business or give us a higher profile.

“Thanks be to God that after all those years, we could afford to get involved with Leitrim and give a little back. Both our families are steeped in Leitrim GAA.

“Caitriona’s father Leo Kenny was on the Connacht Council for years, my own brothers played for Leitrim but we were in the right place at the right time and we had the resources.

“We’re very proud. We have been involved with each Leitrim team since they started coming out to New York to play in the Connacht Championship since 2003 and this is just the extension of this relationship.

“We have to thank all our Leitrim customers because Leitrim people when they visit New York, they do come in to see us and even though I said it is not all about business, it is appreciated.”