Something for everyone in Leitrim Sports Partnership programme

Leitrim Sports Partnership, in conjunction with local clubs and facilities, is pleased to announce the following news and events 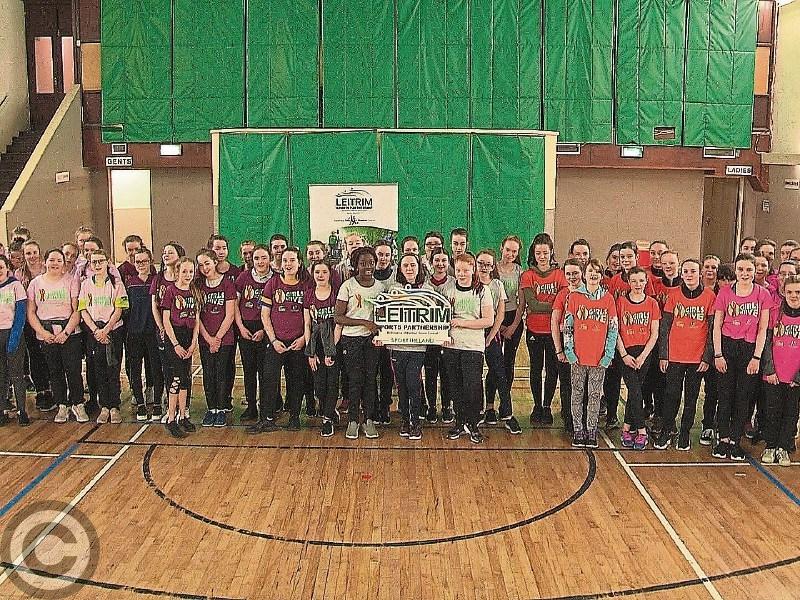 Some of the 200 girls from Mohill CC, Ballinamore CS, St Clare's CS Manorhamilton, Drumshanbo VS, Lough Allen College and Carrigallen VS who took part in the Girls Active Festival in Drumshanbo

LSP is looking to support initiatives by sports and recreation organisations in Leitrim for education/ training and participation initiatives.

Active Age Groups from all around Leitrim took part in the Go For Life Games blitz in the Mayflower Hall, Drumshanbo on March 25.

Participants had taken part in a four week training programme in Fenagh and Manorhamilton in the lead up to the Blitz and learned to play three different games skittles, flisks and bags. This programme is funded by Age & Opportunities Go For Life Games programme and we are looking forward to having a team from Leitrim travel to the National Go For Life Games event on Saturday June 8, in DCU to compete with counties from all over Ireland.

Well done to the four finalist teams from Scoil Mhuire Carrick-on-Shannon and Four Masters Kinlough who represented Leitrim in the National Inter County Festival of Sportshall Athletics held in the AIT International Arena, Athlone on Wednesday March 27. The students put in huge effort on the day and represented their county very well.

Girls Active is a physical activity programme targeted at first year girls in secondary schools throughout Leitrim. Over 200 girls from Mohill CC, Ballinamore CSl, St Clare's Manorhamilton, Drumshanbo VS, Lough Allen College and Carrigallen VSl all participated in the programme.

The girls took part in a two day physical activity festival on completion of the six week multi sports programme. The Girls Active Festival took place on April 9 & 10, in the Mayflower Drumshanbo and involved sports such as cycling, rugby, self defence, ladies gaelic football, zumba dancing and parkour. Thank you to all the coaches involved and also the teachers in each school who coordinated the programme.

Well done to Transition Year students from Ballinamore CS, Carrigallen VS and Mohill CC on taking part in the Olympic Handball blitz. Thanks to Mohill Community College for hosting the blitz and well done to Ballinamore girls and Carrigallen boys A team who came out on top in a thriller final where they pushed the Ballinamore boys team to compete to the final whistle. Thanks also to Pat and Paul who have been coaching Olympic Handball with all the schools over the previous four weeks.

The objective of Bike Week is to celebrate cycling in all its forms and to get more people participating in cycling both for transport and recreation. The type of groups which may apply are community groups, voluntary organisations, schools, sports clubs, active retirement groups, community childcare service providers, work places or any group that wishes to organise a bike related event on a ‘not for profit basis’ during Bike Week 2019.

Paddles up is a beginner kayaking programme for transition year groups which is rolled out with the support of funding from Waterways Ireland. Students from both Mohill CC and Ballinamore CS have been learning kayaking skills over the last number of weeks in the lead up to a finals day in May.

Kids on the Run, Women on the water & Lads on the lake, Shannon Splash, Women on Wheels, Body and Soul Day, Go for Life Games National Blitz day and Bike week are some of the exciting programmes we have coming up in the future. For further information on any of these programmes please contact us by telephoning 071 9650498 or emailing sports@leitrimcoco.ie.

Leitrim Sports Partnership are running a safeguarding 3 course on Thursday May 9 from 7pm-10pm in Leitrim County Council offices. A person appointed to the Designated Liaison Person position in a club must have completed the Child Welfare & Protection Basic Awareness Course and should complete the NEW Designated Liaison Person 3 hour workshop. A club may appoint the same person to both the CCO and DLP positions however best practice advises that they are kept as separate roles. The course costs €20 per person and to book your place contact LSP on 0719650498 or email sports@leitrimcoco.ie

Increase your cycling ability through the Women on Wheels programme. This programme aims to take participants from beginner level cycling to 30k over an eight week programme. The programme is open to women 18 years and over who have their own bike and helmet and some recreational cycling experience. The programme will begin on Wednesday May 8, at 7pm in Aura Leisure Centre car park with an initial bike and cycling assessment. The programme will run every Monday and Wednesday at 7pm from Carrick on Shannon for eight weeks. The programme costs €30 per person for a total of 16 sessions. To book, call Leitrim Sports Partnership on 0719650498 or email sports@leitrimcoco.ie