When did The Kingdom become the underdogs? 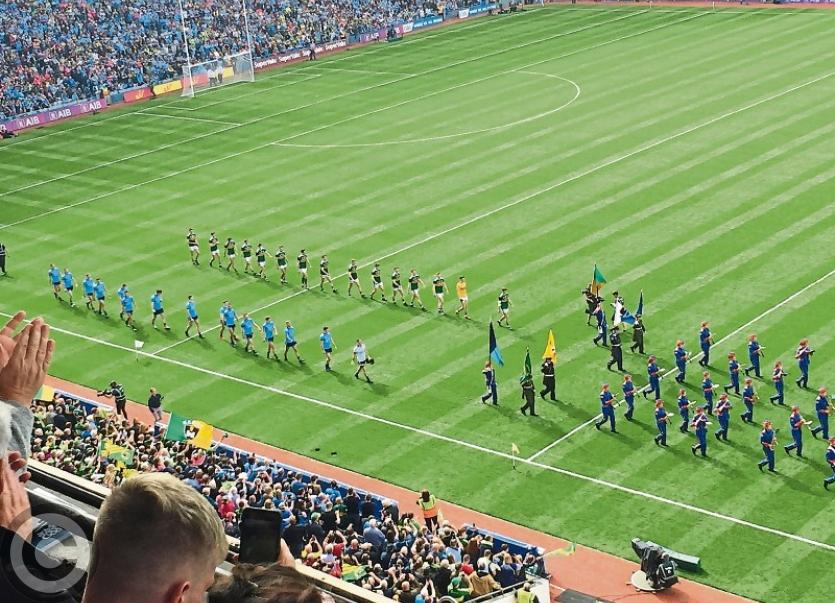 Maybe it was the Green & Gold jerseys but sitting high up in the upper tier of the Cusack Stand last Sunday, I couldn't help but notice that almost all the Leitrim folk around me were not just cheering but vociferously roaring on The Kingdom!

Colin Regan and Philip Rooney's recent musing in these very pages had me wondering what was going on but the sight of photographer extraordinaire James Molloy jumping up and down cheering on Killian Spillane's brilliant goal that brought it home for this admittedly mad Dublin supporter!

READ: Can the Dublin juggernaut be stopped

James, and his son, were far from the only Leitrim fans jumping up and down, although I did my fair share of that too as Cloone's Sean McGovern will testify, Sean perhaps wondering where the relatively quiet man from the press box in Cloone had gone, transformed into a roaring Dub!

Surely Aughawillan would get behind the Dubs with the whole Declan Darcy connection, so brilliantly captured in a wonderful article on Pundit Arena last Saturday but no, there was Fergal and Rory McTague cheering on the Kingdom just across the aisle from me, one even sporting Green & Gold colours on a ribbon on his wrist - oh, the heresy!

It's not that Kerry are exactly you're normal sort of underdogs, not like Leitrim anyway - 37 All-Ireland Senior titles, five in a row Minor crowns, complete and utter domination of the All-Ireland Club Intermediate and Junior competition and a history that no county, not even the Dubs, can match. The poor craturs, purveyors of An Beal Bocht nonpareil, have only won Sam Maguire once in the last ten years and it is a famine! If only Leitrim could have such a famine!

It wasn't that long ago that the Dubs were the underdogs and, to be honest, it didn't wash with me then. Everyone telling you a Dubs win would be “good for the game” gets a little wearisome and feels kind of condesending for you get what you earn in any sport, not what you might deserve.

Anyway, I'll get over it, with time a great healer, although the next time the Willies tell me not to make them favourites for a match, well let me tell you .....

But the football final really is a day for the entire country - there is a mythising that goes on about the hurling final and it's place in Irish life and there's no doubt that it is a day to celebrate a truly unique and Irish sport. But there is also a certain sense that it is a day that can only be enjoyed by the true hurling community, football philistines not allowed!

The football final feels earthier, the spread of jerseys and club jackets a truer reflection of the GAA with every club and country represented and more than a few from abroad, from the Cork fan beside me shaking his head at another free for Kerry, the couple of Rossies in their de-rigueur Club Rossie gear to chatting to a few Armagh folk in the small streets outside Croke Park.

Now I wasn't wandering very far from my own seat, the nerves wouldn't allow it to be honest but I didn't have very far to go to meet or see Leitrim folk, after all Leitrim Village's Seamus Regan was sitting beside me with Rory Duignan from Drumkeerin a couple of rows and seats away.

Leitrim team sponsor Seamus Clarke also made it to Croke Park from New York for the second time this year, even handing me an 'Up the Dubs' badge while former Leitrim star Barry McWeeney was heading one way and me the other on the way out of the stadium!

The match itself - everyone tells me it was a classic and you know it probably was but to me, it was gut wrenching 80 minutes of nerve shredding anxiety. I'll not go on about the match, laws of libel, etc, etc but any true Dublin fan wasn't surprised by Kerry's performance, after all we've been on the receiving end of them for years - after all, Kerry are Kerry!

The crazy odds and almost universal backing of the Dubs after their 10 point semi-final demolition over Mayo conveniently ignores the fact that Kerry also beat Mayo by ten points!

Now the guessing game starts again - who learns most, who can improve, what adjustments will be made, who'll get a good night's sleep before the final! All we can hope is that we get another game as good as last Sunday's and, for this transplanted Dub, a Dublin win!