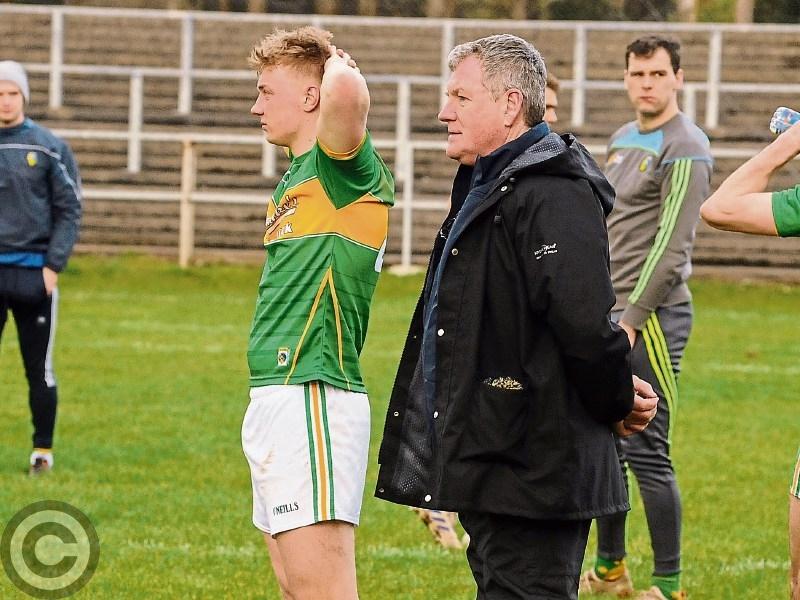 Not an easy job, trying to find positives in the face of a demoralising defeat, but Terry Hyland managed to do just that last Sunday when he faced the media following the eight point loss to Offaly in Avantcard Pairc Sean Mac Diarmada.

A naturally positive outlook for Hyland meant that the Cavan native saw plenty of positives in Leitrim's display but there was also an underlying sense of frustration, maybe even annoyance, at the mistakes and mental errors that are costing the Green & Gold so dearly in this Allianz NFL Division 3 campaign.

“Disappointing yes but to be fair, up to the sending off, we were in control of the game,” replied the Leitrim manager when asked for his initial reaction, “It was a one point gap at that stage and I thought that we would kick on as we were playing with a bit of a breeze.

“We opened brightly but I think we had five wides in the first six minutes of the second half and ultimately, that was what cost us as much as anything else.”

Games against Longford and Offaly, considered by Leitrim fans as must win games, have brought heavy defeats and while the Leitrim boss never publicly highlights one game more than the other, Terry agrees that Leitrim have to start winning right now.

“Today was a four pointer in one sense but they are all must win games from now on, we just need to get points on the board. For 50-55 minutes and even against Longford, we are still in the game and we’re doing a lot of good stuff but unfortunately our errors are murdering us and we have to stop doing that.

“We end up then being reactive instead of proactive - we end up being caught in the forward line, the ball turned over and everybody has to start racing back when, with a little bit more composure on the ball, that wouldn’t happen.”

Positive he may be but Hyland is also a realist and he knows that Leitrim errors contributed heavily to his team’s loss: “We did create the chances but it (wides) is something we have to look at. I always say that when you go out in a match, the most important muscle is your brain and if you don’t engage it, the players themselves have to stand up and do that.

“Normally we would have finished those and whether it was we just raced out after the break and wanted to finish the game in the first five minutes. We didn’t do it and it knocked us back on our heels. They are all positives, we created the chances but unfortunately we didn’t finish them.”

Errors that might avoid punishment in Division 4 are being harshly punished at the higher level: “Keith got caught on two of them and they ended up with scores on the other end, that ball after travelling 100 yards. Somebody should be putting a stop to it in the middle but sometimes I think it was maybe more feeling sorry for ourselves and not reacting fast enough and getting it sorted, giving them that four or five yards head start and we’re getting caught.”

The game turned on a couple of incidents - the sending off of Shane Quinn and Offaly’s first goal three minutes later: “You could see when they went down a man in the first half to the black card, the difference when you play with the extra man. In the modern game, teams will keep the ball and punish you and you use up an awful lot of energy chasing around after the ball, trying to get your hands on it.

“We just couldn’t get that little bit of a gap in the game, that would give us a bit of breathing space. Even with the sending off, a gap gives you a bit of time to get organised. But unfortunately we didn’t do that.

Those sort of mental errors were punished heavily by Offaly’s goals according to Hyland: “Particularly with the second one, again we seemed to get caught not pushing out when we had bodies in the area. It is not for the want of saying it, not for the want of doing it in training. We do get back there but we just don’t commit to where the ball is.

The return of Ryan O’Rourke and Mark Plunkett is a big boost: “Ryan is only coming back to be fair to him and even before the game, we had to give him a run out to see if he was fit to start and he is a quality player. We just need to get more into him. We put on Mark Plunkett near the end to get a bit into his legs as well.

“We were short those lads up until now, they are starting to come back in now and hopefully, it is not too late for Leitrim. We were missing those good players. Attack wise, we were very good in the first half, everything we done worked well in the first half.

“We probably could have had two goals in the first half, we had two opportunities, we didn’t take them - they don’t give you any claps on the back for not taking those chances.”

Terry believes that Leitrim have a lot left to fight for and that survival in Division 3 is still in Leitrim’s hands: “They have three games, they have lots to fight for. At the end of the day, it is still in their own hands. As I said at the start, if we can cut out the mistakes and build on the good stuff and there was lots of good stuff in that game but when we make mistakes, the opposition seem to get serious scores against us.

“Whether it is a mental thing in that ‘here we go again’ and drop the heads type of scenario, I don’t know why it is. Everything up to those mistakes has been good but we just have to go back to the training pitch and work on it again.”