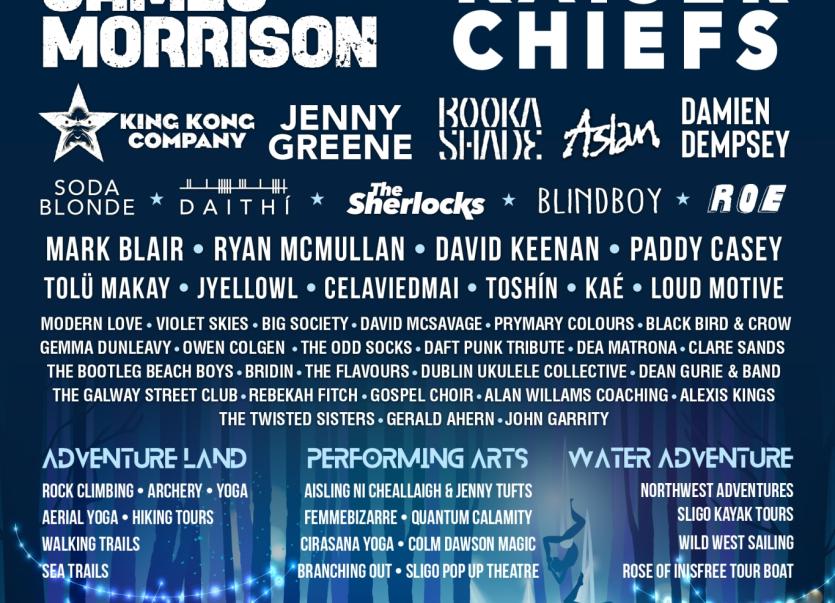 New dates have been announced for the inaugural Wild Roots Music and Adventure Festival.

The Sligo event, which was previously scheduled for the May Bank Holiday weekend, will now take place August 13-15th. Organisers of the family-friendly festival, which will include performances from the Kaiser Chiefs, Damien Dempsey, James Morrison, and King Kong Company, have also revealed that a host of new Irish acts will be joining the line-up.

Amongst the new acts announced, Afro-Irish singer, Tolü Makay, whose new single “Used To Be” was released this year will be performing. As will, Dublin hip-hop group Loud Motive, Galway rapper Celaviedmai and the pop-funk sensation Toshín. The hip-hop acts JyellowL and KAÉ have also been confirmed.

Commenting on the announcement Festival Director, Neil O’Connell remarked: “The rescheduled dates will allow for the vaccination rollout to take effect and for the safe reopening of the Live events sector. As a small boutique festival spread across a large festival site, we are in a strong position to be the first festival of the year. All of our acts have moved with us to our new dates and we are delighted to welcome a host of new performers to the line-up. With our latest acts, we wanted to acknowledge the incredible social and cultural diversity within the Irish music scene. We can’t wait to welcome everyone to the lake.”

Wild Roots is a new boutique festival that celebrates music, performing arts and outdoor adventure. The event will take place on the freshwater lake of Lough Gill, Co. Sligo made famous by W.B Yeats. Festival patrons can sample a range of outdoor activities including boat rides, kayaking, rock climbing and aerial yoga. Other musical highlights will include Soda Blonde, Daithí, Booka Shade and Mark Blair.