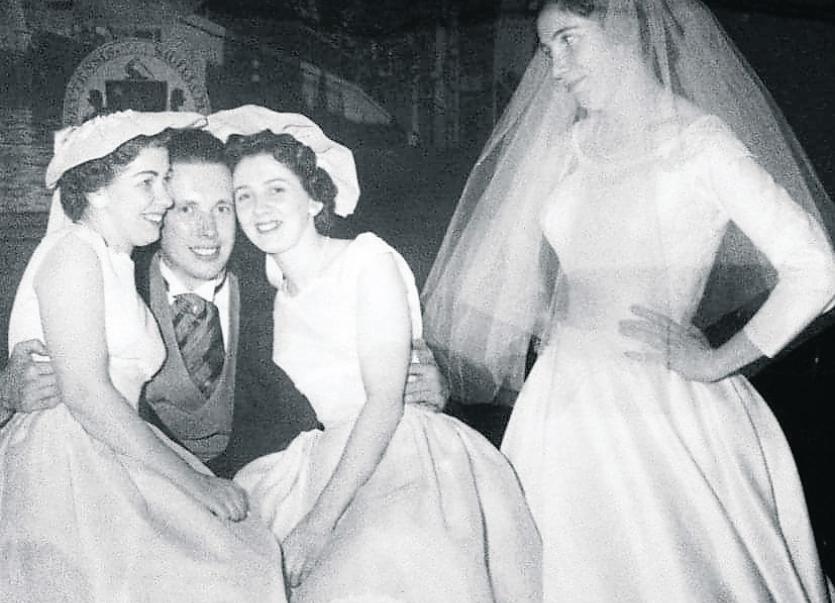 Mary Foley on her wedding day. See below for full details

Kathy Simmons, who lives in New York, is the daughter of a Cloone woman.

The well known website Irish Central recently asked readers to send in their 'Love Letter to Ireland' and Kathleen wrote a very poignant piece about her mother and ended up taking first prize.

This is her story:
Dear Ireland, It is not your distinct and lonesome scent of burning peat from distant cottages. Nor your fields of brilliant green. It is not the decades old waterfalls and winding rivers whose beauty inspire poets or your majestic cliffs that stand like loyal sentry men over the wild Irish Sea.
It was not the magical taste of my very first ninety-nine ice cream cone with a flake bar neatly tucked atop. All of these things which you have given me I have loved. But none compare to my most prized possession. How do I thank you for the gift of a mother who almost never was?

I would start at the beginning as stories often do and tell you of a girl named Mary Foley from Cloone, County Leitrim, tomboy by nature, explorer by heart. Who at age nine for reasons unknown, contracted Rheumatic Fever. As the days turned into night and her fever raged on, hope began to fade. A local priest was summoned to give her last rites. But then dear Eire, I would tell you of a miracle. My grandmother Rose heard of an old man who lived alone in the countryside. A man said to have the gift of healing. And on that very day, desperate and determined, a mother walked seven miles to see him and tell him of her daughter’s plight.

As they sat together solemnly in his stark thatched cottage the old man spoke, “your daughter will get well, but in her place an animal will die.” As the sun rose the next morning in Drumharkan, Glebe a rooster crowed and a child’s fever broke. And in the stillness of the barnyard a cow lay dead. And that was the day I got my mother back.
She left her home in Cloone to become a maternity nurse at St Vincent’s hospital in NYC, was married and raised four daughters, though her heart never strayed from Ireland. I can still envision her singing and tapping her feet to a favorite Clancy Brother’s tune in our Long Island kitchen. “I’ll tell my ma when I go home, the boys won’t leave the girls alone…” Her best friend and first cousin Lily would visit often. I would arrive home from school to the sound of laughter and the whirr of the blender concocting their favorite orange daiquiris as they talked of memories of home.

My mother was fiercely independent, stubborn and determined but above all loved by all who knew her. She took her road test late in life and after her eighth go proudly waved the coveted certificate before us announcing she had passed – never mind how long it took her. I remember her driving instructor, now a close friend, nodding enthusiastically in approval as he sat sipping tea and eating a slice of her famous apple pie.

Though my parents settled in the U.S. they celebrated their Irish heritage each and every day. My father was General Manager of Rosie O’Grady’s restaurant in midtown Manhattan, a haven for all those Irish or those who wished to be. An Irish band played nightly and my father never failed to have the band sing 'Lovely Leitrim' when my mother would visit.
During summers my father would rent a house for two weeks in a suburb of Dublin. My love for Ireland was solidified during those summers. I recall the misty weather and our Irish friends announcing “a heat wave” once the temperature reached 70 degrees as they ran to the beach.

One summer, my father took us to a nearby farm where we picked out an Irish Wolf Hound pup we named Connell. My mother and Connell became inseparable and were a familiar sight around town; she driving and Connell sitting tall in the passenger seat. Each St. Patrick’s Day, my mother and Connell would travel to New York City to proudly march side by side in the parade. A tradition they shared till Connell’s death at age six - Wolf hounds do not live long due to the size of their huge heart…

My mother Mary like her beloved Connell, left us too soon. At her wake, an old man who I did not know walked in and quietly sat in the back of the chapel. As the hours wore on and the crowd thinned, he approached me to pay his respects. “My name is Michael Dillon. I lived in the same town as your lovely mother and we walked to school every day. Then one day, she got very sick and I didn’t see her for many weeks.”

As he turned to leave, he paused, then added: “but your mother got well and a strange thing happened. A cow died.” And in that moment a legend I had heard for so many years became a truth and my gratitude for having her as a mother forever realized. And for that Dear Ireland I thank you.

Picture details: Kathy explains this photo was taken at the historic Roosevelt hotel in NYC on her parent’s wedding day. “Both of my mother’s bridesmaids were her first cousins and were sisters, all from Leitrim. Left is Bernadette Doherty currently living in the U.S., far right is Margaret Doherty, currently living in Fenagh. A third Doherty sister, Elizabeth (Lily) who now lives in U.S. was unable to be a bridesmaid but was my mother’s best friend throughout her life. The lucky middle fellow is my dad.”