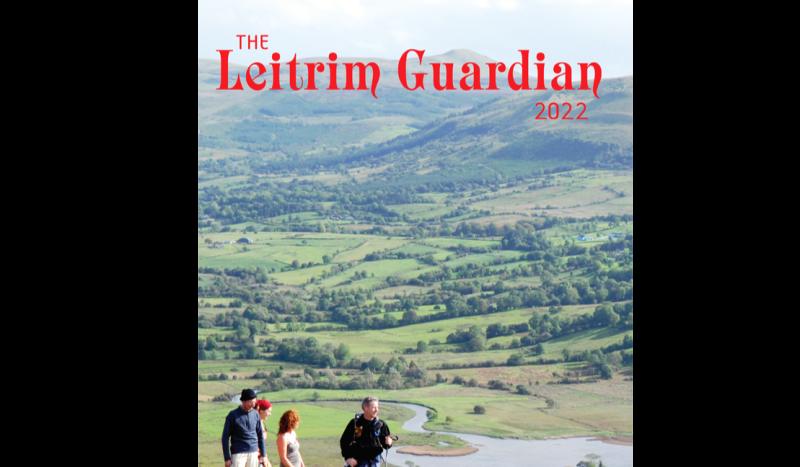 The 2022 issue of the Leitrim Guardian is in the shops now, and what an amazing array it is of prose, poetry and photographs from virtually every part of the county and from many topics of interest.
Editor Tommy Moran and the organising committee deserve great praise for giving us so much joy, amazement and pride at what our county has to offer. For anyone with an interest in Leitrim, whether at home or abroad, the magazine will be a very welcome gift, giving hours of satisfaction and enlightenment.

It opens with a thoughtful editorial linking the hallowed concepts of faith, hope and charity to the modern era. This is followed by an introduction to the Leitrim Guardian 2022 Person of the Year, Aughnasheelin native Pat Gallagher, who has spent most of his working life excelling at industrial enterprise in Britain, and at the same time providing employment and giving generously to different charities.

Thereafter you will find over ninety articles, essays and poems, interspersed with a treasure chest of truly lovely photographs. There are wonderful pieces about facets of Leitrim’s history, from Sarsfield’s encampment at Manorhamilton in 1689, to local Hedge schools after the Penal times; and from the march of O’Sullivan Beara in 1603 to the tragedy of Selton Hill. Leitrim historian Dr Patrick McGarty also has a spirited piece entitled ‘From Truce to Treaty’ on the lead in to the establishment of the Irish Free State in the early 1920s.

Sport also gets a good look in, with a magnificent two-page spread of photos of this year’s Champion teams from throughout Leitrim; a presentation of the role that people with Leitrim connections have made to the Dublin Ladies GAA teams; a review of participants from Leitrim in the Irish Olympic story over the past century; a witty piece by Peter Gordon entitled, ‘The Longest Game’; and a touching homage to Leitrim’s famous ‘footballing twins,’ Packie McGarty and Cathal Flynn.
The practicalities of country living are featured as well, with articles on the Credit Unions in the county; the Kinlough Community Centre and Community Garden; Farming in Leitrim; and the ‘Bóthar na Naomh’ walkway in Cloone.

Of particular note are the many high-quality contributions from Leitrim’s young people in the fields of music, writing, poetry and art. These bright minds give us hope for the continuity of arts and culture into the next generation. In addition the magazine carries a beautiful report on the inspiring story of Ballinamore’s Rebeccalee McDermott and her fundraising for the Children’s Hospital in Temple Street, Dublin.

The magazine also highlights the work of many local writers, with generous coverage given to recently published books, as well as some lovely essays, reminiscences and poems, and a significant piece by Professor ML O’Rourke of Trinity College Dublin on the healing power of books.

Also of note are the contributions from Leitrim people overseas, with pieces from New York; San Francisco; Minnesota; Malawi (central Africa); the Queen’s honours list in the UK; the Philippines; and two articles connected in one way or another to the Vatican, accompanied by photos of Leitrim people giving advice to Pope Francis and talking to a previous pope, John Paul II.

Other outstanding highlights include articles about disabilities in general and Down Syndrome in particular; ‘Memories of the Corncrake’ by a member of the Ballinamore Writers Group; information about postcards with messages in embroidered silk, that soldiers on the Western Front during the First World War had sent to their wives and girlfriends; and the story of how local artist Sinead Guckian painted the 1916 masterpiece, ‘Her Surrender’.

If you are looking for a great way to pass the long, dark winter nights that lie ahead of us, just light a fire in the grate and snuggle up with the 2022 Leitrim Guardian. It will carry you to every nook and cranny of this wonderful county of ours, thrilling you with things you would never otherwise have known and renewing your appreciation for everything cultural, sporting, historical and literary. It is available now in many shops throughout Leitrim, and also online at www.leitrimguardian.ie. At €15 a copy, it is money well spent.