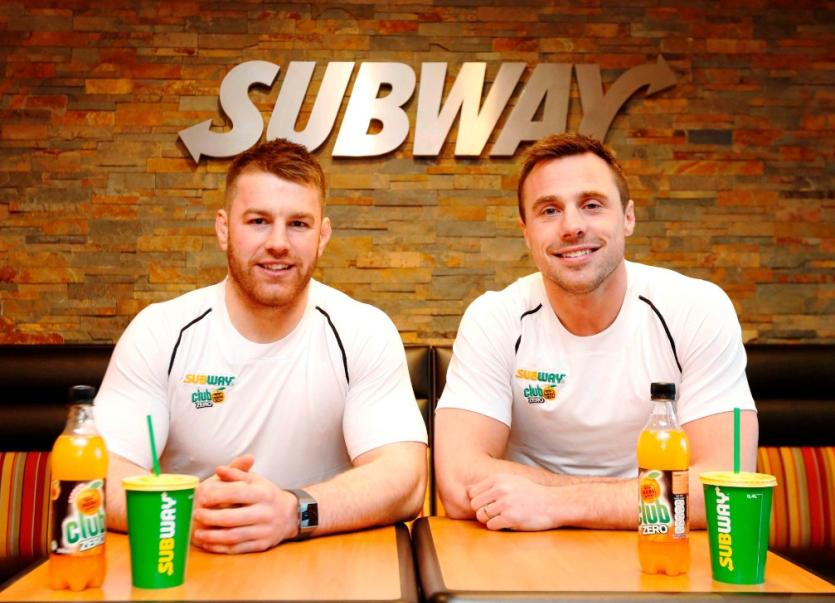 Tommy Bowe and Sean O'Brien, pictured at the launch of the Subway® and Club Zero Orange 'Tasty Trip Down Under' competition

This March, Subway and Club Zero Orange have joined forces with international rugby players Tommy Bowe and Sean O’Brien to launch an exclusive competition offering rugby fans the chance of winning a once-in-a-lifetime trip to Australia.

The rugby legends swapped their rugby boots to take part in some unexpected lunchtime banter in a local Subway.  Both players took part in a hidden camera style stunt and for one lunchtime only, assumed the role of live sports commentators, offering their unique ‘live action’ analysis of customers as they ordered their chosen Subs.

The rugby duo has teamed up with Subway and Club Zero Orange to give two lucky rugby fans and their friends the chance to win a trip of a lifetime to travel to Australia this June to watch the boys in green play in Australia.

Customers can enter the competition by scanning their Subcard at participating Subway stores in Republic of Ireland and Northern Ireland and answering an element of skill question online at subcard.subway.co.uk until April 5.

This experience would be absolutely life-changing for any rugby fan, and entry is easy. Consumers can simply download the Subcard app, visit their local Subway store in the Republic of Ireland and Northern Ireland and answer a quick question to be in with a chance of winning. The Subcard app is available for download on iPhone and Android.

Speaking about the campaign, Tommy Bowe said “I’m delighted to be involved in such a great campaign from Subway and Club Zero Orange, giving rugby fans on the island of Ireland the chance to win a trip of a lifetime this summer. Sean and I had such a laugh surprising fans while they were ordering their Subs”

Sean O’Brien said “Myself and Tommy have a great relationship on and off the rugby pitch and I was excited to work with him on the Subway and Club Zero Orange ‘Tasty Trip Down Under’ campaign. The look on the customers’ faces was priceless when we started commentating on their toppings for their Subs – it was a genius lunchtime twist.”

Visit the subcard.subway.co.uk to keep up to date on details of the competition.