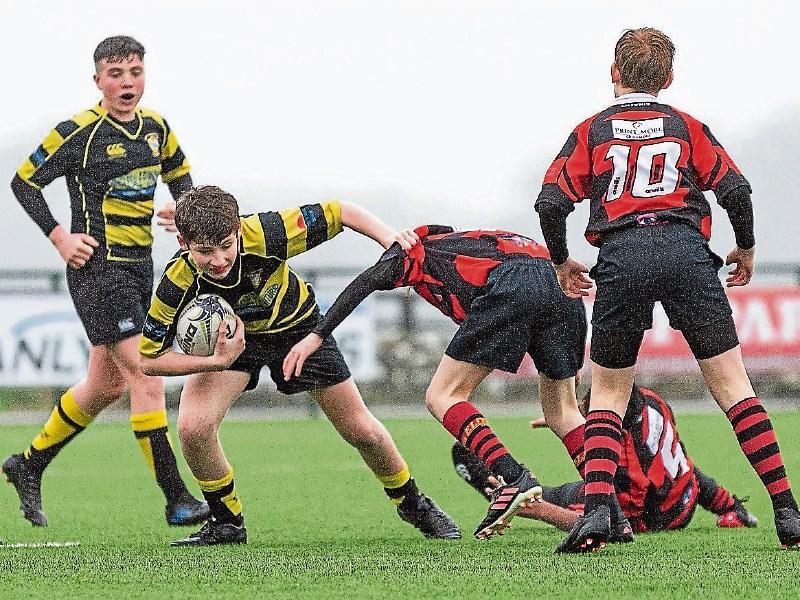 What a game on Saturday at home on the Carrick pitch between great rivals, Carrick and Gort U13s doing battle with the home team winning out 25-17.

Carrick were five points up early on after sterling work by the forwards led brilliantly by the captain for the day, Alvaro di Santiago who gave a terrific performance throughout. Joshua Bosquette went on one of his by now trademark solo runs after good work by the backs and touched down very well near the posts but the conversion was missed.

Gort replied with a terrific team try of their own which was converted. It was nip and tuck in the slippy conditions but Carrick's superior scrum soon paid dividends with another well worked try.

After another dominant scrum where Carrick gained 30 metres, the ball ended up in the hands of Malachy Glover who left all in his wake when going on a superb solo run. Glover was finally stopped a few metres short and Krystian Kopczynski was in support and the flanker touched down.

Gort came back but great tackling by Tomas Killian, Solomon Gleeson and the outstanding Malachy Glover ensured that Gort were kept at bay. Carrick's stronger scrummaging was paying dividends and John Mee, after great passes from Rory Connaughton and Killian, weaved his way forward and touched down to make it 15-7.

Gort just wouldn't go away and they scored another very well worked forwards try which was touched down near the posts with about 10 minutes left. The score was now at 15-12.

Carrick rang the changes for the final 10 minutes and the fresh legs made the difference. The try of the day came when Dylan McKiernan caught Gort out beautifully by passing to Glover on the blindside who weaved his way past four Gort defenders to touch down for Carrick's fourth try. 20-12 to Carrick.

But Gort weren't finished and after repeated scrums and Carrick's ability to shoot themselves in the foot by not applying the ten yard rule, Gort worked the ball forward and deservedly crashed over the line to make 20- 17.

The tackle of the day came from Aaron Gavin who took down the huge Gort flanker when his team needed it most.

Nothing in it! But Carrick finished off Gort with a few minutes left when sub full back Theo Gately, after a great strong run through the opposition defence, set up Hugh McGovern who ran on for a terrific try in the corner. A great game played in a great, competitive spirit.